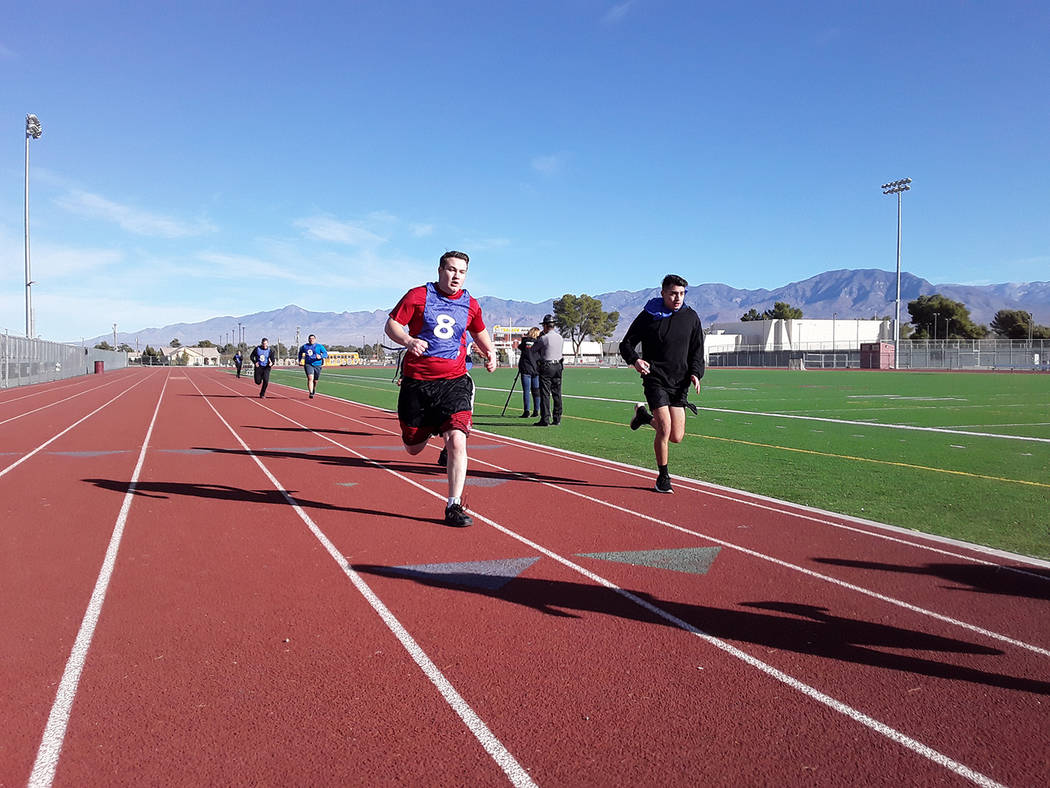 Selwyn Harris/Pahrump Valley Times Applicants at the Nevada Department of Public Safety's (DPS), hiring event must finish the 300 meter run in at least 82 seconds to qualify in the physical fitness portion. 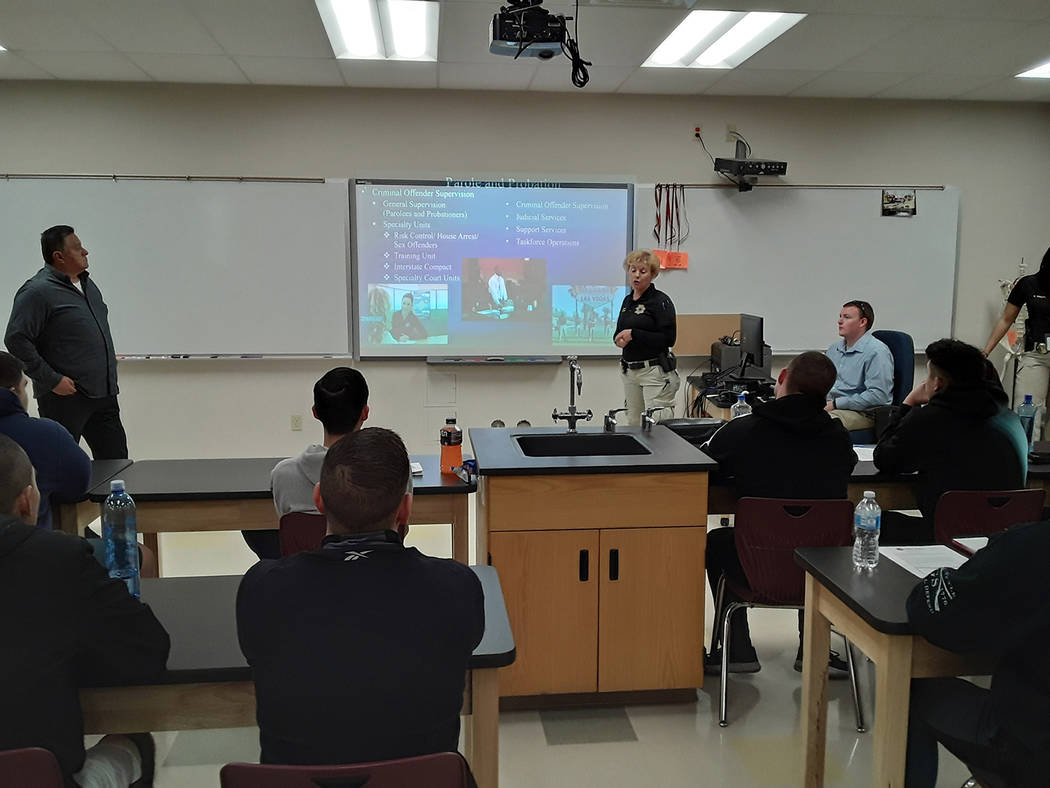 Selwyn Harris/Pahrump Valley Times Once the applicant pass the written exam, applicants move forward to the oral board interviews. Applicants must be at least 21 years of age, with no felony convictions, as part of the minimum qualifications. 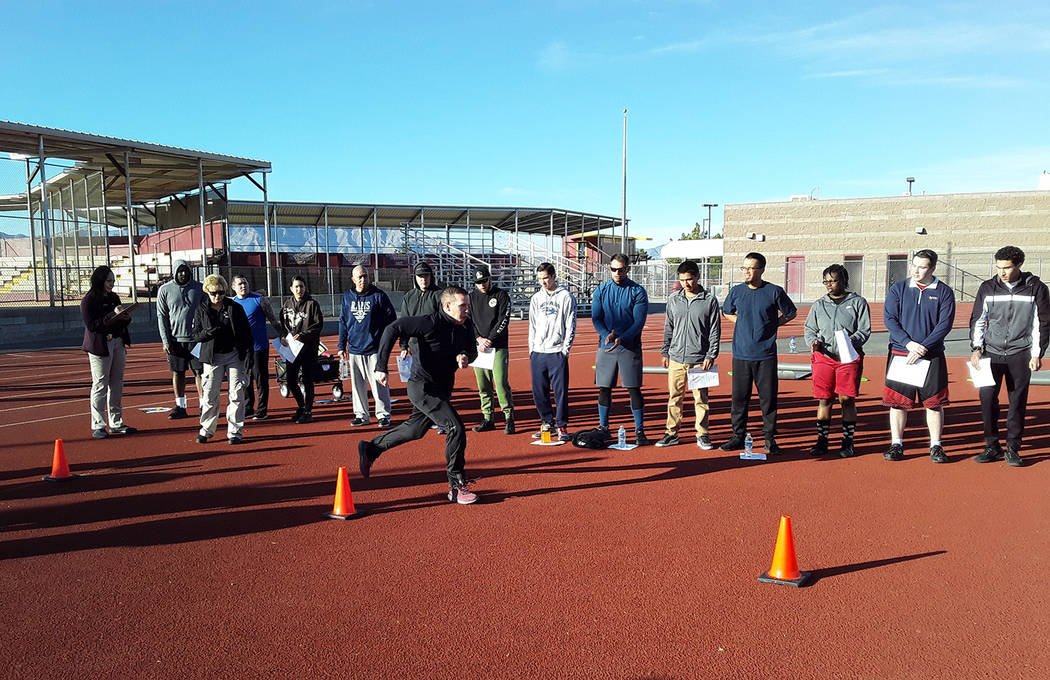 The Nevada Department of Public Safety, (DPS) is now looking for a few good men and women to serve as career law enforcement officers.

On Saturday morning, Jan. 25, a hiring event was hosted at Pahrump Valley High School, where roughly two dozen applicants were put through their respective paces on both the athletic field and in the classroom.

It should be noted that DPS encompasses a variety of agencies in the Silver State, including the Nevada Highway Patrol, Parole and Probation, Capitol Police, the State Fire Marshal’s Office and the Nevada Department of Investigations.

Sgt. Mallory Triplett is an 8-year veteran of the DPS’ Parole and Probation office.

She, along with Sgt. Shaira Chandler, also from Parole and Probation, supervised much of the physical fitness portion of the event.

Triplett said the DPS hiring process has changed when compared to past hiring events, which would take roughly three to five months.

“Today is a little unique because they are shortening that time a little bit because we are actually doing oral boards here, which usually is seven to 10 days after the physical training test and the written test,” she said. “They kind of have that luxury of a few weeks cut-off for that, with this being a one-day process. It has really become a pilot program and it seems to be going really well so far and they are very receptive to it.”

Sgt. Chandler, meanwhile, spoke about qualifying factors and what occurs after the physical tests.

“They will have about two-and-a-half to three hours to take the written exam, and if they pass that, they move forward to the oral board interviews,” she said. “The minimum qualifications for an officer are that they must be at least 21 years of age and they don’t want to have a criminal background with felonies. Obviously people have had traffic violations and things of that nature, but we don’t hold that against them.”

Chandler also spoke about factors which can give an applicant an advantage over others.

“College is great to have but they don’t have to have it,” she noted. “It’s good to have because it helps with the point system in the interview process. Military is also great, and we have a lot of past and current members of the military, so that’s a great qualification to have.”

Once an applicant successfully completes the first round of the hiring process, Triplett said, they will move on to the DPS academy, which is 17 weeks from start to finish.

“During that time all of the cadets will learn everything that is post required,” she said. “There are also a lot of team-building exercises that they do on top of the class work, that goes into building relationships that these cadets will have with each other throughout their careers.”

As far as living quarters are concerned during the academy, Chandler said it varies from Southern Nevada to Northern Nevada.

“We don’t have accommodations in Las Vegas, but they can live in their homes, and a lot of people have done that,” she said. “Up north, we do provide dorms where they have a place to stay and sleep throughout that time frame, and they also have a kitchen to cook their meals. Weekends are for them, so if they are up north and they choose to drive down to Las Vegas they do have that opportunity.”

Sgt. Carlos Rivera, is a 25-year veteran of the Nevada Highway Patrol.

While watching the physical training exercises, Rivera recalled his time at the academy, more than a quarter-century ago.

“It brought back a lot of memories when I was testing from out of state back in 1994, and this speaks volumes about how the department has grown, especially coming out to these rural areas. This says a lot about the department and what kind of agency they can expect.”

Regarding his longevity with the Nevada Highway Patrol, Rivera gave credit to his family for their ongoing support.

Sgt. Triplett, meanwhile, said she was glad to see the applicants supporting each other during Saturday’s event.

“It was good to see the applicants encouraging each other during their physical training tests, because that is one of the things that we as officers and supervisors look for when we are doing these tests,” she said. “It’s about being committed to the program. Some of these people have never met before in their lives and for them to meet them on this first day and build those kinds of relationships is really good to see because it really shows what’s possible in the future for them.”

Kariym Azeez moved to Las Vegas back in December from Vermont, where he was a police officer since 2017.

Azeez spoke about the newly arranged hiring event where much of the testing is completed in a shorter amount of time.

“In one day, you get informed, do your physical, the written test and the interview, all in one day,” he said. “I think it’s perfect, rather than doing it on multiple days. Why waste time when you can just knock it all out in one day. I’m interested in the Probation and Parole Division, because I definitely want to work more with people that are high risk. I want to try to get them to better themselves to come back into society. I’m 29 years old now and I don’t have what I used to have, but I still have some spring in my legs. Compared to Vermont, I love Southern Nevada. The weather is very nice but it was chilly this morning. I love it out here and I hope to contribute to my community and the state of Nevada.”

Out of the two dozen candidates undertaking the fitness test, Sgt. Chandler lamented that three applicants did not pass muster.

“We lost one on the vertical jump, we lost another one on push-ups, and we lost another one in the 300-meter sprint,” she said. “They can always reapply and we highly encourage that. Now that they’ve seen it and kind of know what to expect, they can start practicing those tests and they have the opportunity to come back another day and time.”

For those who missed last weekend’s hiring event, DPS Public Information Officer Kim Smith said the agency hosts the events throughout the year.

“You can go to our website, which is nevadadpscareers.com, and you can find the entire list of all the hiring events that will be happening,” she noted. “We really want to get great candidates and we are actively seeking new law enforcement personnel, because we have people who retire. Actually, some people retire from other careers and this becomes their second career, so we do have openings and the great thing is that you can move around the state. If folks want tips on how to prepare for the next hiring event, we have a lot of information on our website. They can watch the videos and actually see what they’re going to have to do, so they can prepare for it.”