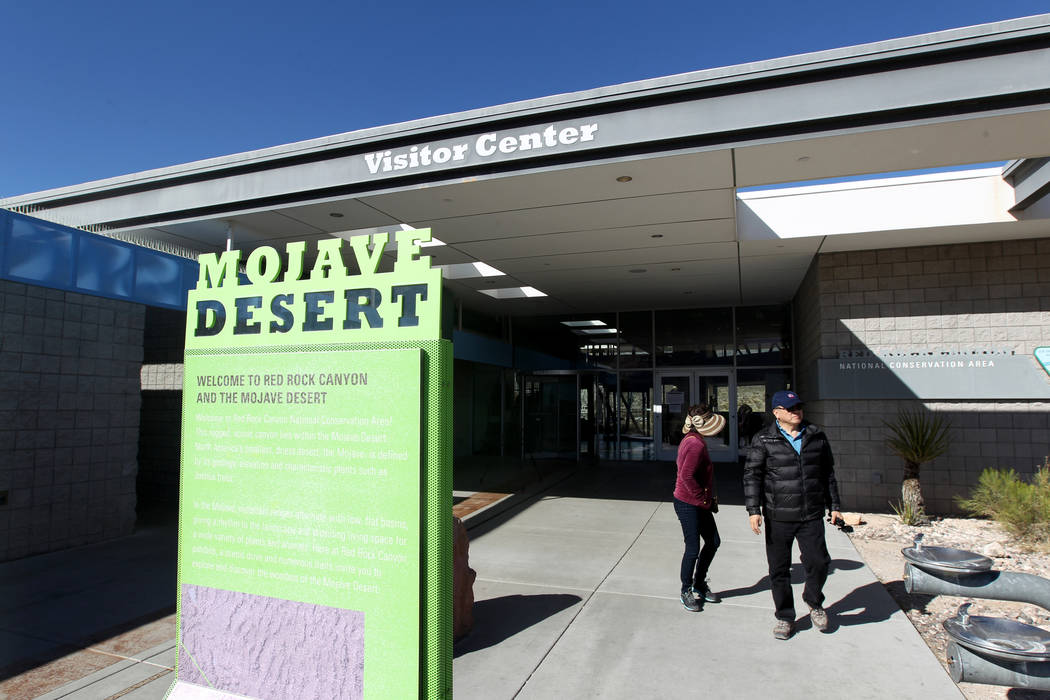 K.M. Cannon/Special to the Pahrump Valley Times The visitor center at Red Rock Canyon National Conservation Area scenic loop was closed Monday, Jan. 22, 2018. While the gates were open, the fee booths, visitor center and bathrooms were closed due to a partial federal government shutdown. 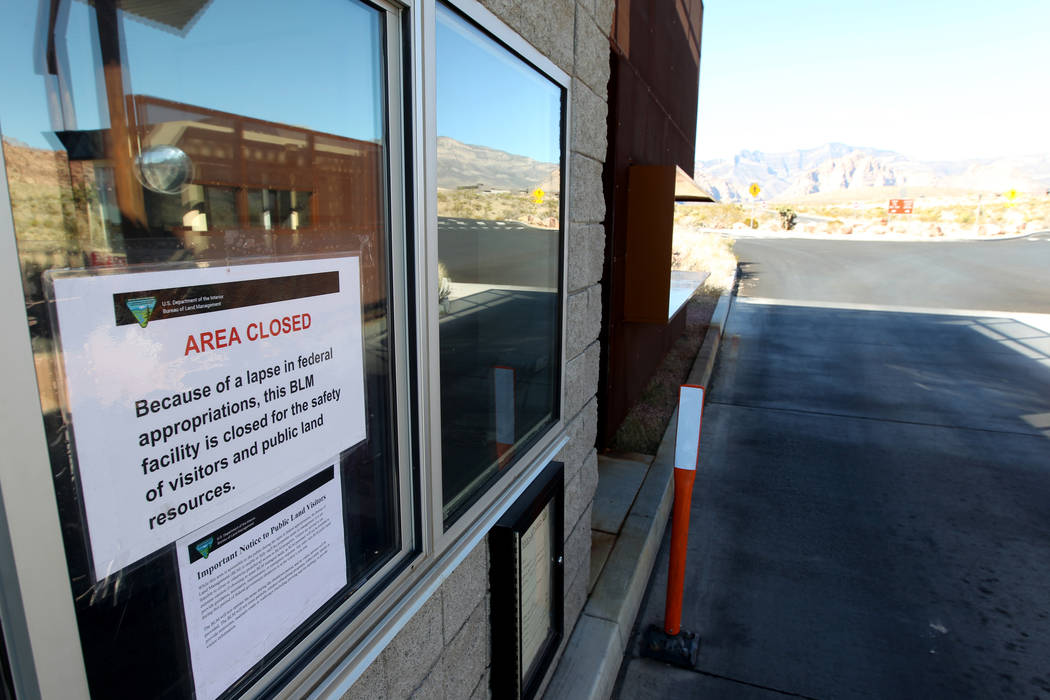 K.M. Cannon/Special to the Pahrump Valley Times A fee booth at Red Rock Canyon National Conservation Area scenic loop was closed Monday, Jan. 22, 2018. While the gates were open, the fee booths, visitor center and bathrooms were closed due to a partial federal government shutdown. 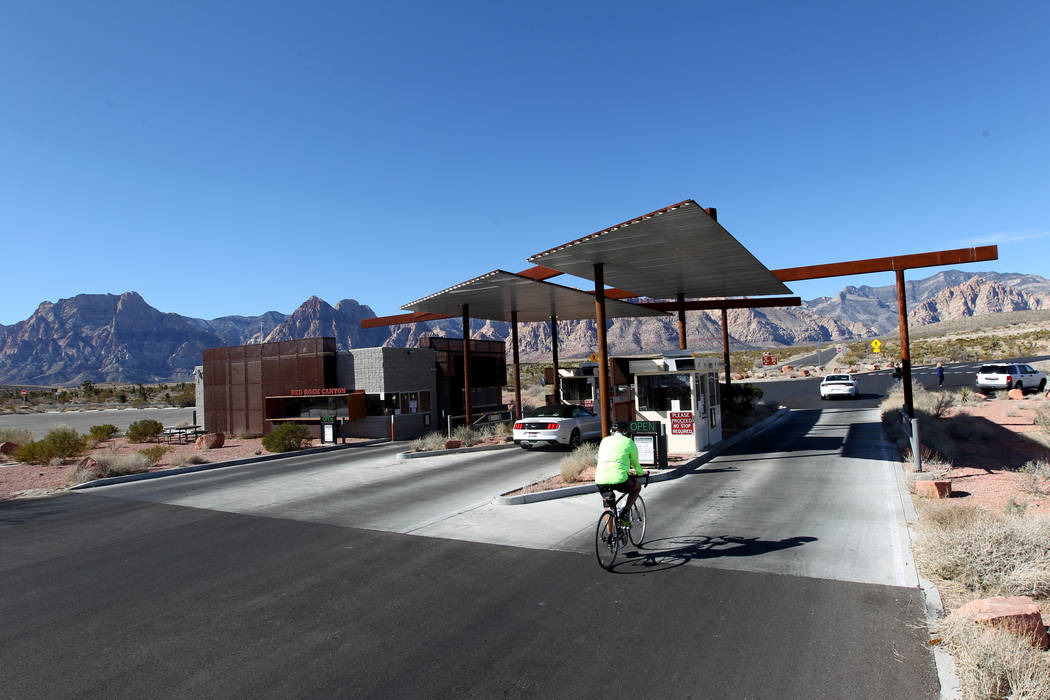 K.M. Cannon/Special to the Pahrump Valley Times The fee booths at Red Rock Canyon National Conservation Area scenic loop were closed Monday, Jan. 22, 2018. While the gates were open, the fee booths, visitor center and bathrooms were closed due to a partial federal government shutdown.

Federal dollars are an important part of many services and jobs across Southern Nevada — especially in national parks and recreation areas, which became apparent as the government shutdown on Saturday initiated waves of partial closures across the state.

The three-day government shutdown that came to a swift end Monday left its presence known through Sunday, as Red Rock Canyon and other destinations such as Death Valley National Park announced there would be limited access to some areas and some services would cease during the shutdown.

The short-term spending bill comes as Senate Majority Leader Mitch McConnell assured Democrats he would allow a vote on immigration reform in February and take up other contentious issues. The government will remain open until Feb. 8 under the terms.

Prior to the budget deal, the scenic loop at Red Rock Canyon National Conservation Area opened on Sunday, though later than its normal time. Officials at Red Rock tweeted an official statement on Sunday from the Bureau of Land Management stating, “Public land across the country will remain as accessible as possible while still following all applicable laws and procedures.”

Emergency and rescue services were to remain limited, with all BLM facilities closing down during a lapse in appropriations.

Sharon Sheppard, senior sales manager at the Oasis at Death Valley, said they were told the visitors center and campgrounds were expected to be closed during the shutdown.

The Spring Mountains National Recreation Area, which includes Mount Charleston, was scheduled to shut down on Monday, barring an agreement, according to the Review-Journal.

The move to keep national parks open, with limited services, came under the direction of the Trump administration, which stated it wanted to “minimize the public pain of a government shutdown,” Bloomberg reported.

Amato had planned to stop in Hawthorne, Gardnerville, Fallon, Winnemucca, Elko and Ely. The tour is canceled until further notice. The “Coffee with Joe” meeting was set for Wednesday in Fallon, the group announced.

The shutdown is short compared to the 16-day impasse that occurred in October 2013, which led to the Red Rock Scenic Drive’s closure during that period.

At that time, “several would-be hikers who tried to enter the area on foot were stopped and ticketed by BLM rangers,” the Review-Journal reported on Jan. 19.

Following the budget negotiations that began in 2013, and the preceding shutdown, several layoffs were reportedly announced by private businesses that do business, according to the Review-Journal.

The list compiled by the park service included parks that lost more than $2 million over the prior three-year average. But other parks, including Death Valley National Park, showed a gain of more than $500,000 in October 2013.

In Pahrump, during this shutdown, there was less of an impact, as it was short term.

“We have not experienced a short-term impact,” said Arlette Ledbetter, tourism director for the town of Pahrump.

Ledbetter pointed to Death Valley National Park remaining open during the short shutdown. If the shutdown had lasted over a long period, there would have been an economic impact, she said.

The shutdown came to a swift end this time, though not without contention.

“While I am pleased that today (Jan. 22) will end four months of congressional Republicans holding nearly 9 million Children’s Health Insurance Program (CHIP) recipients hostage, I cannot support the legislation that passed the Senate earlier this afternoon,” said U.S. Rep. Ruben Kihuen, D-Nevada. “Unfortunately, this deal hinges upon the word of a senator with a long history of breaking his promises and going back on his word.”

The CHIP program was funded for six years under the terms of the deal, but it fell short of a permanent solution for Deferred Action on Childhood Arrivals (DREAMers), Kihuen said.

Kihuen also pointed to several other issues that weren’t dealt with, including not reauthorizing funding for community health centers that serve 90,000 Nevadans and millions across the nation, along with failing to provide disaster relief to Puerto Rico, the U.S. Virgin Islands, Texas and California.

U.S. Sen. Catherine Cortez Masto, D-Nevada, said she was planning to donate her salary to charity in Nevada for each day the government was shut down in a news release on Jan. 20.

“Every member of Congress must come together and work to find a solution to end the Trump shutdown,” she said. “I will not go home and will not take a salary for as long as my constituents are being impacted by President (Donald) Trump’s irresponsible choice to shut down the government.”

“Once again, Washington, D.C. has lost its mind,” Heller said in a statement on Jan. 20. “It’s shameful what Democrats are doing; an engineered government shutdown at the expense of our troops and their families, our veterans, and our nation’s most vulnerable children.”

Shutdown’s effects on military personnel and other benefits

Members of the military forego pay during government shutdowns, though remain working during the period.

A memorandum from Deputy Defense Secretary Patrick Shanahan sent out on Jan. 19 with guidance for a potential shutown stated, “all active-duty service members will continue in a ‘normal duty status,’ regardless of their affiliation with expected and unexpected functions.”

“Military personnel will not be paid until such time as Congress makes appropriated funds available to compensate them for this period of service,” according to the memo. “Civilian employees paid for lapsed appropriations and who are not necessary to carry out or support excepted activities will be furloughed, i.e., placed in a nonwork, nonpay status.”

The gap in pay, however, would not have started unless the shutdown lasted past Feb. 1, the troops’ next payday.

The shutdown doesn’t affect things such as national security operations, benefit payments, medical care, law enforcement, tax collection and many other things such as the U.S. Postal Service, according to the Congressional Budget Research Service.