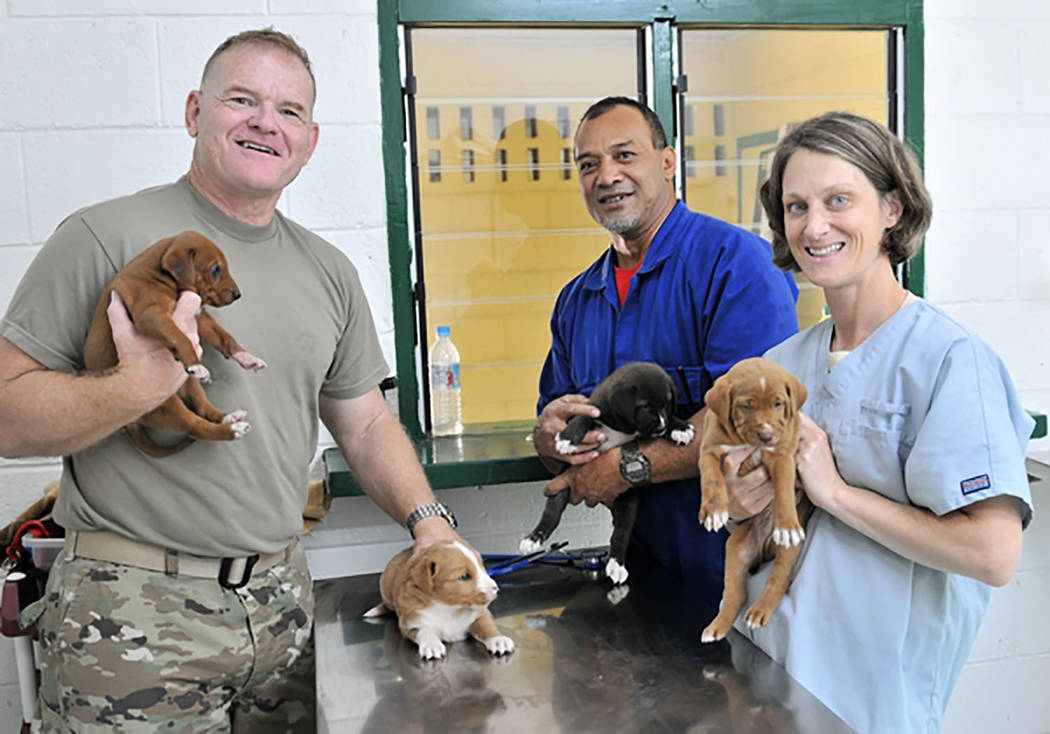 A whole menagerie of animals are familiar members of American households and are often considered full-fledged members of a family, sometimes even acquiring a sappy term of affection such as “fur baby.”

Americans usually strive to provide their domestic pets and livestock with the best available food and veterinary care, including spaying and neutering when necessary.

In some parts of the world, however, resources for animals are in short supply, with few veterinarians, no heartworm medication and no ability to slow population growth.

Tonga is one such place. The remote island-chain country, with its population of 100,000, has only one government-run animal clinic. The one clinic is low on supplies and short-staffed with no full-time veterinarian. It relies on foreign volunteers to bring in expertise, along with desperately-needed medications.

Two active duty Army veterinarians are working to improve animal health care in Tonga. In late July, Army vets in the Public Health Command Pacific teamed up with the Nevada National Guard State Partnership Program to visit Tonga and evaluate the health and care of the domestic animals in the islands.

The State Partnership Program had been working with the Kingdom of Tonga since 2014. During their ongoing engagements to help the country develop better security, disaster relief systems and public health projects, they identified that essential services for the island’s growing animal population were needed.

Program officials reached out to Pacific Command, who assigned two Army veterinarians to join the State Partnership Program and evaluate the needs and shortfalls of the kingdom.

Maj. Kimberly Yore is an Army vet from Joint Base Lewis-McChord in Washington state. She was the first to arrive and with the help of the State Partnership Program’s government contacts, was able to get to work right away.

“Everywhere in Tonga, one sees horses, cows, pigs, chickens, ducks, goats and sheep. Although the animals appear to run free, they are all owned by a family who relies on them,” said Yore. “Animals running freely leaves lots of potential for disease and injury such as parasites, the spread of infection and trauma. Some diseases can spread between people and animals.”

Lt. Col. Howard Gobble, the director of veterinary services for Public Health Command Pacific, joined Yore for a portion of her two-week mission. He had previously visited Tonga a few weeks earlier to assess the veterinary needs of the country.

Gobble said the vets had three goals while in Tonga: evaluate the human/animal health status of the country, disease surveillance, and the restoration of the King of Tonga’s Royal Guard’s horse detachment to a functional level.

“Veterinarians play a vital role in animal health, which in turn affects human and environmental health,” Yore said. “The Nevada Guard saw the huge role that animals play in the lives of the Tongan people and Tonga’s lack of veterinary services. I was invited to assess how veterinarians could help fill the gap in veterinary care and public health in Tonga as part of future SPP engagements.”

“I met with local animal health aides and leaders in the Ministry of Agriculture, Food and Fisheries to determine areas where the State Partnership Program can partner with Tongan agencies to improve veterinary care and public health,” Yore said.

The team first had to evaluate the current system that was in place to determine what kind of care was needed for the animals of Tonga.

They visited Ana Pifeleti, the Tongan Ministry of Agriculture, Food and Fisheries official who is the head of livestock management. She supervises the only animal clinic in the kingdom; it has a staff of 14 government employees.

She said the clinic treats domestic house pets as well as large animals and livestock like cows, horses, pigs, chickens, and ducks.

“We have 18 South Pacific Animal Welfare teams, a group of volunteers who visit here on a quarterly basis,” she said. “They provide a number of free services for domestic animals and bring supplies.”

“The Tongan people seek help from the clinic for their sick animals in exchange for donations of money or handicrafts,” Yore said. “There is no veterinarian in Tonga, so the veterinary nurses who work at the clinic have to do the best that they can, working with limited training, supplies, medicines and equipment.”

Pifeleti said the government provides animal medical services for free to Tongan citizens, but, with much of the population on far-flung islands, many Tongans are unable to acquire adequate care for their animals.

“It was a very challenging process. We did meet a very competent veterinary tech working at the clinic,” Gobble said. “We worked with him all week and gave him some training. We also took samples from local animals to check them for diseases.”

While the Army vets were at the clinic, a local man arrived with four small puppies. The team of vets and the veterinary technician stopped inventorying supplies to tend to the puppies. They examined the scared canines, administered medication and gave the thankful man advice on how to look after his pups and when to come back for a checkup.

“You can’t disclose the fact you are a veterinarian in a land so desperate for veterinarians and then not treat anything, so I did that, too,” Yore said. “I mostly treated dogs and cats for internal and external parasites and made recommendations to their owners to improve the health of their animals.”

All the king’s horses

The team was also tasked to improve the health of the Tongan Royal Guard’s horses. The detachment cared for about six horses on the grounds of the king’s royal palace.

“The previous king had a small cavalry unit and one stallion imported from Australia,” Yore said.

She said that stallion started breeding and since there was no one on the island trained to handle, catch or castrate them, the herd was quickly turning into a feral population. Castration is a standard procedure for male horses in the United States.

The vets reported the condition of the pastures to the Ministry of Agriculture, Food and Fisheries including recommendations in caring for the horses in the future. After, they were able to catch one stallion for castration.

“Unfortunately, they only let us castrate one,” Yore said. “However, I think the success of this one procedure and the other recommendations we made elevated the Royal Guard’s concern for the equine situation and they will likely be open to further procedures when veterinarians return.”

She said they trained the vet tech how to do the procedure and left him with the equipment and medication he needed in hopes that the Royal Guard will call for his assistance.

“If the people of Tonga see the king taking steps to care for his horses and pasture, perhaps they will realize the importance of proper care for the other animals in Tonga.”

“It’s a baby step, but it’s a step in the right direction,” Gobble said.

What the future holds

The State Partnership Program regularly returns to Tonga, each time bringing a small team of subject matter experts to engage with the Tongan Defense Force and government leadership.

Each time, they revisit the issues addressed in the past to ensure they are moving forward, create partnered solutions for topics they identified in previous visits and investigate to find areas where the program can help in the future.

Each program director is in constant communication with its respective country’s ministers and senior military officers.

The State Partnership Program allows teams to have access for engagements and the ability to follow up to make sure progress continues.

“The SPP is not looking to come in and just perform veterinary care for Tonga. There is too much need even to scratch the surface,” Yore said.

“The SPP (State Partnership Program) is in the business of building capabilities within Tongan society. That starts with Tongan citizens having the desire to improve their situation and seeing that improvement is indeed possible.”

Sgt. Walter Lowell is with the 106th Public Affairs Detachment of the Nevada National Guard.