The Nevada Realtors association is one of more than a dozen organizations around the state working to battle against a growing opioid epidemic in Nevada and across the U.S.

The Nevada Realtors association, at its annual state conference at the M Resort Spa Casino in Las Vegas at the end of September, spoke about its involvement in the Rx Abuse Leadership Initiative of Nevada (RALI), where Realtors are working with homeowners to dispose of unused medication.

Keith Lynam, president of the Nevada Realtors association, spoke about the statewide organization’s involvement in the initiative and shared a personal story of how he has crossed paths with the issue many Realtors are facing firsthand.

Lynam said the Nevada Realtors organization was approached by RALI about getting involved in the opioid crisis.

“And it just so happened that a week before that, I was at an open house,” Lynam said. “Long story short, two people came in individually. One of them went upstairs, the other one tried to distract me to go downstairs. I went up the stairs and found her in the medicine cabinet with pills going into her purse.”

Lynam said, “We’re usually worried about the personal fixtures: Have you got any guns, weapons, valuables, hiding those, but none of us have really thought about the prescription drugs.”

According to a 2015 national survey on drug use and health, 59.9 percent of adults who reported misusing opioids didn’t have a prescription and 40.8 percent obtained prescription opioids from friends or family at no cost for their most recent use at the time of the survey.

The Nevada Realtors association teamed up with RALI’s initiative in 2018.

Nevada Realtors has since assisted with RALI’s effort in Nevada to distribute some 50,000 “Deterra” or drug deactivation systems. The system, which is just a small plastic pouch, allows homeowners put their old medications inside and add water. After that, the pouch can be disposed of.

According to Lynam, many overdoses occur by people who are not patients.

“When we got involved with RALI, here’s what’s really important, too, 50% of the overdoses in the country are from people that aren’t patients,” he said. “They realize that this is an easier high, and they just want to steal prescription drugs. They’ve never been prescribed.”

The deactivation systems are being brought to homeowners by Realtors.

“One of the things that one of our speakers just said is they’re going to start including it in the listing package and say hey, you’ve got those expired prescription drugs, here’s a safe, easy way to dispose of them,” Lynam said at the association’s annual conference. “… We are going to get it to the community, however, we can get it to the best served, to get it out there … for those expired drugs: Don’t flush them, don’t throw them away, put them in the bag.”

RALI also debuted its RALI Cares vehicle at the state conference. The trailer on display at the conference contained a replica of a teenager’s bedroom with displays of typical items that teens might use to hide illegal or controlled substances. The trailer was on display for educational purposes for parents and others.

The nonprofit Community Anti-Drug Coalitions of America (CADCA), an organization that works to prevent substance misuse before it starts on a global level, is supporting RALI’s efforts in Nevada and in other parts of the U.S.

The coalition has supported RALI’s efforts since that organization launched in April 2018, according to retired U.S. Army Gen. Arthur T. Dean, chairman and CEO of the Community Anti-Drug Coalitions of America (CADCA).

Quoting the FDA, Dean said “On average, a prescription that is written in America, only 50% of it is used. So, where are those other medicines that are not used?”

Dean answered that many of these prescriptions are inside medicine cabinets of homes.

“What we’ve been doing with RALI is making people aware of that,” Dean said to a room full of dozens of Realtors at the M Resort in Las Vegas.

“RALI has brought together not just the prevention community CADCA, but also consumers, veterans, employers, first responders, hospitals, medical professionals and pharmaceutical companies, all working together to advance programs that would help prevent the misuse of opioids and ultimately help save lives, and that’s really what it’s all about,” Dean said.

According to Dean, RALI has pushed into 14 states and more are to come.

On stage, Dean explained that the Community Anti-Drug Coalitions of America came out of presidential action in the late ’80s, where a drug advisory council was created in reaction to the then-growing cocaine epidemic.

The council met for three years, according to Dean, with the end result being the creation of the Anti-Drug Coalition in 1992.

The coalition works to increase the “capacity of community coalitions to create and maintain safe, healthy and drug-free communities globally,” the organization’s website states.

The coalition supports local organizations by providing things such as technical assistance and training, public policy advocacy, marketing programs and other offerings to local coalitions.

“There were a few hundred of these multi-sector community coalitions at that time,” Dean said. “We now have over 5,000 of them.”

The number of people who died due to opioids in Nevada in 2017 was 412, according to data from the National Institute on Drug Abuse. That number was up from 2016, but down slightly from 2015, according to information in a bar graph on drugabuse.gov

Nationwide, 47,600 deaths involving any opioid overdose occurred in 2017, according to data from NIDA.

Deaths related to opioids have risen over the last several years on the national level. Just over 8,000 people died in the U.S. due to overdoses involving opioids in 1999 with a steady increase in the number of deaths rising over the next several years, according to data from NIDA.

According to RALI’s website, ralinv.org, individuals can also destroy old medication by mixing medicines with kitty litter or old coffee grounds in an airtight container and disposing of them.

The kiosks allow for the return of controlled and non-controlled medications, vitamins and other things, though it doesn’t allow for any illegal drugs to be dropped off.

For dropping off sharps, such as needles and things of that nature, those items should be in a sharps container and brought to the sheriff’s office location, not any other kiosk around town.

For more information on the kiosks, contact the evidence department of the sheriff’s office at 775-751-7038.

For more information on RALI, go to ralinv.org

4
Pahrump-area motorists advised to watch out for wild horses

The 2020 Census is just around the corner and the U.S. Census Bureau is gearing up for the enormous decennial undertaking.

Applications are being accepted by the U.S. Department of Agriculture Rural Development for grants that support businesses and jobs in rural Nevada. The Rural Business Development Grant has several uses to rural areas: technical assistance, training and other activities.

Business and other leaders around Pahrump gathered for the Pahrump Valley Chamber of Commerce’s 2020 Installation and Awards Gala in mid-January.

Pahrump Podiatry moved to a new location in the fall of 2019, giving the group more than three times the space it was previously in.

About 170 people gathered in Beatty Jan. 10-12 for the Nevada Veterans of Foreign Wars mid-winter conference. 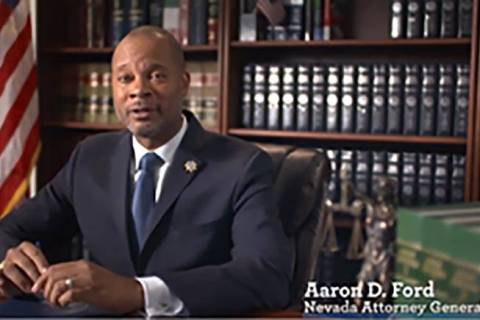 Nevada Attorney General Aaron D. Ford reached an agreement, alongside 22 state law enforcement partners, with PayPal Charitable Giving Fund Inc., the charitable arm of PayPal Inc. The agreement will help ensure donors who use the fund are given adequate information and disclosures when making a donation through PayPal’s online fundraising program, according to information in a press release from Ford’s office.

For more than a decade and a half, the town of Pahrump has been working toward development of a huge patch of land with the ultimate goal of turning 427 acres of property into a major recreation facility, the Pahrump Fairgrounds.

Many Pahrump area property owners have been angry these past few weeks about a future hike in the per parcel fee assessed on their property taxes. And owners haven’t been shy about expressing their frustrations either.