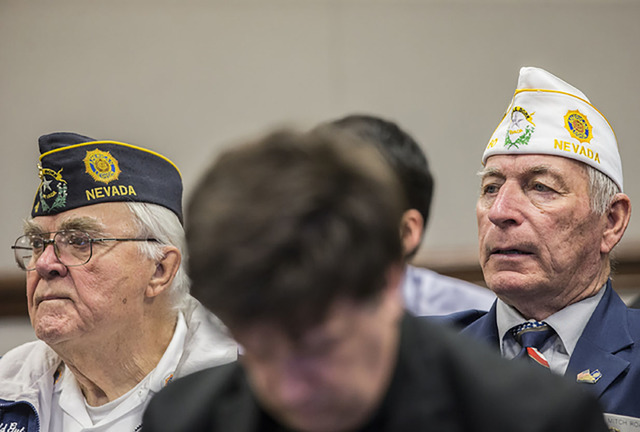 Navy veteran Mitch Roach, right, listens to testimony during a Senate Government Affairs Committee meeting on the third day of the Nevada Legislative session on Feb. 8 in Carson City. Benjamin Hager/Special to the Pahrump Valley Times

Both measures were approved by the Senate Committee on Government Affairs and now move to the full Senate for consideration.

Senate Bill 58, among other things, broadens the commission to 11 members from nine. The governor appoints three members who are representatives of veteran organizations and two members of the public.

Nevada’s governor would appoint two more members, one being a member of the Women Veterans Advisory Committee and one who is pursuing a bachelor’s or higher degree and who was honorably discharged from the military.

The Senate majority leader and speaker of the Assembly appoint one member each, as do the chairs of the Northern and Southern Nevada veteran cemetery advisory committees.

Backers of the bill said it would give women and younger veterans more recognition and status to help shape policies affecting their peers.

Senate Bill 70 sets a process to deal with medals, tiny American flags, photos and other artifacts left at veteran memorials.

Kat Miller, director of the Nevada Department of Veterans Services, said the issue came to light after the state dedicated a memorial in Southern Nevada on Veterans Day last year. Since then, nearly 100 items have been left at the site. Likewise, items are sometimes left at the USS Nevada memorial behind the state Capitol in Carson City. One was an eagle statue with two American flags.

Under the bill, the Department of Veterans Service will work with the Division of Museums and Nevada Historical Society to determine if any of the items have military or historical value, and if so, transfer them to appropriate institutions or nonprofits like veterans’ organizations.

It allows for other less significant items to be destroyed.

The committee was told no items would be destroyed or retired without first being vetted by museum experts and veteran groups.

A bill that would allow 18- to 20-year-olds with military backgrounds or affiliations to carry concealed weapons was introduced Thursday in the state Assembly.

The genesis of the measure is a discussion the lawmaker said he had with a constituent in 2014 who was a military police officer with the Nevada National Guard who was too young to obtain a permit. Daly’s bill also would pertain to people in or have been honorably discharged from the military.

Daly put the bill in ahead of the 2015 session but he did not win re-election. He won his District 31 seat back in 2016 and so requested the bill for this session.

“I believe it is still a valid point and that is why we introduced the bill,” Daly said.

“The military has already given them a gun. A lot of them — it is part of their job. The guy was military police and so he was carrying a gun every day but couldn’t get a concealed carry permit in Nevada and I thought that was unfair to that person.” – Sean Whaley, Las Vegas Review-Journal

In his first bill since becoming a member of Congress, Nevada Rep. Ruben Kihuen on Thursday introduced legislation that would align Labor Department grants for community colleges with local veteran labor markets.

Kihuen, D-Las Vegas, said his bill, the Service Training Education and Preparation for Veterans Act, ensures “community colleges have the tools they need to best serve those who risked their lives for our country, and fill much needed jobs.”

The bill calls for grants for community colleges to assess employment openings to match the skills and training of veterans. Additionally, it establishes an advisory board of business community representatives and Veterans Affairs staffers to help veterans find jobs.

“As our service members transition out of the military, they are looking for good-paying jobs,” Kihuen said in a statement. “Across the country small businesses, startup companies and local employers are seeking a talented workforce capable of meeting the demands of today’s economy.” – Keith Rogers, Las Vegas Review-Journal