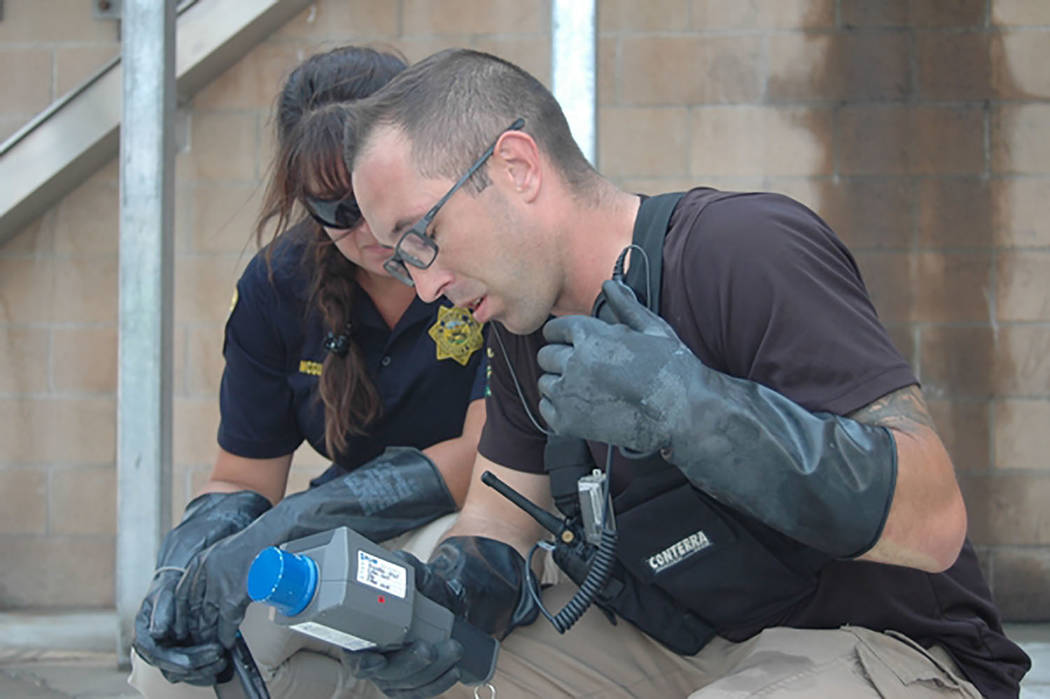 In stark contrast to highly-visible decimated infrastructure and horrific casualties, a radiological threat in the aftermath of a natural or man-made catastrophe is far more subtle.

But exposure to the unseen hazard can be just as deadly as any explosion or dispersed chemical, evidenced by the death of tens of thousands of Japanese due to radiation following the atomic bomb blasts in World War II.

Invisible and undetectable by human senses, radiation – the emission of energy in the form of waves or particles through space or a material medium – can only be detected by specialized equipment and operators.

In order to ensure first responders and law enforcement agencies remain efficient in the field of radiation detection and identification, the Nevada National Guard’s 92nd Civil Support Team was one of the lead agencies that hosted the Beta Burn Exercise July 31-Aug. 4 at sites in Reno and Carson City. All told, a dozen federal and state agencies participated in the exercise.

The 92nd Civil Support Team includes 22 soldiers and airmen headquartered in Carson City who remain ready to assist Nevada first responders in the wake of any natural or man-made disaster.

During the exercise, the agencies responded to a mock scenario in which the FBI asked for assistance in locating, identifying and mitigating a possible radiological dispersal device lab in northern Nevada. An RDD, commonly referred to as a dirty bomb, is a weapon that combines radioactive material with conventional explosives.

On Aug. 3, the scenario at Reno’s Regional Public Safety Training Center called for a search and identification of a potential radiological source after mock bomb makers were detained by law enforcement.

Although the entire situation was simulated, the radiation source was not. Frederick and his search partner, university police officer Jaimie McGuire, had to keep a close eye on the amount of radiation they were receiving as they searched for mock bomb makers’ leftover radiation material.

“You really don’t know if it’s there until your equipment goes off – and then you need to know how to react,” said Frederick, 31, of Carson City.

After locating and marking the radiation source in the building, the Reno Fire Department checked Frederick and McGuire for lingering radiation contamination and the duo was cleared for other missions.

On Aug. 4, the exercise culminated with seven live detonations of explosives at the Washoe County Regional Shooting Facility. Explosive and radiological experts used the detonations to demonstrate how radiological liquid and powder contaminants are dispersed by dirty bombs.

The radiological liquid and powder hazards were simulated with fluorescent liquids and non-toxic powders. After each explosion, CST personnel walked to the detonation site and surveyed the mock contaminants using black lights.

A final review of the exercise by all participants is set for Aug. 18, but Fansler said he believes the exercise met its pre-established goals.

“Beta Burn served to train 120 first responders from 12 agencies in basic radiation response and safety, radiation equipment familiarization, and the detection and identification of radiological sources,” Fansler said. “The training everyone received during the exercise assists the entire group of first-response agencies in developing and strengthening standard operation procedures as well as identifying any gaps in our cooperative response to radiological incidents.”

The next major event for the civil support team is a similar catastrophe response exercise set for October in California.