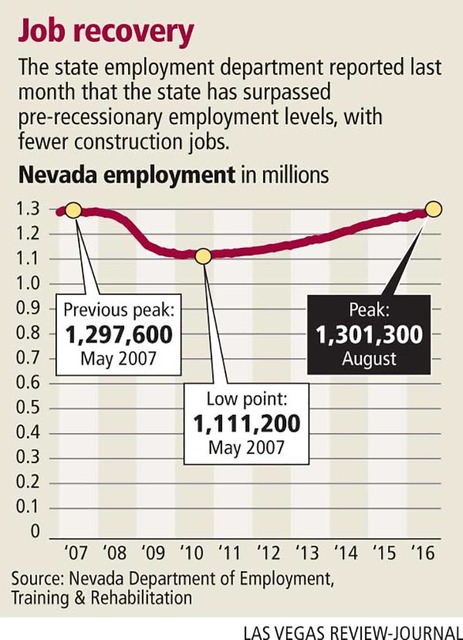 At 1,301,300 jobs, employment in Nevada has now surpassed pre-recession levels — with about 70,000 fewer construction jobs — according to the Nevada Department of Employment, Training and Rehabilitation.

Bill Anderson, chief economist for the employment department, said that while historical drivers such as hospitality and construction industries have made solid contributions, job growth in other industries has been impressive.

Since the economic downturn, Nevada has added 190,100 jobs, including 36,600 in the trade, transportation and utilities sector and 34,100 in the professional and business services sector.

The health care sector has added 25,000 jobs, and that increase is among others.

Anderson said the gains in health care were driven mostly by population.

“As our population grows, there’s going to be increased demand for health-care-type services,” said Anderson.

The job growth achievement had been expected following 68 months of consecutive growth, according to the employment department.

Yet Nevada still ranks in the top five states in unemployment.

In August, the national seasonally adjusted unemployment rate was 4.9 percent, compared with 6.3 percent in Nevada, according to the U.S. Bureau of Labor Statistics. Unemployment in Nye County was 7.5 percent in August in a labor force of 15,769.

One of the hardest-hit states amid the recession, Nevada lost 186,400 jobs, hitting a low of 1.1 million in September 2010. The two industries most affected were construction, which lost 80,000 jobs, and leisure and hospitality, which lost 30,000 jobs.

In a speech last month at the Governor’s Conference on Business, Nevada Gov. Brian Sandoval pointed to electric car producer Faraday Future, data company Switch and battery manufacturer Tesla as examples of the state’s diversification, but he cautioned that obstacles remained.

“We have to make sure that we have that workforce that’s going to match these new industries that are coming into our state,” said Sandoval.