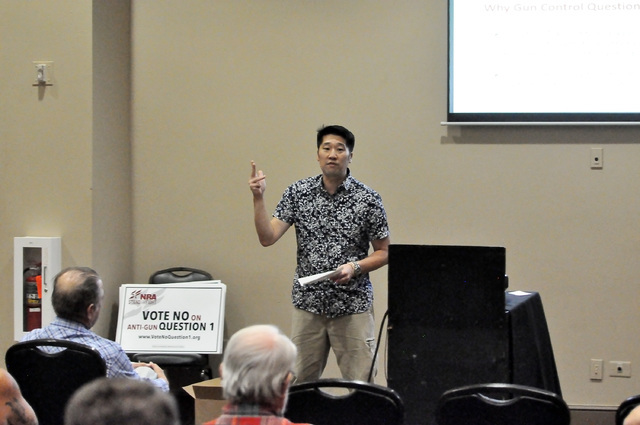 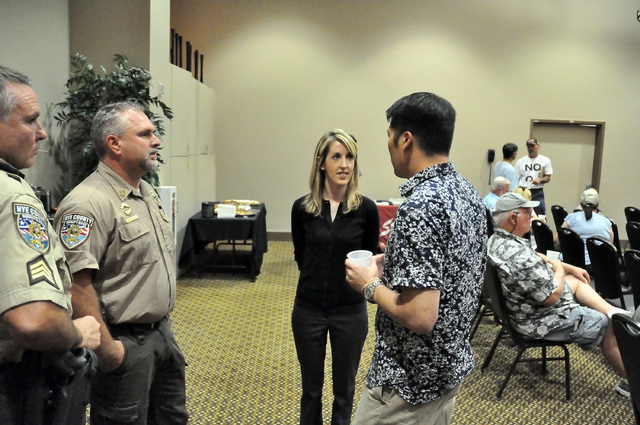 Members of the grassroots movement Nevadans for Freedom that aims to defeat Question 1 on the November ballot have asked Nye County voters for support.

The members of the National Rifle Association-sponsored group hope to drum up enough support ahead of Nov. 8 to fight off the proposal that would require a background check for private gun sales in Nevada.

Kevin Kam, Las Vegas campaign field representative for Nevadans for Freedom, said the organization wants to reach out to all registered voters and not just NRA members and gun owners.

“In order for us to win, we need more than just gun owners and NRA members to vote no on this,” Kam told the group that gathered at the Pahrump Nugget on Thursday night.

The group needs help with canvassing and phone banking.

“Those are the two most important things, phone calls and door knocking. We really need help doing that,” Kam said.

Keely Hopkins, Nevada grassroots field coordinator at Nevadans for Freedom, said the campaign has been active throughout the state.

“The more you know about question one, the more likely you are to vote against it. We just have to make sure that everyone’s aware of this initiative and they know that it’s not just background checks for private sales. This criminalizes a lot of hunting activities, law-abiding gun uses,” Hopkins said.

The proposal was qualified through the initiative process. During the 2015 session, the Legislature did not enact the measure.

While the proponents of the initiative say that it will make it harder for criminals to obtain guns, the opponents argue that it will criminalize private gun transfers and will not stop criminals from getting guns.

“The Question 1 gun control ballot initiative will criminalize virtually every private firearms transfer in Nevada. Under this measure, many commonplace activities of law-abiding gun owners would be subject to government mandates and fees that would cost Nevadans time, money, and freedom,” said Catherine Mortensen, media liaison for NRA’s Institute for Legislative Action.

Question 1 is not about making Nevadans any “safer,” it is part of a broader national gun control agenda that’s being pushed by billionaire and former New York Mayor Michael Bloomberg, Mortensen said.

“We support Question 1 because while no one law can prevent every crime, we know that closing the loophole will help reduce gun violence and save lives,” Crowe said. “In the states with similar laws, there are 48 percent fewer police officers killed with guns and 46 percent fewer women shot and killed by their intimate partners.”

“No one law can prevent every crime, but background checks made it harder for criminals to get guns and that will save lives,” Crowe said. “It’s just that simple.”