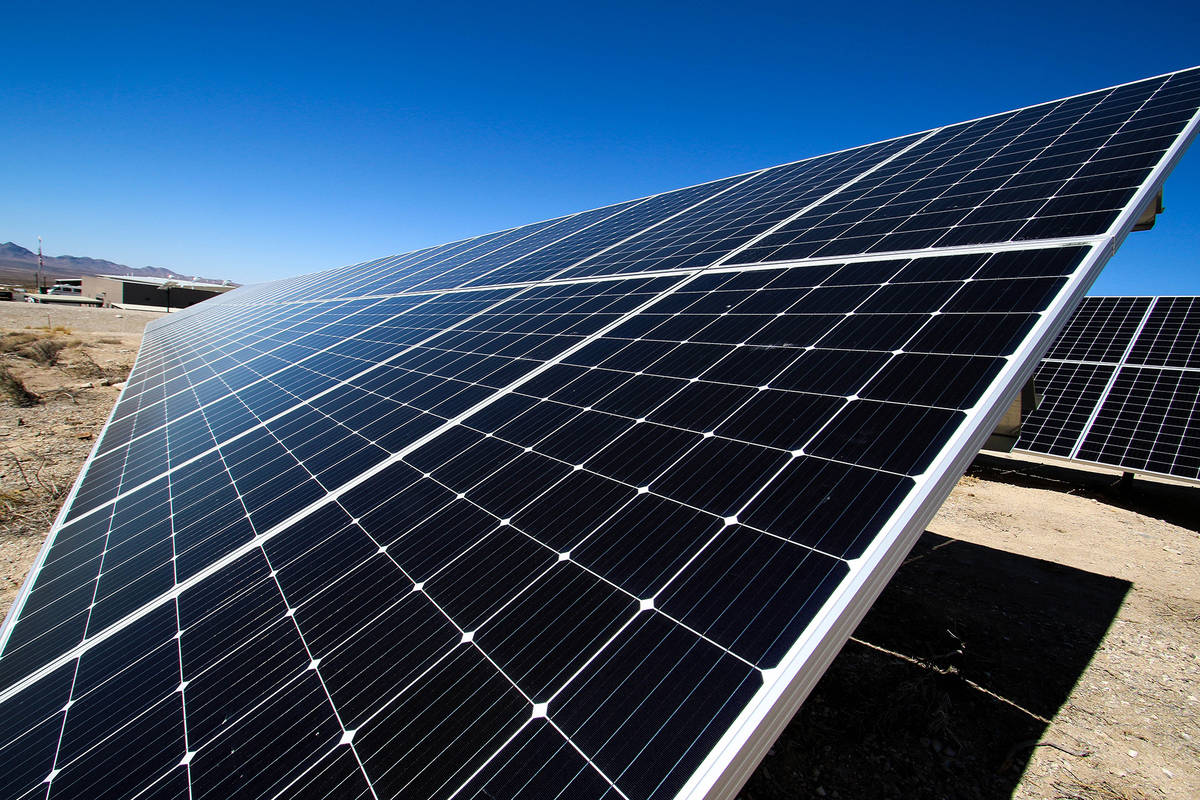 Special to the Pahrump Valley Times Nevada Statewide Ballot Question 6 focuses on increasing the amount of renewable energy, such as solar, wind or geothermal, sold by electric providers in the state through an amendment to the Nevada State Constitution.

Part one, centered on the proposal to remove the Nevada State Board of Regents from the Nevada Constitution, was presented in the Sept. 18 edition of the Pahrump Valley Times.

Part two, published Wednesday, Sept. 23, focused on the proposal to amend the state constitution’s definition of marriage to include same-sex marriage.

Part three was presented on Sept. 30 and covered the proposed constitutional amendments regarding the Nevada State Board of Pardons. Parts four and five are both included in this edition. All can be viewed online at pvtimes.com

Nevada Statewide Ballot Question 6 takes aim at increasing the use of renewable energy by proposing to amend the Nevada Constitution to require local power providers to either generate or purchase incrementally more renewable energy over the next decade.

Question 6 would provide for the expansion of an existing Nevada Revised Statute that also includes a renewable energy requirement, enshrining a mandate into the state constitution that the Nevada Legislature provide by law for the provisions necessary to implement the requirements as described by the ballot question.

There is plenty of controversy surrounding Question 6, which is the only statewide ballot measure to include arguments for passage and against passage as well as rebuttals to each. The documents provided on the ballot question by the Nevada Secretary of State’s Office encompasses eight full pages of information and come complete with citations of various resources used to back up the claims made by both sides of the argument.

“Nevada is one of the sunniest states, yet we get only 20% of our power from clean, renewable sources like solar,” the argument for passage asserts. “Instead, we spend $700 million a year to import dirty fossil fuels from other states. Question 6 would change that.”

The argument in favor goes on to claim that Question 6 would “ensure cleaner air and healthier families” while also boosting the economy by leading to financial investments in the state and thousands of new jobs. In addition, the argument for passage says the measure would result in savings for Nevadans, contending that renewable energy is cheaper than “dirty energy” and citing a declining cost of energy storage.

The argument opposing Question 6, on the other hand, pronounces the measure as “unnecessary and risky.”

“Nevada’s current Renewable Portfolio Standard is already set to increase to 25% by 2025,” the argument against passage reads. “This steady approach was carefully studied and executed by Nevada lawmakers and approved by the governor to invest in Nevada’s future to become the world’s leader in renewable energy while at the same time protecting Nevadans against out-of-control rate hikes.”

The argument against also takes exception to the assertion that renewable energy is cheaper than other energy sources. “If renewable energy was already at a stage of superiority capable of competing on price, it wouldn’t demand a constitutional mandate,” the document states, concluding, “Mandates are unbending and unforgiving. The passage of Question 6 threatens to repress future innovation and wound our efficiency.”

To review the digest as well as the full arguments in favor and against each ballot question visit www.nvsos.gov and click on the “Elections” link, followed by the “2020 Petitions” link.

Author’s note: There is no Question 5 on the 2020 general election ballot in Nevada.