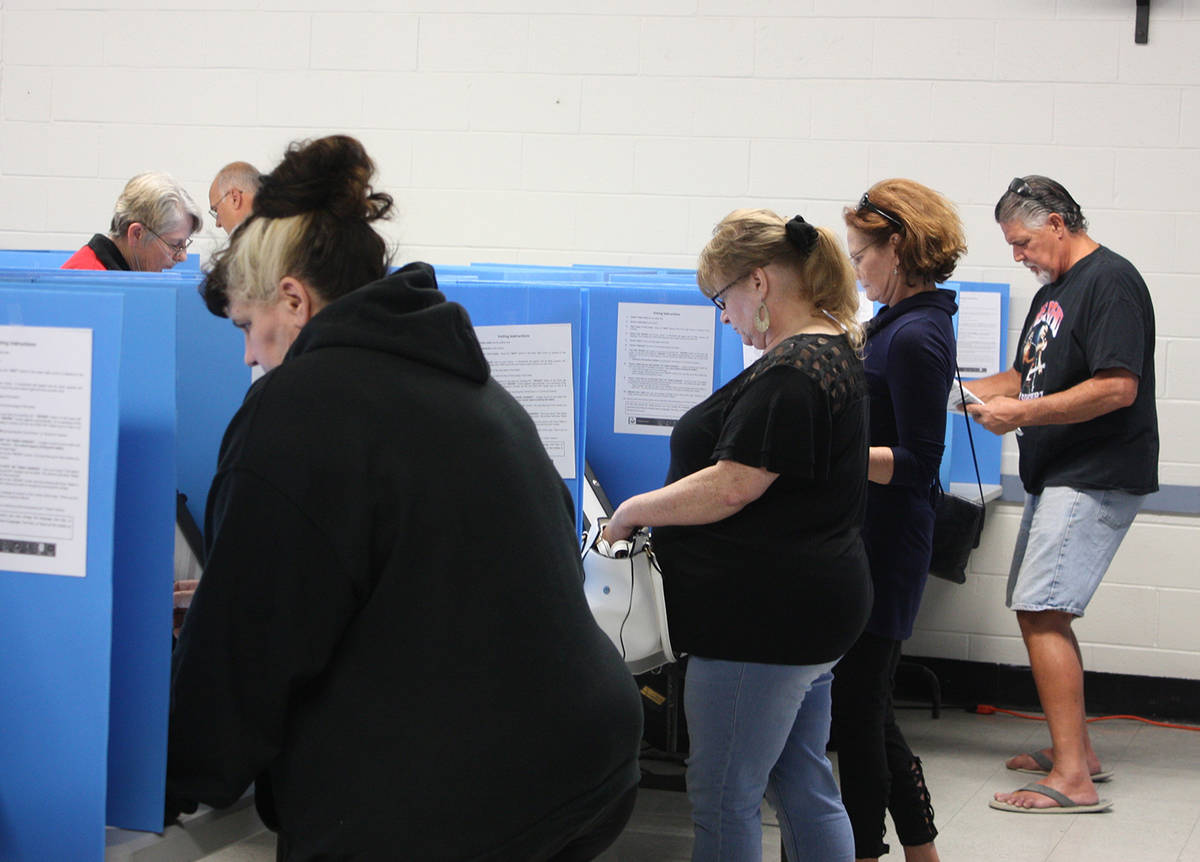 Robin Hebrock/Pahrump Valley Times The rights of voters in Nevada are outlined in Nevada Revised Statute but if statewide ballot Question 4 passes, those rights will then be enshrined in the state constitution.

Part one, centered on the proposal to remove the Nevada State Board of Regents from the Nevada Constitution, was presented in the Sept. 18 edition of the Pahrump Valley Times.

Part two, published Wednesday, Sept. 23, focused on the proposal to amend the state constitution’s definition of marriage to include same-sex marriage.

Part three was presented on Sept. 30 and covered the proposed constitutional amendments regarding the Nevada State Board of Pardons. All can be viewed online at pvtimes.com

Nevada Revised Statute 293, which governs elections in the Silver State, contains a Voters’ Bill of Rights that enumerates the rights of qualified and registered voters of the state. The aim of Nevada Statewide Ballot Question 4 is to have a similar enumeration of such rights enshrined in the Nevada Constitution.

“The right to vote in free and fair elections, knowing that each vote counts, is one of the most important guarantees in protecting our democracy,” the argument for passage details. “Our election system faces many potential challenges, such as unforeseen technological glitches and the threat of bad actors attempting to alter election outcomes. This ballot measure would provide simple, yet crucial, constitutional guarantees to protect both voters and the integrity of our elections.”

The argument in favor of Question 4 adds that providing a constitutional guarantee of voter rights that are already in existence as statutes would make it much harder to interfere with or diminish those rights in the future. The assertion is that, as Nevada revised statutes can be changed by the state Legislature, those laws are subject to the tides of political change. The Nevada Constitution, however, cannot be altered without a vote of the people and therefore, voters’ rights would be more difficult to alter or impede if they were recorded in the state constitution, the argument for passage asserts.

On the other side of the argument, it’s a matter of the thought process behind the phrase, “If it ain’t broke, don’t fix it.”

“There is a reason that the voting rights listed in Question 4 exist in statute and have not been added to the Nevada Constitution,” the argument against passage states. “These voting rights, while vitally important, are not timeless in their structure or application, and the forms they take may change substantially as the ways in which we vote and conduct elections evolve. Future advances in technology will likely make several of the voting matters addressed by Question 4, such as written ballots, polling places and even in-person voting, obsolete.”

The specificity of the voters right proposed to be added to the state constitution appears to be the main point of contention, with the argument against passage stating, “Because these voting rights are already guaranteed elsewhere, there is no need to burden the Nevada Constitution with references to specific practices and systems that will surely change over time…”

To review the digest as well as the full arguments in favor and against each ballot question Nevada voters will decide this November visit www.nvsos.gov and click on the “Elections” link, followed by the “2020 Petitions” link.