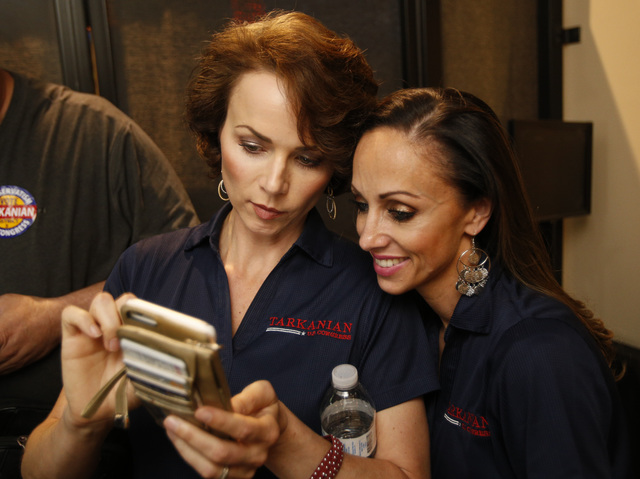 Richard Brian/Las Vegas Review-Journal Amy Tarkanian, left, is shown in a 2016 photo with a friend, Jamie Brashaw, in Las Vegas. Tarkanian is a strong supporter of President Donald Trump and revels in her position as a Fox contributor, writes journalist Ray Hagar of Nevada Newsmakers.

Amy Tarkanian, the former chairwoman of the Nevada Republican Party and a current contributor to Fox News and Fox Business, said this week that she has “noticed a change in tone” in some of the Fox programming.

“I didn’t have any relationship with those folks but I have noticed a change in tone with some of the programming, which has been interesting,” Tarkanian said recently on Nevada Newsmakers.

She also likes her airtime on Fox.

“I have been enjoying every minute of it,” she said. “When I was chair, I was able to go on multiple times with people like Charles Payne, Stuart Varney and Lou Dobbs and now they have me on — oh my gosh — one to three times a week. So I am really enjoying this relationship I have with Fox and Fox Business.”

Tarkanian also said she found it difficult to watch MSNBC, even though the liberal-leaning news station recently ranked number one in both total viewers and the key adults 25-54 demographic during prime time for a full week, according to Nielsen data.

“I can’t understand why,” she said. “I know it is good to listen to other opinions and watch other people’s ideas and hear them out. But I have a tough time watching them on a regular basis.”

Tarkanian is a strong supporter of President Donald Trump and revels in her position as a Fox contributor.

“I’m enjoying my position of being the voice who does support the POTUS,” she said. “The media does not want to favor that side so I like being that one sore thumb, I guess you could call me.”

Tarkanian was not surprised, however, when Trump called major players in the American mainstream media — CNN, The New York Times and NBC News, “the enemy of the people” in a tweet.

“No, that didn’t surprise me,” Tarkanian said. “He is very vocal. He’s very blatant. He’s bold in most of his statements and he is not polished. So that doesn’t surprise me at all.”

On Trump’s tweets, Tarkanian said, “I know some people like his tweeting. Some people are not big fans.”

“I’m torn,” she added. “Those who do like his tweets, they like the fact that he can go over the media and let’s face it, the Washington media was never going to be his friend. It just didn’t matter if he played nice with them or not. He could say the sky is blue and they’d say, ‘Oh my gosh, did you hear that idiot? The sky is cornflower blue. It is not regular blue. So it didn’t matter what he said. He’s just having to learn how to go over their heads. I just wish he wouldn’t do it (tweet) as often.”

In Las Vegas, Trump has “brilliant business people” such as Steve Wynn, Sheldon Adelson, Phil Ruffin and Tom Barrack who are his friends, noted Newsmakers host Sam Shad. He asked Tarkanian what is the public missing in Trump that these people see?

“I don’t want to call him a business shark but he is very savvy,” Tarkanian said of Trump. “He is two to five steps ahead of you and I.

“Maybe it doesn’t seem that way because a lot of people knock his vocabulary as not being the most extensive but the guy is sharp,” Tarkanian said of Trump. “And so by the time he has already done 10 tweets or made five business deals, I’m just waking up in the morning. He obviously has got a lot of experience that helped him get to the place he is at now. And if he’s this close with all these brilliant business people, then I think we need to maybe take a step back and learn a little thing or two from him.”