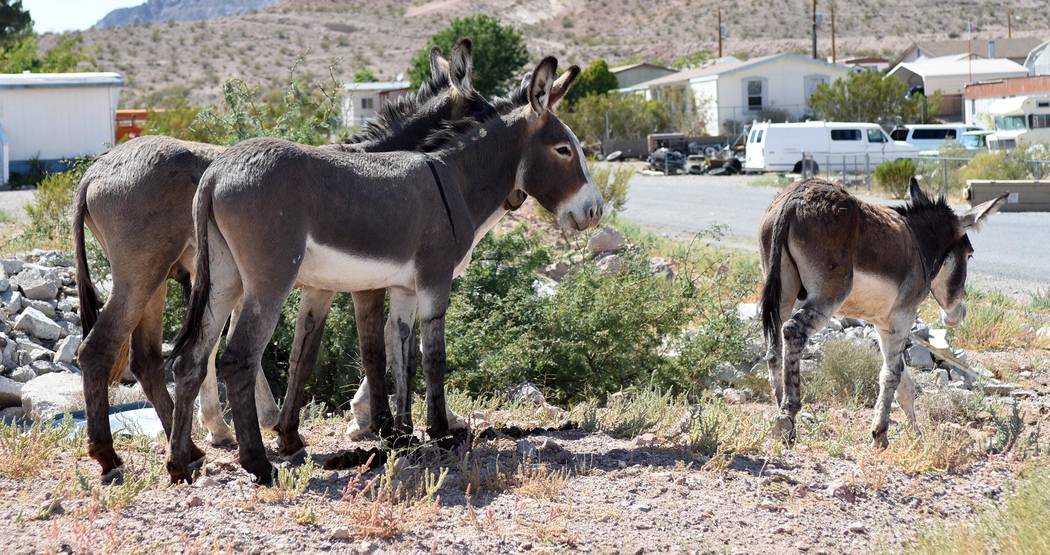 Richard Beatty/Special to the Pahrump Valley Times Burros stand alongside the road in Beatty. 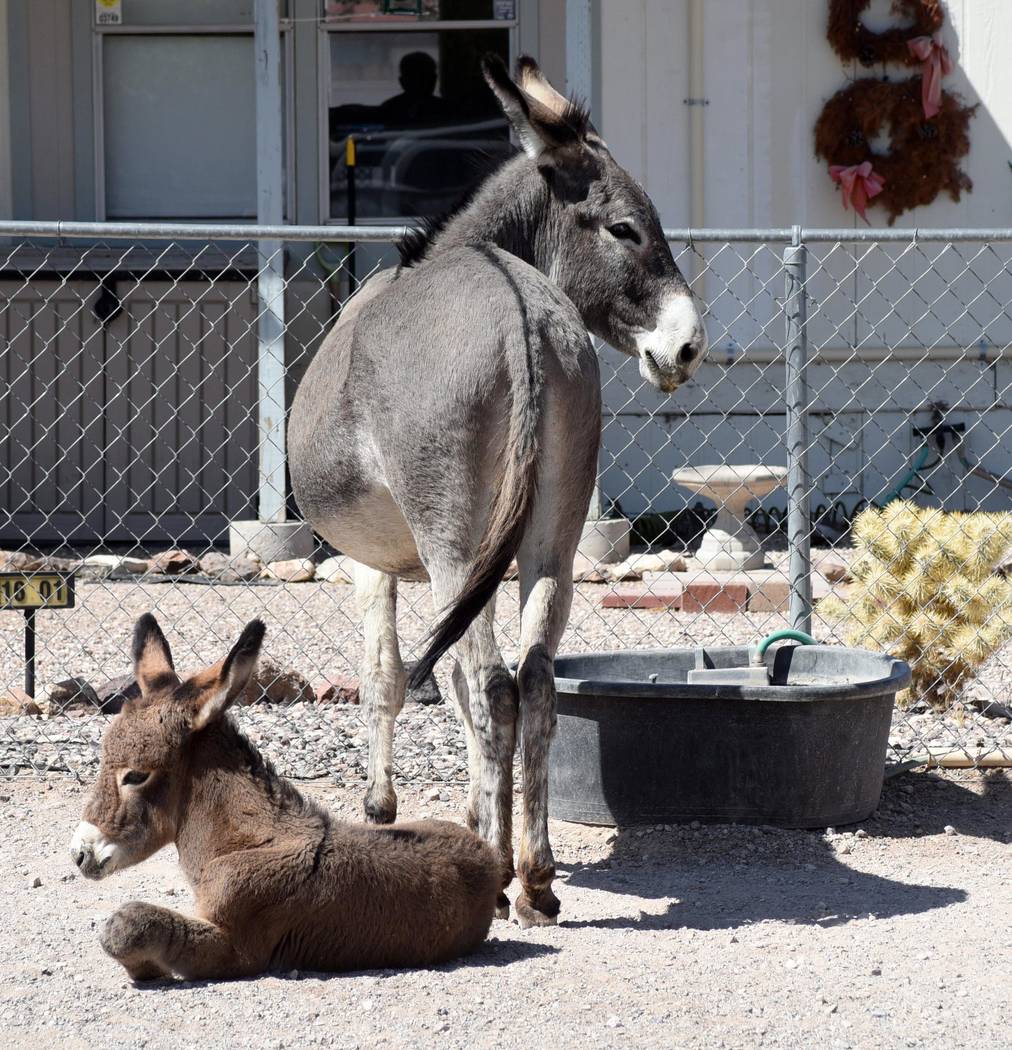 Richard Beatty/Special to the Pahrump Valley Times A burro drinks out of a tub put out by a Beatty resident. 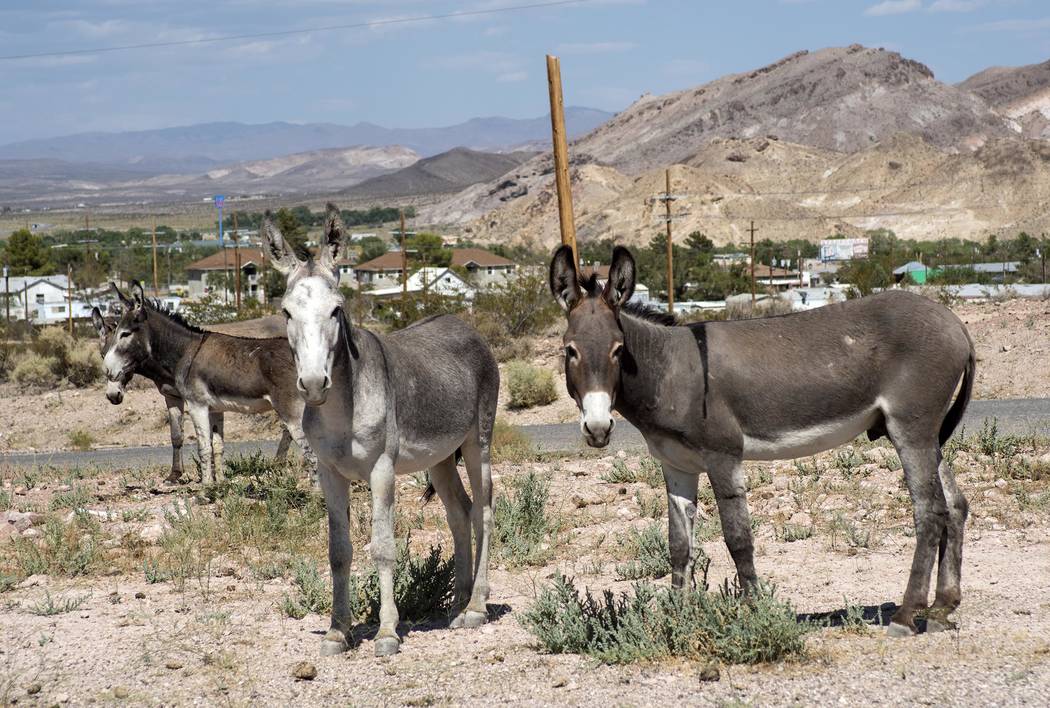 Richard Beatty/Special to the Pahrump Valley Times Curious burros on the side of the road in Beatty.

Certain topics are guaranteed to draw a crowd to Beatty Town Advisory Board meetings—ordinance changes, building codes, stray dogs, and topping or near the top of the list, burros.

The agenda item for the Aug. 14 meeting read, “Discussion, deliberation, and decision to send a letter to the U.S. Bureau of Land Management requesting the removal of some of the burros in town.” It was sponsored by board treasurer Erika Gerling.

The number of burros roaming the streets of Beatty has steadily grown in recent months. Gerling said that, just looking from the deck of her house on Lover’s Hill, she had counted one group of 12, another of nine, one of five, and one burro that always seemed to be alone.

The increase in numbers has not gone unnoticed by the BLM. David Hullum, from the BLM Tonopah Field Office, said that the count is not official yet, but they estimate there are about 750 burros in the Bullfrog Herd Management Area (HMA), which surrounds Beatty.

The BLM has not determined an “appropriate management level” for the entire Bullfrog HMA, and the matter is under appeal.

Most of the Beatty residents who provided comment at the meeting were in support of the burros, sometimes passionately.

Ann Grace, one of the owners of Studio 401, said the burros were a tourist attraction and good for business. She also said that it was not a good time of year for a round-up.

Grace also said that she had been told by someone from NDOT that burros were able to get onto the highway because of wire-cutting vandalism of fences.

Karen Jacoby shared a video from a wild horse protection organization showing what they called inhumane round-ups of wild horses. She said that recent legislation will give the BLM authority to euthanize animals or sell them to slaughterhouses.

The video promoted using contraceptive fertility control to manage the animals’ population, rather than using round-ups. Hullum said the BLM is experimenting with that in some HMA’s. Jacoby asked that the board reject any call for a round-up and seek alternatives instead.

Donna Wright was perhaps the most passionate burro supporter. She said that, from childhood days in Beatty, “One of my first memories is hearing the burros at night clopping down the street, and I’ve been in love with them ever since.” She said she considers them citizens of the community.

Wright said that the burros protect the town from coyotes which prey on people’s small pets. “If you remove the burros, watch your pets,” she warned.

Wright has been experimenting with bear scent to keep burros away from areas where they are not wanted.

New resident Edward Huffman said, “This town is a throw-back of Americana,” and that “the burros make the town.” Regarding rounding up and removing the burros, Huffman said, “We’re starting to treat the burros like we did the Indians in 1860. Round them up and get rid of them.”

Fred Summers said that the burros “do a fantastic job of speed control” as people slow down to look at them.

One resident complained that the last time the BLM removed burros from town “all the good burros, the friendly ones, were gone.”

Kurt Wenz said the burros are a nuisance. “They fight and kick cars.” He also said they were a safety issue, that three of his co-workers at US Ecology Inc. had hit burros with their cars going to work in at three in the morning.

Whether tourists stopping beside the road was a good thing or bad depended on a speaker’s point of view. Some saw it as causing more tourists to stop in the town, while others saw it as a safety hazard.

Gerling said, “They are wild animals. They are not pets. Every time I see someone with a little child trying to feed a burro, I think, ‘Oh, my God, I hope the burro doesn’t kick the kid or bite its hand off.”

She also said she was disappointed that people only attended the board meetings for something like the burro issue, and not for other things.

In that same sentiment, Beatty Water and Sanitation District Manager Rob Shirley said that burros were far from the most pressing issue facing the community and worthy of attention and action.

Shirley shared a document he had prepared, including many photographs, listing and detailing other problems that he said were of a higher priority. These included such things as abandoned and illegally occupied dwellings, abandoned vehicles, appliances and trash in yards, and an increase in crime.

Shirley, who has joined the Nye County Sheriff’s Office Auxiliary Unit, said the town needs to work on prioritizing and tackling these problems. That sentiment was echoed by Teresa Sullivan.

The board responded to the burro question by agreeing to send a letter to the BLM, not asking for a round-up or gathering, but for information on the agency’s plans in the matter.

Richard Stephens is a freelance writer in Beatty.