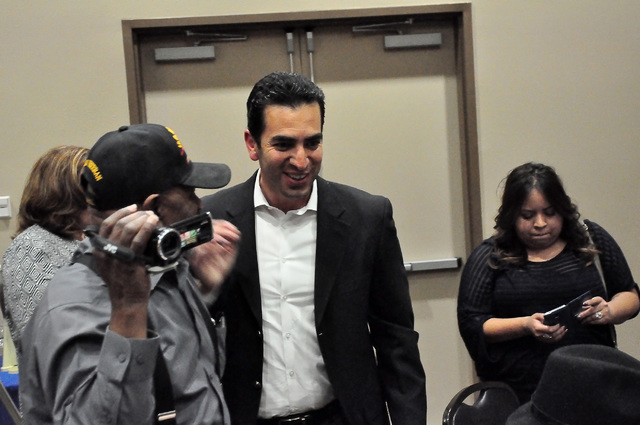 Ruben Kihuen at a Democratic fundraiser in Pahrump in April. The newly elected congressman wants to use his seat in Congress to reform the country’s immigration laws, stop efforts to privatize Social Security and Medicare and raise the minimum wage. Special to the Pahrump Valley Times

WASHINGTON — Ruben Kihuen is humbled and honored to be in the U.S. House of Representatives, but politics and governing were not his first priorities when he was growing up as an athlete.

“My first goal, my first dream was to play professional soccer, not to be in the halls of Congress,” Kihuen said from a couch in his spartan Cannon House Building office on Capitol Hill.

His dream was to play professional soccer in Mexico, a goal dashed by a broken foot.

Now, following a fast political rise as an aide to Senate Democratic Leader Harry Reid and a stint in the Nevada Senate, Kihuen wants to use his seat in Congress to reform the country’s immigration laws, stop efforts to privatize Social Security and Medicare and raise the minimum wage.

“The most important thing a representative can do is give a voice to his constituents,” Kihuen told the Review-Journal.

Kihuen, a Democrat, will represent Nevada’s 4th Congressional District, which includesNye County, North Las Vegas and central portions of the state. Roughly 30 percent of the population in the district is Latino, and about 7 percent is Asian, according to recent Census Bureau figures.

Congress has struggled with immigration reform, failing several times in recent years to pass laws that would streamline an archaic system with politicians on both sides of the aisle decrying it. Both sides disagree, however, on the approach and legalization.

President-elect Donald Trump made the issue a central plank of his campaign, calling for a border wall between the United States and Mexico and promising to step up deportation of the projected 11 million people here illegally.

Kihuen, who was born in Mexico and immigrated to the United States with his parents when he was 8, said that for a time, he was living in the U.S. on an expired visa. He is now a naturalized citizen.

“At one time, I was undocumented,” Kihuen said. “It’s good to have that perspective.”

That perspective is welcomed by immigration reform advocates.

“The congressman is the personification of the American dream. His life story is one of his family pursuing a better life,” said Ali Noorani, executive director of the National Immigration Forum. “Now he’s the one with the pen helping to write these laws.”

Kihuen moved to Mexico with his mother in 1988. His father was a teacher but had come to California as an agricultural field worker.

His parents became citizens, and Kihuen went to school. His love of soccer — from playing in the streets of Mexico to playing on organized teams in the U.S. — helped him land a position on the now-defunct Las Vegas Strikers, a semiprofessional team.

Last week, the freshman lawmaker was assigned to the House Financial Services Committee, which oversees the country’s housing laws. That’s an important issue for Nevada, which was delivered a crushing economic blow during the Great Recession.

Kihuen said that in addition to committee duties, he plans to be active on the immigration front in the House Democratic Caucus and the Congressional Hispanic Caucus.

He plans to hold the new Trump administration accountable. Kihuen said he was offended during the presidential campaign when immigrants were categorized as rapists and criminals.

“People are tired of the partisan rhetoric. I am too,” he said.

Kihuen is not opposed to harsh penalties for criminals, immigrant or not.

He supports immigration reform legislation that would provide a path to citizenship for undocumented immigrants currently working and living in this country.

Kihuen said that is what makes this country great. He comes from a family that was given that opportunity.

“I am indebted to this country,” Kihuen said.