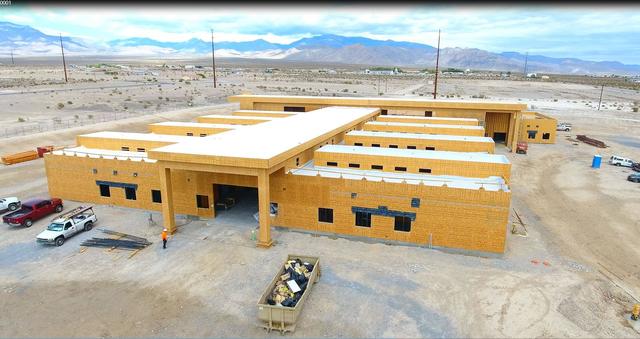 The under-construction 58,000-square-foot Healthcare Partners medical building, located at 1397 S. Loop Road, is on track for its planned fall opening. The new medical office building, which is scheduled to be completed by September 2017, will provide a vast array of medical services, including primary care, oncology, cardiology, urgent care, medical imaging and testing. Special to the Pahrump Valley Times

The under-construction 58,000-square-foot Healthcare Partners medical building located at 1397 S. Loop Road, is on track for its planned opening next fall.

The new medical office building, which is scheduled to be completed by September 2017, will provide a vast array of medical services, including primary care, oncology, cardiology, urgent care, medical imaging and testing.

The facility includes eight pods with 72 exam rooms, a 1,000-square-foot pharmacy, a 2,000-square-foot Humana Guidance Center, and an urgent care center that is open 16 hours a day for 364 days a year. A coffee shop for guests’ convenience is also planned, but a local vendor is still being sought to operate the location.

Jeremy Cox, vice president of operations for Healthcare Partners, said that the building process has been a smooth one so far, since breaking ground in March.

“The building is actually on-plan to be opened in September 2017, so we’re very excited about it,” Cox said. “Thus far on track, it went from dirt, to a structure with nice, pretty walls and a footprint in no time.”

During construction, over $3 million dollars has been used to contract with Pahrump Valley contractors. The site has utilized over 400 tradespeople that have worked on the medical office building.

Once the new medical building is complete, all the smaller Healthcare partner clinics in town will close incrementally.

“It will be a staged approach so that it will be a very coordinated effort,” Cox said. “We’ll move the locations into the facility over time. It won’t be all at once, it will be very strategic.”

The consolidation of all the facilities into one large space was made a priority after HealthCare partners saw residents don’t like to commute from place to place for care.

“So having it all centralized will create a lot more convenience.”

To ready residents for the new facility, there will be several meetings ahead of the September 2017 opening to acquaint Healthcare Partner patients with the new digs.

“We’re going to have plenty of open houses to make sure the patients in the area are very familiar with the building, the locations and to ensure their providers are there,” Cox said. “We’ll have several of those over the course of the next year.”

HealthCare Partners estimates that the current facilities in Pahrump see anywhere between 10,000 and 20,000 people annually and they expect that number to rise when the new medical office building opens next year.

Cox said that HealthCare Partners will look to fill out the staff as the year goes forward, with no big hiring event in the works as of yet.

“We’re anticipating well over 100 teammates working there,” he said. “We actively have a team of employees working with us and there’s openings all the time. People can apply online and we’d be glad to get them into the system now.

“For a massive job hiring, we’re not anticipating a big event; we’ll have to wait until we’re a little closer to the opening and if needed, we’ll do it at that time with a possible job fair.”

Open enrollment for Medicare begins this week, and Cox urges those interested to plan ahead before signing up for a plan.

“It’s just about patient choice and options and it depends on plans … And we have the biggest plan in Nye County now,” he said.

Cox said those looking to sign up for Medicare should log on to OpenenrollmentNV.com to review plan options.

“What it is in essence in open enrollment is us providing options to access of a team of medical professionals, getting the wellness checks in advance, as part of our total care model. It creates greater ease on the counts of prescription drug pain and an alternative to that.”