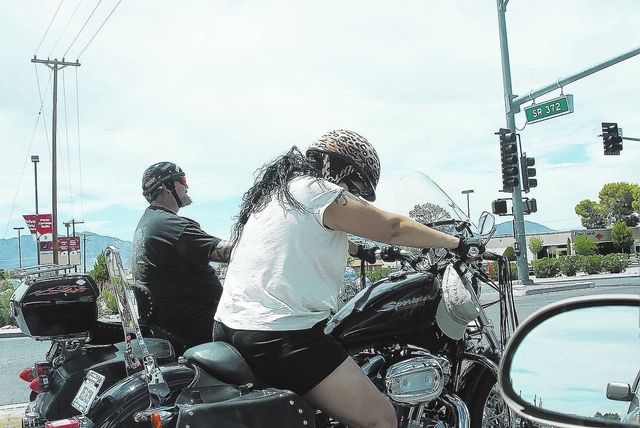 A new law that recently went into effect will now allow motorcyclists, bicyclists, trimobile and scooter riders to proceed through a red light if they’ve been sitting at an intersection for some time without a green light allowing them to continue traveling through the area.

The “proceed on red” legislation, which went into effect yesterday, will lawfully allow drivers of smaller vehicles, such as motorcycles and bicycles, to turn left or proceed through red lights at signalized intersections after waiting through two complete signal cycles without the activation of a green light, according to the Nevada Highway Patrol. Motorists, however, will still need to yield to pedestrians and oncoming traffic.

The law was reportedly designed to help improve mobility for motorists across the state.

According to NHP, sensors in traffic signals are triggered by the metal surface area of a vehicle and its alignment with signal detectors. Sometimes smaller vehicles such as motorcycles, bicycles, scooters and trimobiles, can’t be detected by the signal detectors, meaning a red light won’t turn green since the light doesn’t register the vehicle is sitting there.

Kevin Mayer of Parker’s Kawasaki, located at 1201 S. State Route 160, said store employees have casually been talking to customers about the new law, but said not many motorists have seemed overly excited about the change in legislation. Mayer noted many motorcyclists and bicyclists have been turning left on red for years, whether it was legal or illegal, but said it would be nice to continue through traffic legally now, instead of having to break the law.

Parker added those making the new left turns on red just need to use caution as they proceed through local intersections.

NHP Trooper Loy Hixson said as the law takes effect, drivers of larger vehicles and cars should be more aware of the possibility there may be a motorcyclist or bicyclist passing through an intersection.

“If anything, as people come to these intersections, they should be a little more aware, pay a little more attention as this law goes into effect to help increase the safety of motorists on our roadways,” he said.

Although as of Tuesday morning Hixson said there hadn’t been any reported problems yet with the new law, the trooper added NHP will continue to promote its safety campaign throughout the month of October to educate motorists on the new legislation.

“This being day one we really haven’t seen anything, but that’s why we have this education campaign going on through the month of October and into November so we can bring this awareness to motorists, those who are driving cars and larger vehicles, that if they come to an intersection to be aware there is a possibility of a bicyclist or motorcyclist who may be going through. Providing the education and getting rid of those distractions will keep everybody safe,” he said.

As part of that safety campaign, NHP will be posting billboards, TV and radio ads throughout the state to educate the public on the new law.

For more information on the new legislation and other safety information, visit SafeOnRed.com.