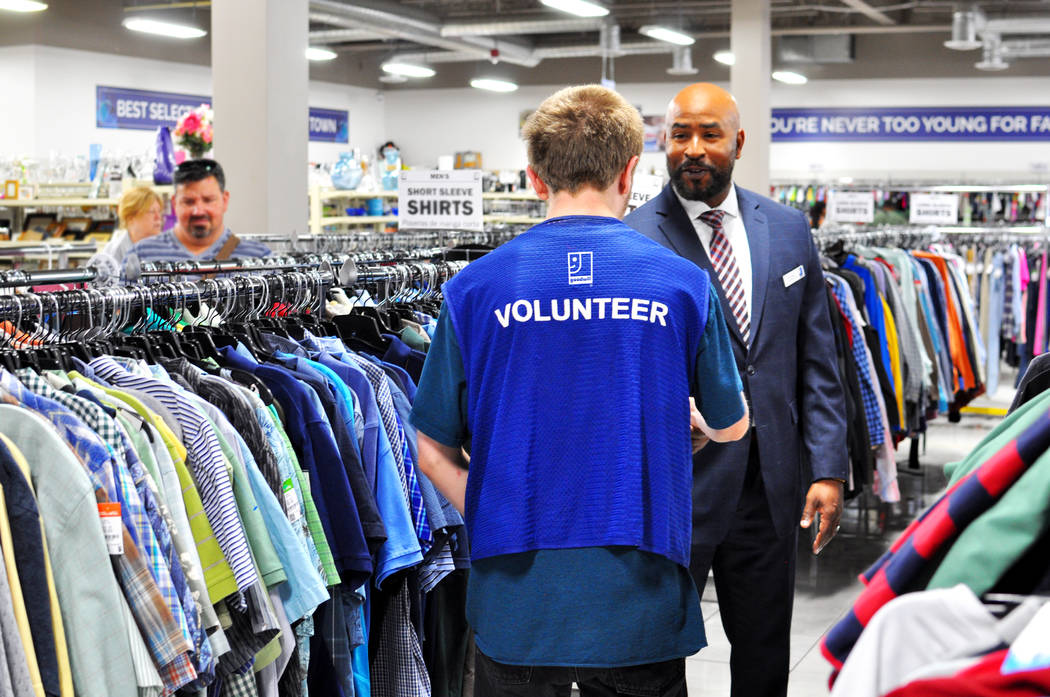 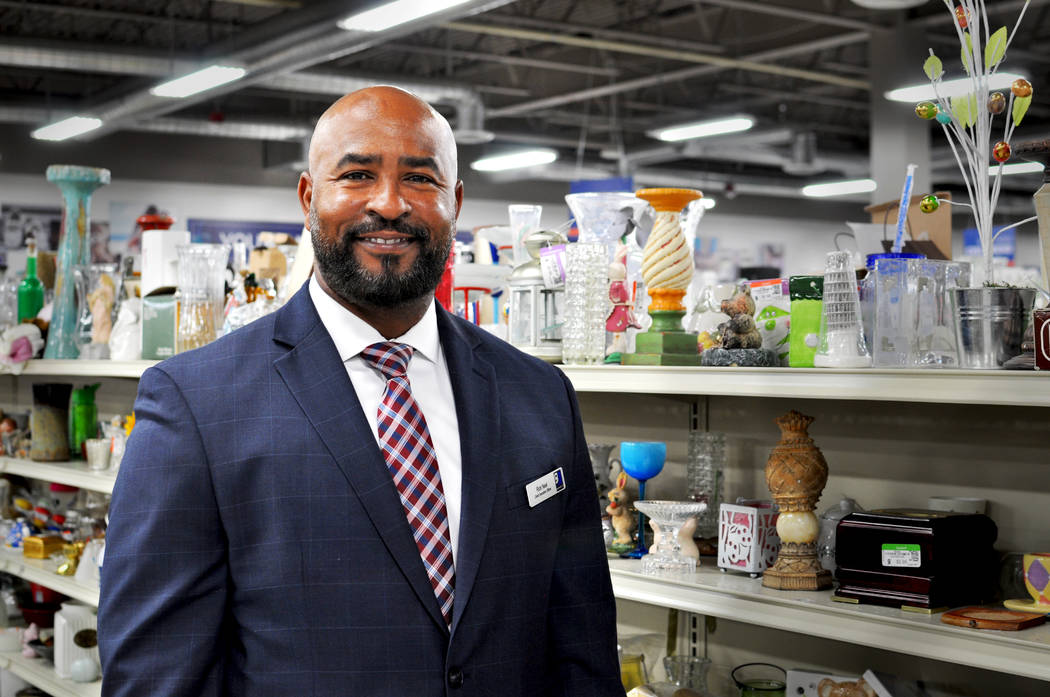 Courtesy of Goodwill Southern Nevada Richard D. (“Rick”) Neal, Jr., a former U.S. Air Force colonel and former COO for the Clark County School District, to the helm of Goodwill in late June. Neal will lead the charge for the organization’s 15 retail stores, which includes one location in Pahrump, and two clearance centers, along with the nonprofit’s career services division. 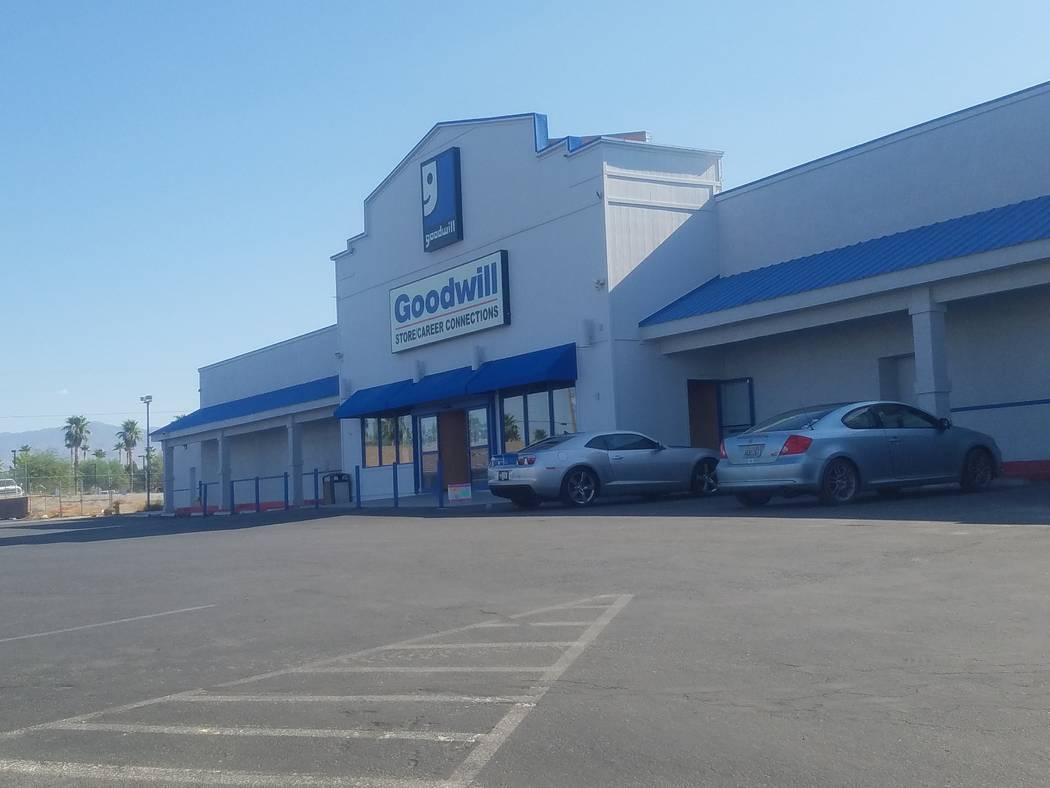 David Jacobs/Pahrump Valley Times Goodwill Industries of Southern Nevada Inc., parent company to the Goodwill retail store in Pahrump at 1201 S. Loop Road, emerged from Chapter 11 bankruptcy in the first half of 2019. The organization named Richard (Rick) Neal Jr. as its new CEO in June.

Goodwill Industries of Southern Nevada Inc., which emerged from bankruptcy some four months ago, named a new CEO this summer.

Richard D. (“Rick”) Neal Jr., a former Air Force colonel and former COO for the Clark County School District, took the helm of Goodwill in late June. Neal will lead the charge for the organization’s 15 retail stores, which includes one location in Pahrump, and two clearance centers, along with the nonprofit’s career services division.

“I just think that it’s important that everybody knows that each piece of this organization, whether it be retail or mission is important to the overall mission,” Neal said in an interview. “I’m extremely happy to be here with this great team that I’ve got to lead. I think we are set up for optimal success, and we just want to make sure that everybody knows that there’s something at Goodwill for everyone.”

Before he began his tenure at the school district, and now Goodwill, Neal spent 25 years in the Air Force. His last post was as commander of the 799th Air Base Group at Creech Air Force Base in Indian Springs: Prior to that, he was stationed at Scott Air Force Base in St. Clair, Ill.

Neal is originally from Charlotte, N.C.

After Neal exited the Air Force, he said he wanted to stay in the Las Vegas area. When the position at the school district became available, he seized the opportunity. He worked as chief of staff for two years and two years as COO.

Neal left the school district in Clark County earlier in 2019 “after an outside report, requested by new Superintendent Jesus Jara, found deficiencies in the school system’s operations, including that it appeared to have a culture of ‘relying on out-of-date practices with no apparent sense of urgency’ to move into the 21st century,” a June 19, 2019 report in the Las Vegas Review-Journal stated.

In an interview, Neal said, “I don’t have anything to say about that report.”

After leaving the school district, Neal was again searching for his next venture.

Neal said some of his mentors had asked if he considered the “nonprofit arena.”

Neal expressed interest to one of the nonprofit’s 14 board members who introduced him to the interview process.

“I went through the process, which was a pretty extensive process,” Neal said. “I’ve only been engaged in one other that was more detailed and focused …” He was selected for the position and named CEO of Goodwill in June.

In 2017, Goodwill Industries of Southern Nevada Inc. filed for bankruptcy protection. According to the June report in the Review-Journal, that filing followed “an aggressive expansion and hefty bond sale, and after it fell behind on its rent at most stores.”

“It emerged from bankruptcy in April. Its reorganization plan called for some debt forgiveness and a new debt-payment structure, and cemented previously renegotiated retail leases, Goodwill’s prior CEO, John Helderman, said at the time,” the Review-Journal reported.

According to the Review-Journal report, Helderman had joined as interim chief in May 2017, following the departure of former chief executive Steve Chartrand. Helderman had initially planned to only stay for 90 days but ended up staying for two years.

A reporter from the Pahrump Valley Times asked Neal if there is any heavy lifting going forward with Goodwill.

“If you’re going to be a CEO, there’s always going to be a heavy lift or else your organization’s going to end up being irrelevant,” Neal said. “That said, the coming out of bankruptcy, the emerging from bankruptcy, the team that is in place now, and that includes the gentlemen that I replaced, John Helderman, he’s helping with the transition and hoping to stay associated with the organization as he goes back to his private business that he put on hold while he helped bring this organization through.”

Neal said, “They have done an outstanding job of turning the organization around and getting it on the right trajectory and moving in the right direction.”

“We got into a positive cash situation,” Neal said. “We are actually strategically looking at okay are there expansion options, and if so, is it right to do right now? Are we in the right areas in the market? All of those things.”

“Really what it comes down to is discipline in the business process and managing the assets that we have right now and servicing the debt and making sure that we take care of those covenants, so that we’re on solid fiscal ground,” he said.

Neal said there is room for expansion in the Las Vegas Valley and that Goodwill is opening a new location in the October/November time frame at Rainbow Boulevard and Cheyenne Avenue in Las Vegas.

“That store, right now, and donation center, is being built out,” Neal said. “The key, when we’re building a store, is to make sure … you look at what the return on investment on that store is going to be, and can you afford it?”

No other expansion is planned for next year as of yet.

“We will look at possible expansion next year. But what we’re not going to do is what I call getting out over our skis or getting out in front of our headlights.

“If expansion makes sense, because there are several places in the Valley where we don’t have a real retail presence, so it makes sense in a geographical sense, but it has to make sense across the fiscal sense as well,” Neal said.

Donations are a large part of Goodwill’s organization.

Goodwill carries a large variety of goods: electronics, clothing and other items.

But there is opportunity for change in how these goods are sold.

“It comes in our e-commerce on how we get these products to the customer, so the customer can see them—not that we want to move away from brick-and-mortar stores, but we also want to leverage that e-commerce, because a lot of people aren’t,” Neal said.

Goodwill’s main holdings are in Las Vegas, but Neal said the Pahrump store is also central to the organization’s overall success.

“The crew out there works very hard, and they have some extremely loyal customers that help make that store a very important part of our overall operation,” he said. “That is by no means just kind of a fringe store of any kind. No, it’s central to our overall success.”

Goodwill, which was founded in 1975, also has its career services side of the business, an important end of the organization.

On Goodwill’s website, its mission statement reads, “To reduce the impact of poverty on people, families, and our community by helping Southern Nevadans get jobs with local employers and Goodwill.”

“…There’s also strategic planning that goes into our mission of connecting people with jobs in our community,” Neal said.

“I want to partner strategically with the chambers, and local business and people that are looking for employees, because we have people,” Neal said. “There’s a variety of things that can keep a person from actually finding a job. Sometimes it’s a skill set—a soft skill, hard skill, some sort of scaffolding or support, or sometimes it’s ‘I need access to a computer so I can fill out that application.’”

Neal said, “We want to be there to bridge that gap, and so that’s a strategic effort also. You can sit and wait for people to find you. That’s absolutely a way to go, but that’s only going to get to certain folks.”

Goodwill served some 8,500 people at its two career centers in Las Vegas in 2018. The nonprofit had three locations, but it’s down to two, according to Neal.