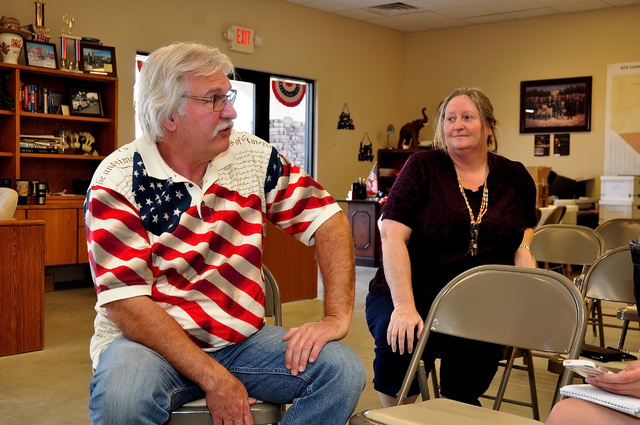 “My philosophy is that a good chair listens to the membership, provides direction as far as letting all sides speak their piece so that a decision can be made without my prejudice being involved with it as much as possible,” he said.

At the April 16 meeting, members of the committee selected Burdzinski and LisaMarie Johnson as vice chair.

Additionally, members of the committee selected a new delegation to the Nevada Republican Party and formed a new executive committee for the NCRCC.

Burdzinski and Johnson talked to the Pahrump Valley Times on Wednesday about their vision for the NCRCC.

Burdzinski moved to Pahrump last year from Macomb Township, a northern suburb of Detroit. He said he fell in love with the town when he came to visit his brother-in-law in 2014.

Burdzinski also was the chairman of the Ted Cruz campaign in Nye County.

“Politics was always something that I was just passionate about and liked to do,” he said. “I started off when I was 21 years old and I haven’t left.”

He is currently retired but worked as an auto mechanics teacher and administrator in a community college in Michigan.

Johnson first came to Pahrump in 2011 when she worked for the Ron Paul campaign. Prior to getting involved in politics she worked in advertising and public relations.

“Pretty quickly after I got involved in politics, I started realizing this is really where my passion was,” she said.

Most recently, Johnson worked for the John Kasich campaign for several days.

Johnson and Burdzinski are Nye County delegates to the Nevada Republican Convention in Reno that will take place on May 14-15.

Burdzinski said he now wants to unite constituents of different presidential candidates ahead of the general election.

“People get very passionate about a candidate they support. Once the primary’s done and emotion kind of goes away, everybody will join together and that’s what our job is, to bring us all together,” he said.

Burdzinski competed against Pahrump political activist Dave Caudle for the seat. Burdzinski said he was backed by members of the committee who support different presidential candidates.

“It shows that, and I believe that we can bring us all together, so we are a strong united front,” he said.

Johnson and Burdzinski will both serve for a year, replacing former chairman Bill Carns and former vice chairman Leo Blundo, who is now running for Nye County Commission District III.

“I think that we are going to work very well together,” Burdzinski said about Johnson. “I think that philosophically we are very close on our political philosophies.”