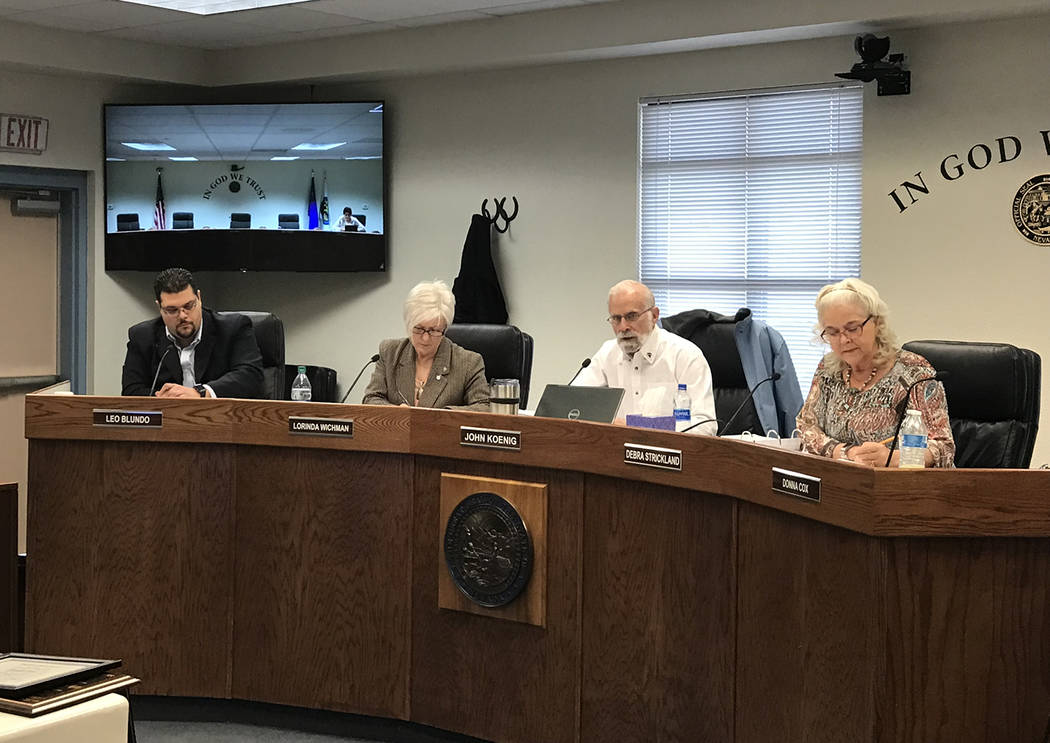 The Nye County Commission officially has a new makeup, with recently elected members Debra Strickland and Leo Blundo taking their seats beside John Koenig, Donna Cox and Lorinda Wichman as of Monday, Jan. 7.

The first commission meeting of 2019 was held that morning and one of the first items of business was the election of a chairperson and vice chairwoman, who will hold those positions for the next year.

Commissioner Koenig took on the task of chairman in 2018 and his fellow commissioners appeared to feel he has done a good job at the helm of the meetings. Koenig was unanimously re-elected for the position of chairman during Monday’s meeting.

“I’d like to make a nomination,” commissioner Wichman stated. “If you will accept it, I would like to keep you on as chair. I think you are doing a fine job.”

Commissioner Donna Cox offered a quick second and the item passed with all in favor.

The board then moved to the election of vice chair, with Cox motioning to elect new Nye County District 5 representative Strickland. That too passed with all in favor. “Thank you. I’m honored,” Strickland said after the vote.

For the Nye County Liquor and Licensing Board, Strickland was nominated to take over for Wichman as chairwoman and Koenig was put forward for vice chair, both nominations came with unanimous approval.

With his extensive experience on the Regional Transportation Commission, former Nye County Commissioner Dan Schinhofen was the previous chair of the highway board and the chairmanship of the highway board went to another member of the Regional Transportation Commission, newly seated Nye County District 4 Commissioner Blundo. He was elected unanimously to that position while Koenig was chosen as vice chair by his fellow board members. “Thank you for the confidence,” Blundo responded following the decision.