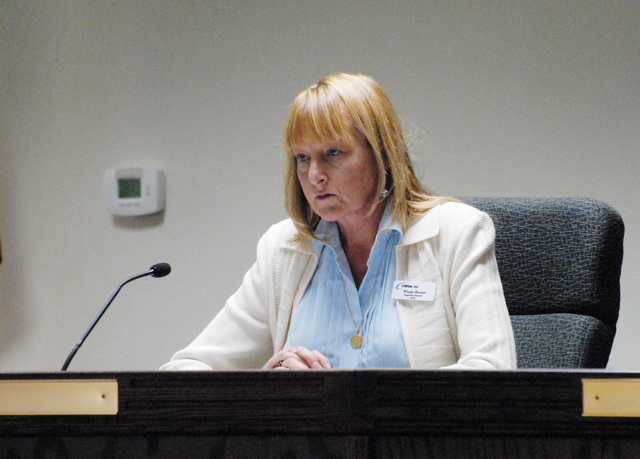 Fears of well owners having to meter their wells have so far been unfounded. Still, a Basin 162 Groundwater Management Plan Advisory Committee suggestion heard Monday may raise more anxiety for well owners.

Committee members recommended meters be required on all new wells.

The suggestion drew top billing, which meant committee members want immediate action. The committee repeated complaints there were too few people willing to participate in a voluntary well monitoring program — only six so far.

Consultant Oz Wichman suggested new well owners could be required to report their data to the state engineer annually.

But committee member Kristian Bentzen said they shouldn’t be afraid of the state, adding they were putting the cart before the horse. He said the county has 10 years to come into compliance.

“I’m in favor of all new residents, let me emphasize that, new residents, to have a meter on there to help compliance, to help the state engineer,” committee member Greg Dann said. “We have to think about the future and we need information and our newly-organized volunteer well metering program isn’t really taking off. So I’d say let’s put it on the new residents, get them on board and they’ll be less resistant because they’re new and this leaves the current people out.”

Committee member Walt Kuver felt the water level was more critical than usage figures. But he said the minute owners get a meter on their well, usage will drop, adding it would be a good tool to make people aware of the declining water level. Data from the county’s geoscientist, Levi Kryder, showed 85 percent of domestic wells have suffered a decline in water levels in the past nine years.

“Where you have the greatest drop in the water level is where there’s the highest density of domestic wells. So we are having discussions about managing the basin differently in different areas,” Wichman said.

Nye County Water Board Chairman John MacLaughlin said there’s often references to the 11,200 wells sunk in the Pahrump Valley. But he asked, “How many of those are nothing but on a pipe that’s in the ground on an empty lot? When you sink a pump down into that hole I think that needs to be a time you put in a meter.”

The committee rejected the idea of using Smart Meters.

There was almost no support for a suggestion to prohibit private wells within a utility service territory. Barnett said it was an overly simple statement.

“UICN is much different than Pahrump Utilities or Desert Utilities with lots of areas with no infrastructure and literally a million dollars to get the infrastructure there,” Barnett said. But she added, “somehow we have to encourage pipe over domestic wells in an over-appropriated basin. There’s no doubt someone on a utility system that gets a monthly water bill is going to be using less water than somebody on a domestic well.”

“There are so many properties beyond the end of your pipes it would be so prohibitive to hook them up,” Bentzen said. “Can you just redraw the tariff area in and now they can submit to get their well?”

Barnett said she can’t refuse service in the UICN service territory. When her service territory boundaries change, it’s when a company like Corrections Corporation of America requests to be annexed, she said.

“Do I think with the challenges we’re facing in this basin, the work that’s being done on the master plan and zoning, that there are benefits in changing the defining line of my service territory? Yes. Do I think it is simple? No,” Barnett said. She said the Nevada Southern Detention Center is like an island, with water and sewer lines running down Mesquite Avenue but UICN is unable to service properties on either side of the street where Nye County has talked about establishing an industrial park in the area.

Two members wanted immediate action requiring all new domestic wells to be limited to half an acre foot of water. Hafen said this would be a means of enforcement with penalties of up to $10,000 per day for going over the allotted amount.

“Once again the focus is on retiring paper water rights rather than actual water. Paper water rights are just that, they’re paper. If we find a way through growth control that they’ll never be used, then they’ll no longer be an issue,” Kuver said. He marked it a lesser priority, for action in 10 years.

A suggestion to put a minimum depth on drilling a domestic well as an educational tool was scrapped.