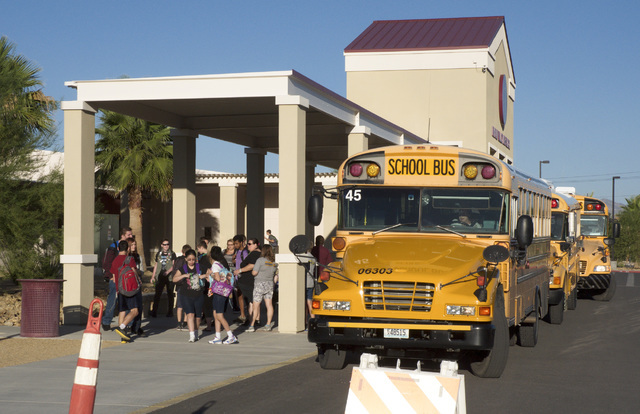 With the 2016-17 school year kicking off Monday around the county, the Nye County School District is ready to handle all that comes with ushering in a new year.

The district, which had 5,071 students in their 2015-16 student count and expects around the same amount this year, is facing a teacher shortage, as has been the case for the past few years.

The district currently has 311 teachers and is short 14 teachers for the coming school year. The news has gotten better as far as the teacher vacancies go. The NCSD had been 23 teachers short as of the July 19 board of trustees meeting.

In addition to full-time teachers, substitutes are also needed, as many from last year have moved away from the district over the summer months.

There are currently 78 substitutes in the district and that may seem like enough, but they are actively searching for more.

“We are always in need of new substitute teachers,” said Michelle Wright, NCSD human resource senior personnel technician. “We are extremely low on substitute teachers, as several have been hired as teachers through ARL and others have left the area or sought other employment.”

Cameron McRae, director of transportation for the NCSD, said about 1,800 kids in the Pahrump area will take school buses to and from school.

The district has enough drivers in place to haul those children each day, but is in need of substitute drivers.

“As it stands right now, throughout the district we have 50 routes and fortunately we have been able to fill all those routes, except for one in Pahrump and we’ll have a substitute on it, for now,” McRae said. “We still are looking for substitute bus drivers to work during the school year part time, on an on-call basis.

“But besides that, we’re ready to go.”

McRae said that they have less than five substitute drivers on hand, and that they like to have about 12 part-time bus drivers at a given time.

Having less than needed substitute drivers has recently made the staff come up with different ways to ensure personnel is there to drive buses when a full-time driver is out.

“My mechanics, my trainers or my maintenance people will end up having to drive buses if we don’t have a substitute,” McRae said. “Last year was the first year in my 14 years that we had that kind of problem.”

McRae hopes to have the vacant substitute driver positions filled as quickly as possible, but he can’t say for sure if and when that may happen, as trainers are full-time drivers for the district, and it can be challenging giving possible new hires the training required to become a sub.

“We have a shortage of substitute bus drivers. I have two that are in the final stages right now, but it’s hard to say. As soon as we get qualified applicants, we will pay for them to train. We will continue to train as time allows, because remember, my trainers are bus drivers, so they have to train between bus routes and other things to qualify, so it’s a little time-consuming, but we pay for the training if they complete.”

And with the school year getting back into session after the summer break, McRae cautions area drivers to be aware of the increase of children on sidewalks and in bus stop areas.

“Be aware, be alert, we’re going to have youngsters of all ages on the sides of the roadways walking to bus stops,” he said. “We have to be cognizant of that as drivers and try to keep everybody safe.”

Pahrump Valley High School will host an open house today from 6:30 p.m. until 7:30 p.m. on the school’s campus. Before the open house, freshman orientation will take place beginning at 5:30 p.m. to ready the Trojan newcomers for their first year on campus.

All PVHS students should have picked up their class schedules already, as they were given out throughout this past week. If your child did not get their schedule contact PVHS at 775-727-7737.