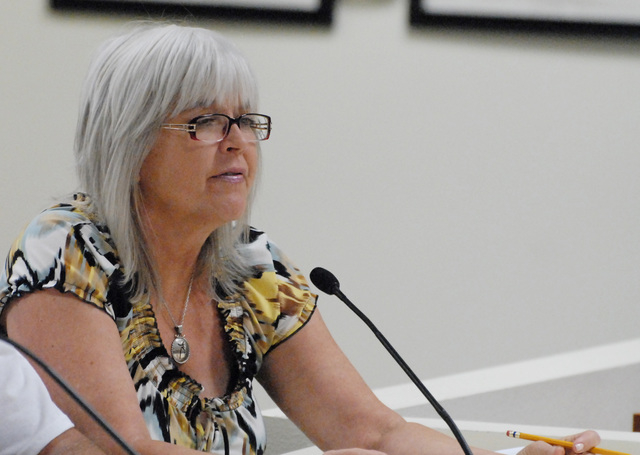 Well driller Debra Strickland, who is co-owner of Strickland Construction, said she was re-drilling a well Friday for a large family on Thousandaire Boulevard. The dig was scheduled to go as deep as 260 feet.

“They’ll have a huge usage, a big family. The water table may be at 75 feet but they’re sucking it because it’s their old, old, old, old well,” she said. “Their water use is tremendous and that’s a guy that would not benefit from a meter.”

The Basin 162 Groundwater Management Plan Advisory Committee issued a controversial recommendation last week that all new wells drilled be metered and those new well owners be limited to half an acre foot of water per year, which equals 450 gallons per day. Strickland said that shouldn’t create a hardship in most cases.

“It’s a no-brainer because we’re not using the water that we could use,” she said.

The policy would mean more money for well drillers because they get to charge for a meter, which Strickland estimated costs about $450. She said homeowners are charged about $21 per foot for drilling a well, then $1,650 for a one-horsepower pump.

But Strickland asked, “If we start installing meters today, who’s going to read them?”

The advisory committee decided against Smart Meters, used by utilities like Valley Electric Association, where meter readers can scan readings just by driving past a home. Instead the property owner would be required to self report the meter reading every year to the Nevada Division of Water Resources.

For Strickland, her business includes construction and real estate. She said there hasn’t been much demand for drilling new wells lately with the slowdown in the economy.

Committee member Greg Dann, who was appointed to represent well owners, has offered to do free static testing on water levels for well owners. Dann told the board when he’s asked how deep to drill a well, he always tells homeowners to go deeper than what the well driller tells them. Dann’s resume states he worked for a company that installed a pipeline to Yucca Mountain, was the general foreman of a pumping station for the Southern Nevada Water Authority’s second straw project at Lake Mead and supervised the construction of air-cooled condenser duct work for Bechtel at the Ivanpah solar project.

Committee chairman Greg Hafen II said if people want to drill a well more cheaply and go 80 feet deep they could run dry in nine years. But the committee decided against a proposal to require a minimum depth on drilling domestic wells, as an educational tool.

The recently-formed Private Well Owners Cooperative of Nye County, in a recent letter to the state engineer, pledged to fight for the right of well owners to use up to two acre feet of water per year, or 1,800 gallons per day. Cooperative leaders plan to discuss their concerns with State Engineer Jason King, during a series of listening sessions he has planned. They plan to attend the session at 6 p.m., Aug. 5 at the Grant Sawyer Building at 555 E. Washington Ave. in Las Vegas.

The idea of water co-ops is nothing new, a group of 70 customers at Shoshone Estates Recreational Vehicle Park in Carvers, in Big Smoky Valley, took over a struggling water system Jan. 1 and are working to comply with tough, new, federal arsenic standards.

“Our goal maybe is not unrealistic, for one, and there are areas that are doing better than our goal,” Hafen said.

Lacy said there are 8,000 lots larger than one acre in the Pahrump Valley that could potentially have new wells.

The Nevada Division of Water Resources database lists more than 11,000 wells already drilled in the Pahrump groundwater basin. The Glorieta Geoscience report said they could potentially use 5,600 acre feet of water per year, approximately 40 percent of total annual water use currently in the valley.

A lot would need to be at least one acre to drill a well and install a septic system and be in compliance with minimum separation requirements.