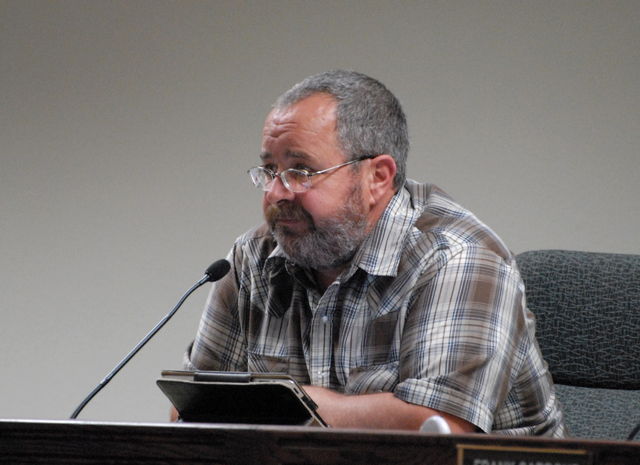 During campaign stump speeches, Schinhofen said he introduced the resolution during his second month in office. Nye County commissioners passed the resolution March 15, 2011. It states the Nuclear Waste Policy Act of 1982 as amended, selected Yucca Mountain, located in Nye County, as the only site to be characterized as the nation’s first high-level radioactive waste repository. The U.S. Department of Energy, in accordance with the act, submitted a license application to the Nuclear Regulatory Commission.

But the DOE has since asked to withdraw its submission of the license application with prejudice, which was denied by the Atomic Safety and Licensing Board and later challenged in federal court. A recent Washington, D.C. U.S. Circuit Court of Appeals decision ordered the licensing process to continue.

“The nation needs to move forward on the established NWPA strategy that provides for the permanent storage of spent nuclear fuel and high level waste,” the resolution states. It adds, “the Nye County Board of Commissioners (board) recognizes that further delays in the development of a permanent, geologic repository will result in significant public expenditures and potentially jeopardizes the future expansion of nuclear power production and energy independence.”

The resolution states until the Nuclear Regulatory Commission completes its review, the nation will be denied a scientific and technical determination of the potential of the Yucca Mountain repository to be built safely and successfully.

A resolution passed by the Humboldt County Commission April 21 adds the DOE is collecting fees from ratepayers for electricity generated by nuclear energy, while the federal government has spent more than $15 billion studying the question of the safety of long-term storage.

Schinhofen said the other counties approving resolutions are Esmeralda, Lincoln, Lander, Elko, Mineral and Churchill counties. Schinhofen said he went to most of the counties to solicit support or someone from county staff.

“What it says basically is that they want to hear the science speak, not just the politicians. The law needs to be followed,” Schinhofen said. “Some of the resolutions go further, ours does.”