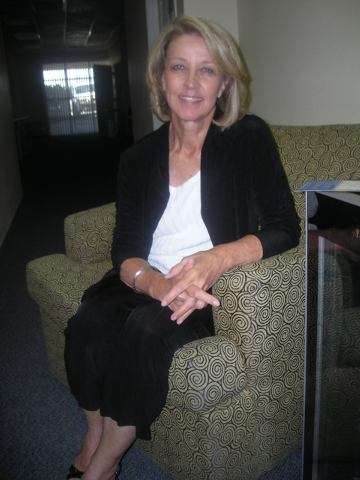 Some candidates may have taken a breather after the June 10 primary, before resuming their campaigns in the five months between that contest and the Nov. 4 general election.

Not State Sen. Barbara Cegavske, R-Las Vegas, who is running for Nevada secretary of state.

“We took no breaks. We’ve been going solid since Oct. 31st last year when we announced; the campaign has been running strong. We’ve been in all the Lincoln Day events, we’ve been at the parades. If I’m not there personally we have walkers in the parades. We are now gearing up for the fairs that are coming up, we’re gearing up for all the events that happen in the 17 counties and especially with our 150th anniversary coming up this year, there has been so much to celebrate,” Cegavske said during an interview at the offices of State Assemblyman James Oscarson, R-Pahrump and State Sen. Pete Goicoechea, R-Eureka.

Cegavske appeared at what is now called the conservative men’s breakfast at 7:30 a.m. Friday at the Lakeside Casino, which has become a popular Republican campaign stop. She emphasized her position isn’t just a routine, administrative paper-pusher job, but one that can affect businesses.

“I think it’s extremely important that you have somebody in there who has a business background, which I do. My family was all small business people, my mom and dad owned a business, almost all my brothers are small business owners or have been,” Cegavske said, who with her husband ran a 7-Eleven franchise for 13 years. “When you’re doing business licensing, taxes, anything to do with business through the secretary of state’s office you want to know the impact and be able to understand that.”

Cegavske added she’s been a Nevadan for 40 years, of which 18 years has been as an elected official. She is now term limited after 12 years as a state senator. Cegavske is hoping to ride the coattails of popular Nevada Gov. Brian Sandoval to add another Republican to the state executive offices where the present secretary of state, attorney general, treasurer and comptroller are Democrats.

“You need somebody who knows and understands the process and the 63 that run the Legislature and the governor. I served with the governor in 1997 the first session he was my seat mate in the assembly. He helped me with the judiciary bills that were coming through and I helped him with the education bills that were coming through. We worked very well together and so we remain friends and he is a big supporter of mine,” Cegavske said.

Cegavske served in the Nevada Assembly from 1996 to 2002 and in the Senate since 2002, where she rose to assistant minority leader in both houses. Cegavske boasted she passed 13 bills last session and both parties supported the majority of her bills. “I worked really well with both sides and I think that’s what you need,” she said.

The secretary of state is a voting member on the state economic forum which Cegavske said is important in regards to the business portal, business licensing and other fees.

“I wouldn’t put in an executive order saying that you had to do what I wanted you to do based on my bills not getting passed. If the 63 (legislators) and the governor don’t sign something that pretty much means your bill wasn’t worthy and the 63 didn’t support it,” Cegavske said.

Asked for particulars, Cegavske said some of the executive orders had to do with election law reporting requirements and gifts. She predicted at some point there will be a challenge to what she called ad-hoc legislation.

The nationwide press has publicized requirements in some states to require photo identification to vote, but Cegavske doesn’t see that as a big issue.

A topic raised at the conservative men’s breakfast was ballot question three on the November ballot, the proposed margins tax on business.

“I was the first elected official to sign on with the chambers (of commerce) against the margins tax,” Cegavske said. “It’s a little misleading when you say that it’s for education, because it goes to the general fund.”