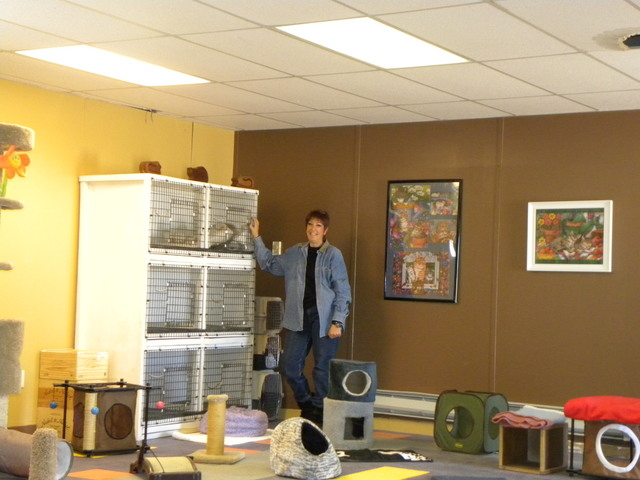 A long-awaited project is about to come to fruition as Symphony Animal Foundation is hoping to be open by Christmas.

Founder Laraine Harper said if Wulfenstein Construction paves the parking lot this week, as is scheduled, she’ll be ready for the final inspections and getting her certificate of occupancy.

The project began five years ago when Harper filed for a nonprofit status. The idea for a no-kill shelter is a result of the loss of her two beloved St. Bernards.

“I’m so thankful to have had them in my life and I want this shelter to be a tribute to them,” Harper said. “I loved them so much.”

She said age and illness catches up quickly to larger breeds and if they live eight to 10 years, they have lived a long life.

After her nonprofit status was approved, Harper went before the County Commission to ask for a parcel of land the foundation could lease. Commissioners offered her two acres off of Siri Lane on a two-year lease but were going to require approximately two “blocks” of street to be paved.

There were other issues, including the astronomical cost of bringing water, sewer and power to the property.

“I don’t have that kind of money,” Harper said.

She consulted with whom she calls “the smartest man alive” and her mentor, Ray Wulfenstein. “Ray told me it was impossible.”

Harper had three 24 x 60 double-wide trailer shells donated to her by Nye County Emergency Services several years ago when the project seemed to be spinning its wheels. The original buildings were donated to the emergency services by the Nye County School District to use as offices. It donated the remaining three to her foundation.

“It was wonderful but I had no place to put them,” she said.

Wulfenstein again stepped up to the plate and gave the foundation use of 10 acres adjoining his gravel pit on Wheeler Pass Road.

The project would have never moved forward without Wulfenstein’s help, Harper said.

“He donated use of the land until we no longer need it,” Harper said. “And because he didn’t outright deed the land, SAF was able to utilize the utilities already in place at the gravel pit without having to go through Utilites Inc. Ray is a smart man. When he developed the gravel pit and put in commercial utilities, he told me, ‘Laraine, they’re never going to make it any easier.’”

Harper said other people have also come to aid the foundation. HB Consulting donated $18,000 worth of work for plans for Harper to take to the planning commission.

“I gave the plans to (County Public Works Director) Dave Fanning and he looked me straight in the eye and said, ‘You know this is a million dollar project don’t you,’” Harper said. The plans were approved in April 2012.

She said Wulfenstein donated all the equipment, fuel and materials to do the dirt work and get the land ready for the trailers to be set. She estimated that portion of the project to be worth about $400,000. The paving will also be done by Wulfenstein Construction.

She said one reason it has taken so long to get everything done is that Wulfenstein Construction has been busy.

“They get to me when they have time and I’m grateful they’re busy, otherwise none of this would be done,” Harper said with a sweeping gesture.

It still cost the foundation nearly $5,000 to lay 1,100 feet of graduated pipeline to carry water from the existing well, and another 800 feet of sewer line to the existing commercial-grade septic system. It cost SAF another $7,600 to have the trailers moved.

She said her husband, Kevin Harper, and volunteers provided the labor.

“Of all the people on the planet, my husband hates me the most,” Harper laughed. “He’s put over 1,000 hours of labor into this place.”

“Valley Electric’s hookup fee to bring power to the property was right at $20,000,” Harper said, even though the power pole is less that 50 feet from the fence line where the power supply would later be located. “And that rate was the discounted rate,” Harper added.

The costs kept mounting. “All of the buildings had to be retrofitted from floors and paint to widening walkways, installing ramps and handrails between two of the buildings and installing a handicap-accessible restroom. All of that costs money.” Harper estimated the reconditioning of the building to run about $20,000, and said, “Thank goodness most of the plumbing and wiring inside the buildings was in place.”

She is proud to have used all local contractors during the process, including the six-foot chain link fence installed by Tiberti Fence Company. “We only fenced five acres. It cost SAF over $30,000 to have it installed.” The fence is set on a four-foot berm and will have barbed wire surrounding the facility on fence extensions.

Another $15,000 worth of outdoor dog runs, corrals and pens — all with shade — are almost complete. Harper said the setup will allow a horse trailer to back up to a round pen and unload a horse with no problem. All the pens are separated and Harper said, “We can handle problem horses better by having the pen gates open directly into the round pen.

Inside the two buildings is amazing and a labor of love. The dog building has a portion sectioned off from the shelter animals for intake purposes. “No animal can be put with the rest of the animals until they are seen by a vet and given a clean bill of health,” Harper said. “It’s all about the safety of the animals.”

Once inside, each of the kennels has a raised, heavy-duty cot, bowls for food and water and toys — mountains of toys. Harper said her volunteers have washed each one so they are sanitized. Piles of donated bedding and cushions inside removable, washable covers are stacked to the ceiling in one corner.

The cat building is an open area with kitty toys, beds, climbing trees and sunning spots is ready for its first visitors. One unfinished space will be set aside for classes, training and craft projects open to the public. Both buildings, as well as the administrative building are climate-controlled.

“We need to be able to educate people on handling and care of pets,” Harper said. “We’re planning to have local artists teach crafts and painting through animal-themed workshops. People retain more information when they learn in a fun setting.”

She said right now, the volunteers fostering animals in their homes are full. “We always need more volunteers willing to foster. It gives the animal a chance to learn some manners, be socialized with both people and other animals and the transition to a forever home is much smoother.”

There is a screening process to be an adopted parent to one of SAF’s animals. Harper said they have a collected database of people who have first adopted and then returned animals. Harper said there will be a home check and although a fenced yard is preferable, it doesn’t mean someone wanting to adopt will be turned down for lack of fencing.

“We do follow-up checks on the animals, too. Be sure everyone is getting along.”

Harper said when the shelter opens, she can handle about 30 dogs of varying sizes and an equal number of cats. “We’re limiting the corrals to three horses. They are expensive to maintain and medical issues can be very expensive.”