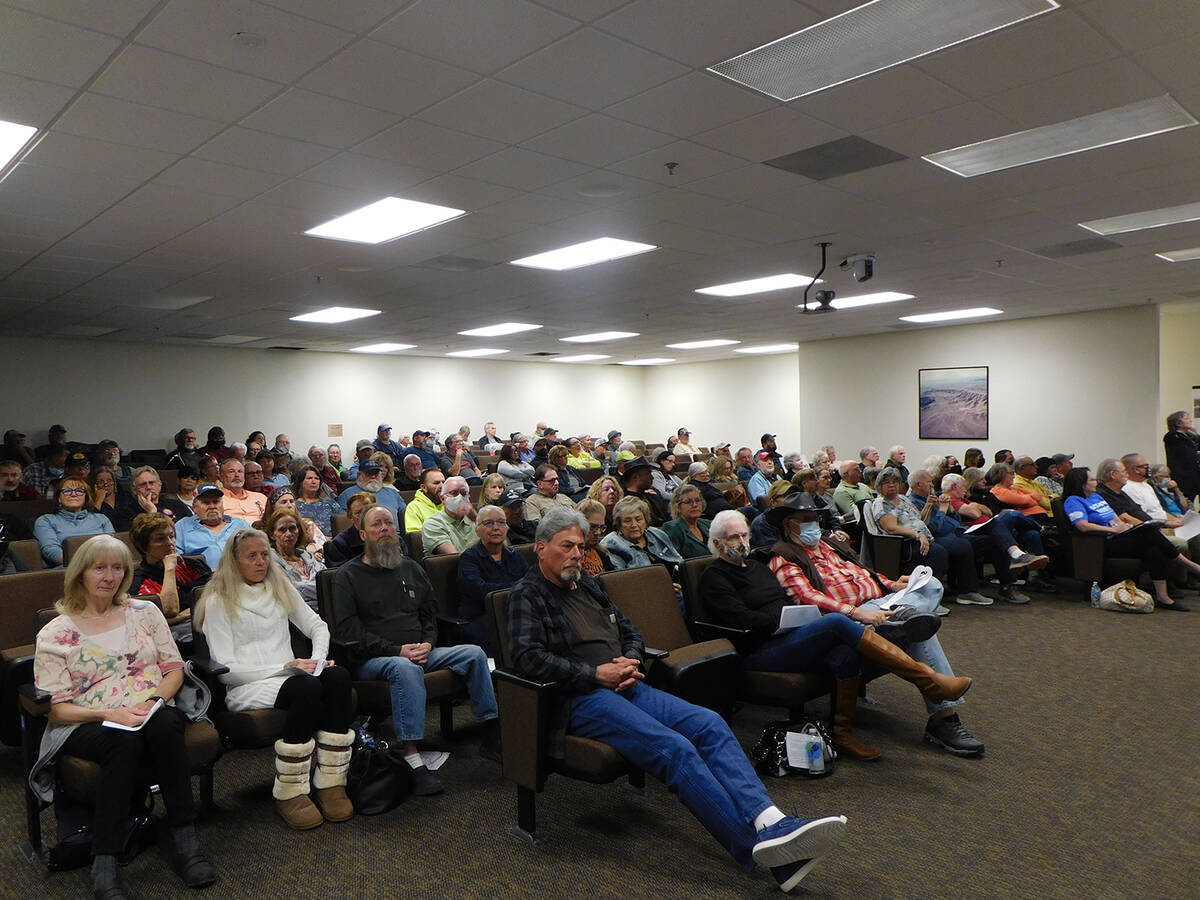 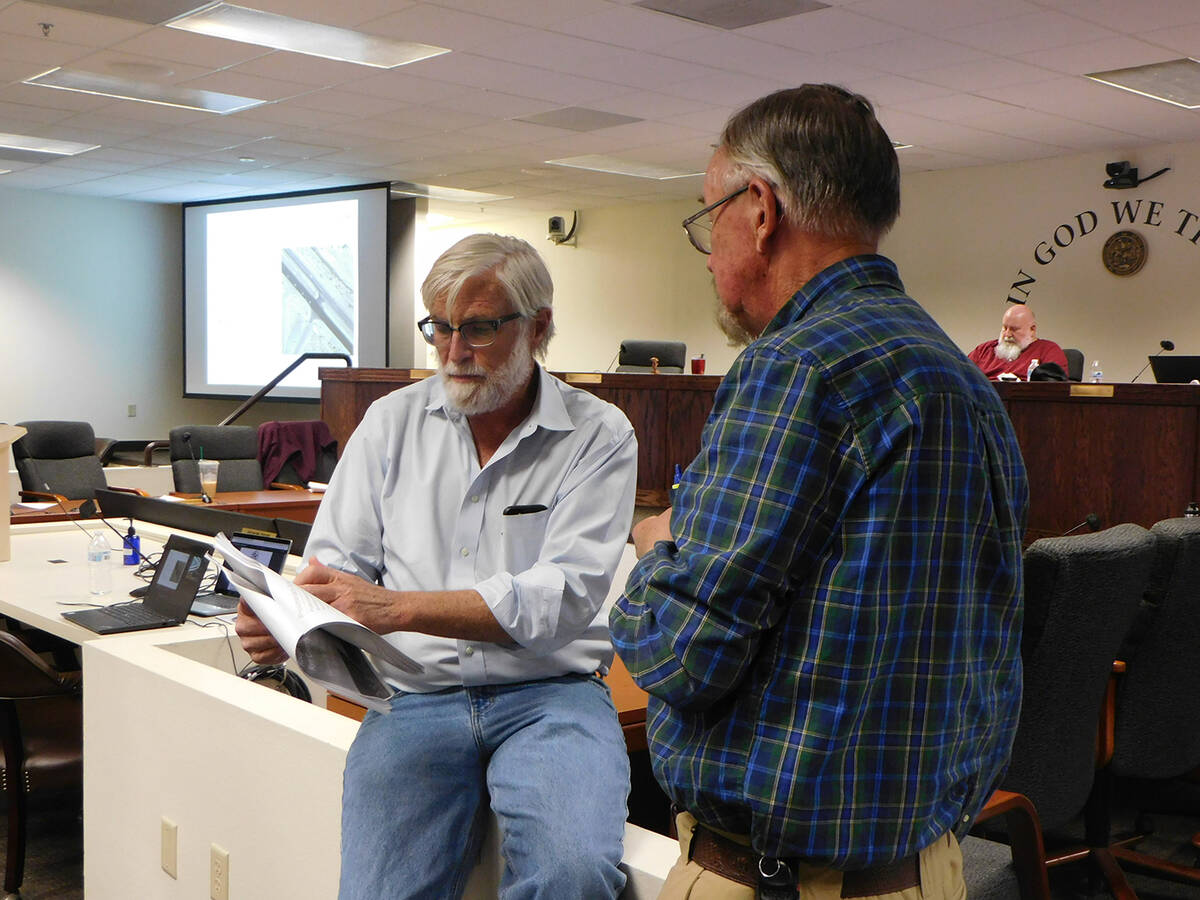 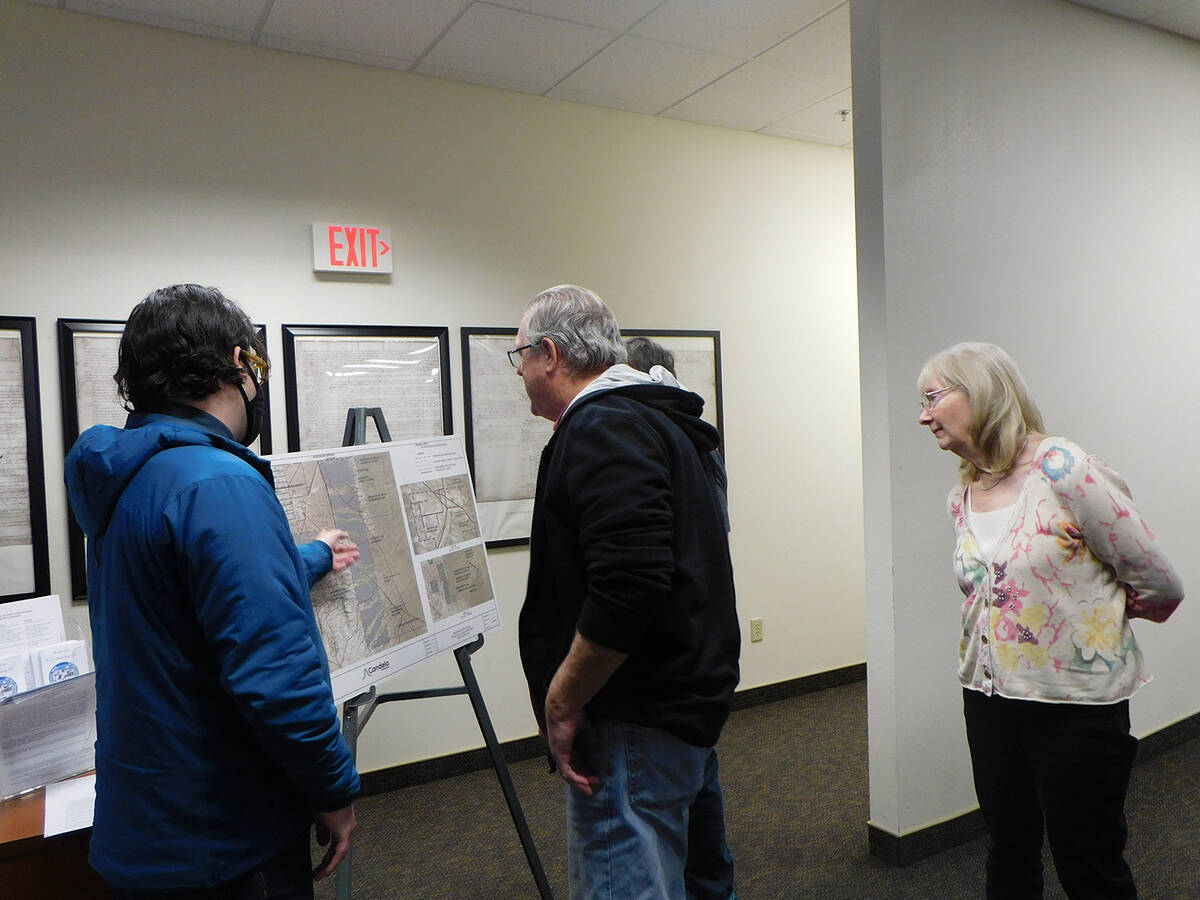 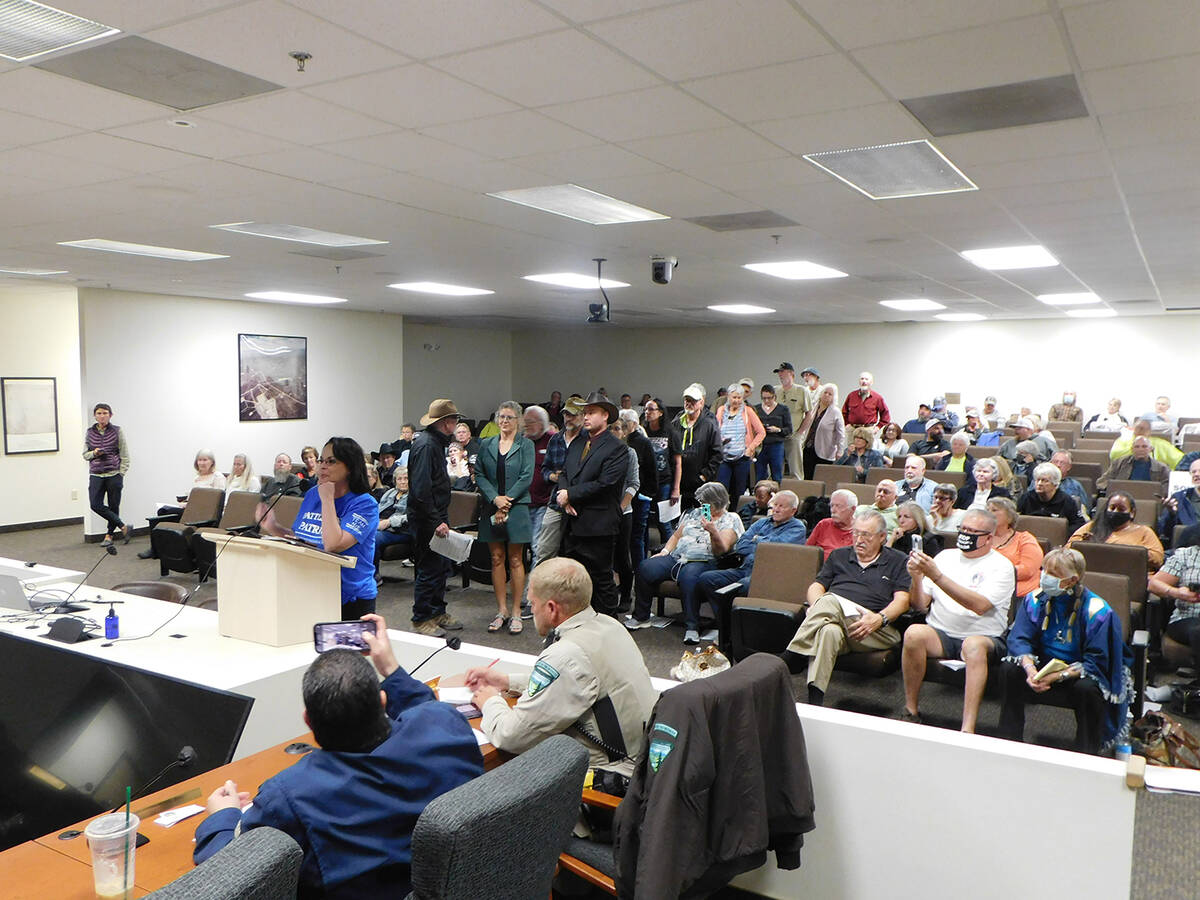 Robin Hebrock/Pahrump Valley Times A long line of residents is shown waiting their turn to speak during public comment on the Rough Hat Nye County Solar Project and not one offered words of support for the proposal.

The topic of the meeting was a highly contentious one, the Rough Hat Nye County Solar Project, which has been attracting plenty of negative public attention in the last two months as representatives from Candela Renewables, the company proposing the solar field project, strive to convince residents that a compromise between the company’s interests and the community’s concerns can be found.

The meeting kicked off with a few housekeeping items before moving into the real meat of the evening, with a second formal presentation from Candela Renewables. The company, based in San Francisco and with major investment coming from a Spanish company, Naturgy, came with a much more robust overview of its project, which took more than two full hours to present.

The lengthy 64-page presentation had many in the audience seething with irritation and accusing the company of attempting to drive out meeting attendees but as Candela representative Jim Woodruff explained, the presentation was intended not to be exhaustive but to be complete. It was aimed at answering the many and varied questions and concerns that have come about since the Rough Hat Nye County Solar Project was first discussed at the Pahrump Public Lands Advisory Committee, or PLAC, level. Though the documents contained a huge array of information meant to assuage public angst, it was clear that those in the audience that evening were not in the least bit swayed.

“The main point that we want to get across at the outset is, we are listening,” Woodruff stated as the Rough Hat Nye County Solar Project presentation item was opened. “We’ve done some talking but we’ve also spent a lot of time listening. Community voices, voices from this committee, from elected officials, from the BLM, from all the stakeholders that surround this project, are very important.

“What we have learned, particularly at these meetings, is how passionately people care about this community,” Woodruff continued, adding, “What we are proposing to do will bring change, there is no doubt about that, and change brings difficulties, it brings out emotions in people and we’ve absolutely heard that too. We’ve heard anxiety, we’ve heard animosity toward this project. We believe firmly, having done this for many years, that we can, with careful project design and input from the community and other stakeholders, we can reach our objectives, which are to build a project that meets our economic and business needs, but that we can accommodate the concerns that we are hearing from the community.”

Woodruff noted that Candela is still very early in the development process and it is highly unusual to have so much public notice so soon but this fact means the company has an advantage when it comes to public input, as it is now gleaning an abundance of opinions which can be used to shape its project during its initial stages.

Woodruff then turned the presentation over to Candela Renewables development manager Dewey Klurfield, who walked the committee and public through a bulk of the presentation, with assistance from several other Candela team members. The presentation began with a preliminary project layout which shows that of the 3,400-acre study area, only 68% of that land would actually be used for the project.

“In total, we initially presented a 3,400-acre application to the BLM. We are now around 2,319 acres for a reduction of approximately a third,” Klurfield explained.

The new preliminary project layout shows that the solar field would be cut up into individual sections, all separately fenced, allowing for existing drainage channels to remain in place and therefore, allowing continued access by recreationists through the site. Setbacks from homes in the area have all been targeted at 1,000 feet and the setback from Hafen Elementary School would be about 750 feet. It was emphasized that due to topography, residents and school children were not expected to be able to actually see the solar panels once they are installed.

To help residents get a more precise idea of what the project will look like when completed, Candela worked to have a “viewscape” created. This online mapping system includes key viewpoints that residents can click on to get an idea of how the project will look in the future. Anyone interested in reviewing the viewscape can visit candela-rh2.truescape.com.

The first section of the presentation was geared toward a project discussion touching on ownership, team experience, investors and details on just what photovoltaic, or PV, solar projects consist of. It also provided a basic project timeline which outlined the steps the company has taken and will be taking in the coming years. According to that timeline, the company hopes to have Rough Hat Nye County up and running by 2024.

Benefits to Nye County come primarily in the form of tax dollars, with an analysis performed by Ernst and Young showing that the county stands to gain an additional $2.5 million to $3.6 million in property tax revenues each year, for a total of $47 million to $66 million over the projected 30-year life of the project. Sales tax revenues were estimated at between $10 million and $14 million, the overwhelming majority of which would be paid in the first year of construction. On the jobs front, Candela said a two-year construction period would result in around 240 new local construction and installation labor jobs for Nye County and 160 new local construction jobs for the state. Once complete, the solar field would be manned by a team of eight to 10 individuals. Additional benefits could also be forthcoming as well.

Next, the company focused on the “why here?” of the situation, a question that has been posed by a whole host of those in opposition to the project. There are a variety of factors that come into play when selecting a solar field site and all must be met if a project is to be deemed viable. With the location eyed by Candela meeting all these requirements, the company felt that the lands southeast of the town would be ideal. Indeed, environmental attorney Linda Bullen, who is working with Candela, pointed out that the site selected was picked partially because of the town of Pahrump’s own Master Plan, which identifies the lands southeast of town as “better” and “best” for solar development.

Section four of the presentation concentrated on general stakeholder questions and addressed all sorts of information, from the life of the project and reclamation process to the effect it would have on property values, a local elementary school in the area and OHV and equine recreation.

An overview of the construction process itself was included, too, highlighting the company’s plans for vegetation management, water usage, dust control, site access and vehicular use.

Environmental issues such as Valley Fever, noise, lighting, glare, the view shed, fencing and security, the “heat island” effect, desert tortoise and avian populations, the specific types of soils in the area and even cultural resources were all discussed, as was information on the components of the solar panels themselves.

Following the presentation, members of the public were able to have their say and they had no bones about expressing their vehement opposition to the project. No matter what answers Candela provided, it did not seem to have any effect on the stance of meeting attendees, who repeatedly told the company that if it was indeed listening, then it should call the project a lost cause, pack up and go somewhere else.

Battle Born Patriots member Dee Mounts, who organized and hosted a protest rally against the project the previous Saturday, started off public comment by turning to the audience and asking who, after listening to the more than two-hour presentation, was still against the proposal. A sea of hands rose into the air. “So I hate to tell you, we’re not going to do it,” Mounts asserted. “This is nothing personal… This is something that you are trying to push on us… it’s a no.”

Once public comment, which included at least two dozen speakers, came to a close, the committee opened its next agenda item, regarding the committee’s recommendation to the Nye County Commission.

“I think it’s obvious that the public is against this. I don’t see any reason that we should recommend going forward with this,” PLAC vice chair Rick Tretter remarked, eliciting an eruption of applause, cheers and whistling from the crowd. “I’d like to make a motion that we recommend that this project not be supported.”

PLAC member Jim Hannah provided a second to the motion which passed with all in favor.

The Nov. 30 meeting is far from the last opportunity for the public to comment on the Rough Hat Nye County Solar Project. As Candela continues to move forward with its proposal, residents will be able to speak on the matter at both the Nye County Commission level when that body discusses a development agreement for the project and at the BLM level as that government agency undertakes the remainder of the application process. The first BLM public meeting on the project is slated to take place sometime in January.

“Candela appreciated the opportunity to give a detailed presentation to the Public Lands Advisory Committee and the public, which we believe addressed most of the questions and concerns that have been raised by the community,” a representative from Candela told the Pahrump Valley Times following the meeting. “Despite PLAC’s decision to not recommend approval of the project in its current form, Candela will continue to advance the project with the BLM and the county, seeking ways to fully address community concerns and maximize the benefits to Nye County and the town of Pahrump.”

With so much information included, an attempt to summarize the full details of the presentation would be futile. Those interested in seeing for themselves the documentation compiled by Candela Renewables can do so by visiting www.PahrumpNV.org and clicking on “Advisory Committees” under the “Government” dropdown menu. The presentation is included with item #9 of the agenda for the PLAC’s Tuesday, Nov. 30 meeting.

Candela Renewables can be reached at dewey.klurfield@candelarenewables.com.