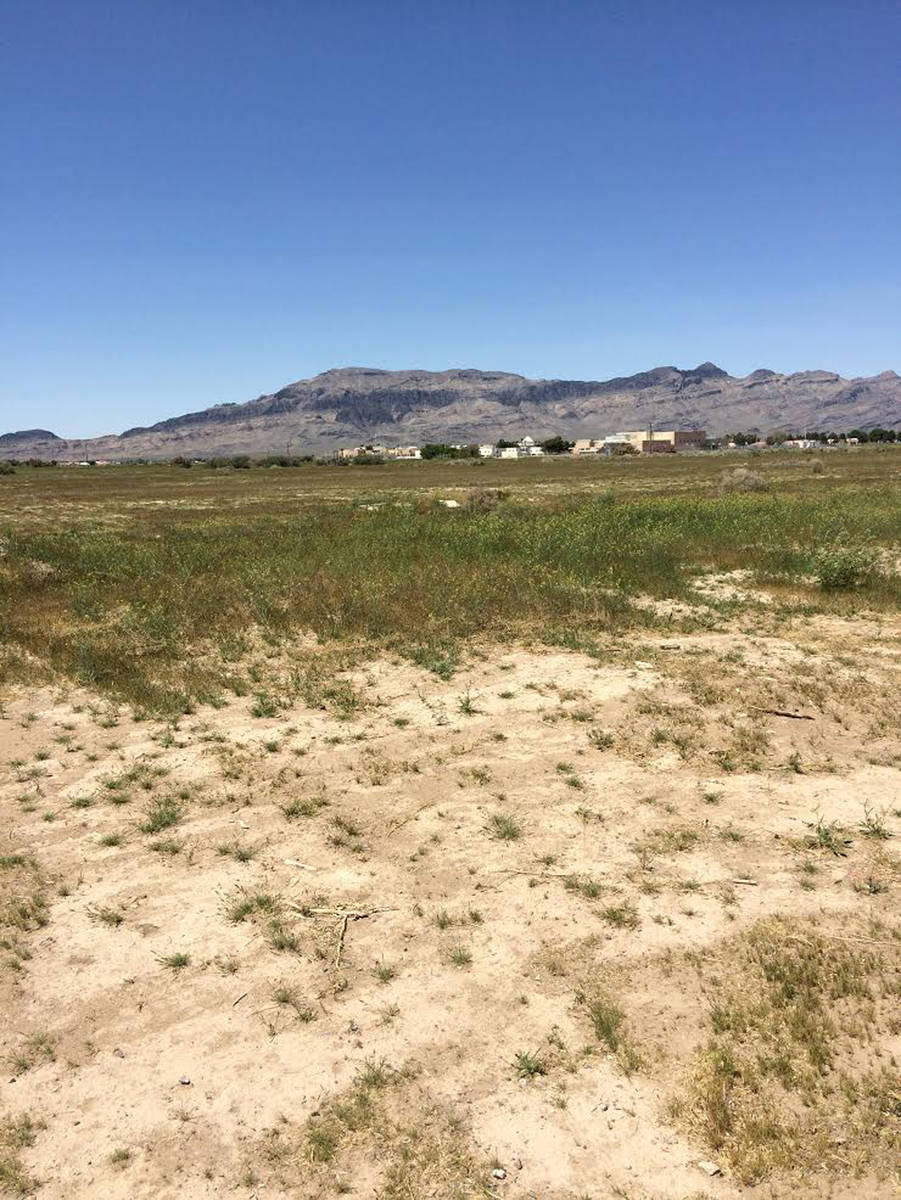 Special to the Pahrump Valley Times This photo, taken Wednesday, April 22, shows some of the land for the North Canyon Homes subdivision, a development agreement which was approved by the Nye County Commission on July 21. The land is just west of Simkins Park on Simkins Road.

After having a request for a development agreement outlining 67 houses on 16 acres of land on the north side of the Pahrump Valley denied by the Nye County Commission earlier this year, applicant Ken Murphy was back before the board on July 21 with a modified version of the agreement that ultimately met with approval.

The revised development agreement falls in line with what some commissioners had told Murphy they would prefer to see when they denied his original request in April. It calls for no more than 32 homes on the 16 acres, dropping the housing density from roughly five per acre to just two per acre. The subdivision, North Canyon Homes, is to be located on land at 290, 330, 370 and 410 E. Simkins Road, just west of Simkins Park.

Murphy is a longtime builder in the Pahrump Valley, operating Shadow Mountain Construction. The idea for the North Canyon Homes subdivision is not a new one, as Murphy had been trying to get the project started over a decade ago when the economic recession hit and put an end to his endeavor. Now that building and development have increased once again, Murphy is taking the opportunity to see his vision of a new subdivision, albeit modified, become a reality.

“My original concept was to do smaller homes, I had some two-bedroom, one-bathrooms designed, up to 1,800 square feet as the largest of the group. That would help keep the price of the homes down for people who are trying to either get started in their first home or retire, looking for something smaller than they have now,” Murphy stated. “But at this point, the board didn’t want me to do that size lots, as I understood it, so I decided to try for 20,000 square feet (lots, approximately half an acre).”

The homes would therefore be larger than he initially intended and would range from 2,000 to possibly 3,000 square feet. The development agreement comes with a five-year time limit, unlike some development agreements of the past that were approved with no definitive deadline for completion. In addition, the subdivision will have a homeowners association and Murphy said there was some discussion regarding the possibility of gating the subdivision as well.

It was noted by commissioner Leo Blundo during the meeting that because Murphy had decided to go with half-acre lots, he was not even required to obtain a development agreement with the county and could have, if he had wished to, taken a different route.

As commission chairman John Koenig put it, “… if we turn it down, Mr. Murphy can go build his homes anyway and we get nothing from that. If I have an agreement, I get something for that. I get some guarantees …”

Blundo also made sure to gauge Murphy’s willingness to help the county with the costs of improving a portion of Simkins Road, which is in poor shape where it fronts Simkins Park. Murphy said he was absolutely amenable to contributing his fair share for such improvements.

Nye County Commissioner Debra Strickland was the only board member who appeared to be staunchly against the request, just as she was when the development agreement went before the board in April. She repeated her concerns from that meeting, explaining that she did not believe 32 new parcels should be created given the already stressed water situation in the valley. She also expressed her worry that if the county were to approve the development agreement before them that day, that would set a precedent for the future that could box the commission into a corner when other developers come forward with requests for development agreements.

“I have stood anti-subdivision for a very good reason,” Strickland asserted, then made a motion to deny the development agreement.

That motion died for a lack of a second and further discussion ensued, during which commissioner Lorinda Wichman interjected to state that if Murphy was not able to build on his land, the next best use for it would likely be agriculture, which would use much more water than homes would.

Koenig added that he understood Strickland’s concerns about setting a precedent but he did not think the county’s hands would be tied completely, as they could argue that the precedent is based on lot size. As such, Koenig said, for many developers the cost versus profit when building on larger lots would not be very appealing.

Blundo made the motion to approve the development agreement with the stipulation that the lots be half an acre in size and no more than 32 homes are to be constructed. The motion passed 4-1 with Strickland the sole voice against.