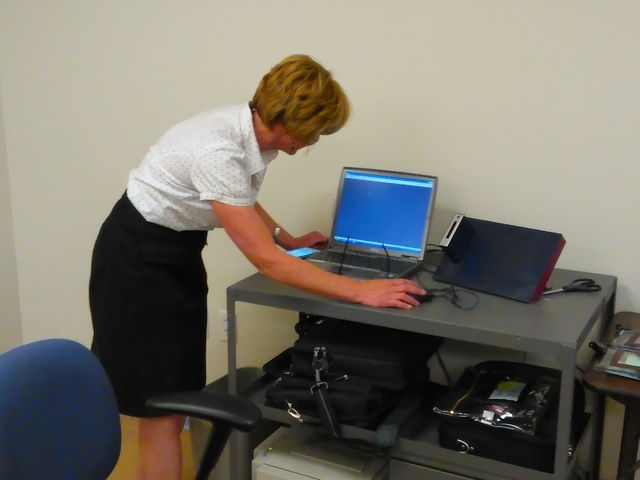 It appeared to be smooth sailing for Nye County Clerk Sandra “Sam” Merlino and her staff when voting cartridges containing the actual votes arrived from Pahrump Valley High School, Amargosa Valley and Beatty, to the clerk’s office on East Basin Road.

Unlike the last election, there were no crowds of individuals standing around wanting to know minute-to-minute updates on how the vote count was going.

Early last Tuesday evening, the halls of the courthouse were virtually empty, as only one observer, two officials from the Nevada Secretary of State’s office and a member of the media were present for the initial results.

Merlino said everything was going great until the computers she was using to count the votes inexplicably began freezing up just hours after the polls closed.

“Things went very smoothly in the beginning, but then we began experiencing problems with our computer,” she said. “Unfortunately, we have older equipment and we had some issues with the computer freezing up during the tallying of votes but we got it done.”

At present, the computers Merlino and her staff rely on to count votes are more than 12 years old.

Merlino said she and her staff may encounter the same issues on a much larger scale come the November general election if nothing changes.

“We’ve been using the same computer system since 2004,” Merlino said. “Right now, I think the chances are slim that we can upgrade it before the general election in November. I am going to check into some laptop computers that possibly the state has some extra ones that we can use. The upgrade we had back in 2004, came from federal funding but that has since gone away. I have three laptops and had problems with all of them tonight.”

Nye County Commissioner Butch Borasky said he’s well aware of the issues the clerk’s office is facing and working to remedy the problem.

“The problem is with the scrolls that tie into the computers and we are already in the process of digging some money out of whatever account we need to take care of that in the future,” he said.

Though Borasky is not certain exactly how much it would cost to upgrade the system, he’d like to fix the problem before November.

“I don’t know if we will be able to have them in for the general election but I’ll have to double-check,” he said. “I have made the county manager aware of that and she said there should be money in the capital account to take care of that. I’ll see whether we can make it a priority and get it done by the general election.”

Commissioner Dan Schinhofen said Tuesday that the state should pay for any expenses associated with the upgrade of computers.

“They are going to have to be updated,” he said. “We are going to ask the state to pay for it and then we are looking at our next couple of budgets to try to find money to upgrade them. I don’t know about all of the particular problems but the state has mandated that they have to be new computers in two years and that’s what we are trying to do.”

County commissioners discussed having the state pay for the upgrades during Tuesday’s meeting. They will take the issue up again during a future commission meeting.