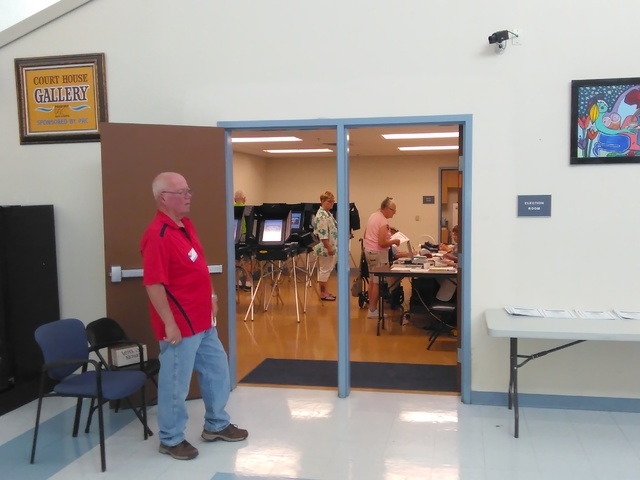 With the primary election looming Tuesday, county officials are concerned about the low turnout for early voting.

Those poor turnout numbers continue as early voting comes to a close tonight at 6 p.m. at the courthouse in Pahrump.

Primary voting is Tuesday starting at 7 a.m. with polls closing at 7 p.m.

Nye County Clerk Sandra “Sam” Merlino said as of late Thursday morning, her office counted a total of 2,296 ballots for the two-week period.

In the 2014 primary early voting, 3,465 votes were cast. That race included the sheriff’s race and a governor’s race.

Merlino noted the lack of local races may be the reason for the light turnout.

The county commission’s district I and III races will be decided in the primary, while the winner of the District II race, all Republicans, will square off against former town board chairman Harley Kulkin, the sole Democrat.

“Other than our congressional, Senate and Assembly races, we only have pretty much the three commission races and they are Republican,” she said. “You figure half of the population might be out voting and the other half may decide to stay home just because there’s not a lot on the ballot.”

Nye County had 25,522 active registered voters by the close of registration for the primary on May 24, according to the state. Republicans account for 11,897 voters, while Democrats have 7,287 registered. The remainder are independents or nonpartisan voters.

Conversely, Merlino said she expects a larger number of voters showing up at the polls for the national races in November.

“We expect a huge turnout in the presidential race because we always do see that,” she said. “But with early voting, it’s unfortunate, especially since a couple of those districts will be elected in the primary or at least the highest vote-getter is the only nominee. It’s unfortunate that it will be decided with a very poor turnout.”

Merlino also said there were no problems with voters as they cast their respective ballots during the early voting period.

“As far as the action of casting their ballots, everything is going fine and we haven’t had any problems. At all,” she said. “It’s just that it’s really quiet. It’s almost too quiet. We would much rather have it busy.”

Merlino expects Tuesday’s primary election will go off without a hitch, as far as she can see at present.

She did say that Pahrump Valley High School experienced a slight problem after a water line broke and flooded the gymnasium recently.

“It didn’t damage anything but it got flooded,” she said. “They since dried it out so there shouldn’t be any problems. I know they are still working on it to get things ready. Other than that, everything will be the same.”

The three main races for County Commission districts are on the Republican side.

District I incumbent commissioner Lorinda Wichman of Round Mountain is trying to fend off challenges from tax accountant Scott Mattox of Amargosa Valley and Pahrump resident Earl Jones.

The winner of both the races will go on to the November ballot unopposed because no Democrat or third-party candidate filed for the seat.

However, the winner of the District II race will face a Democratic challenger in November. The Republican candidates on the primary ballot are Ray T. Grant, John Koenig, Amy Riches, David Lancaster and Sal Ledesma. The seat is being left open by commissioner Frank Carbone, who decided not to seek a second term.

Other races that could drive county voters to the polls on Tuesday is the Republican contest for state Assembly District 36 between challenger Tina Trenner and incumbent James Oscarson. In the Nevada Fourth Congressional District, a crowded Democratic field is on the ballot, with the winner likely to face current U.S. Rep. Cresent Hardy in November.