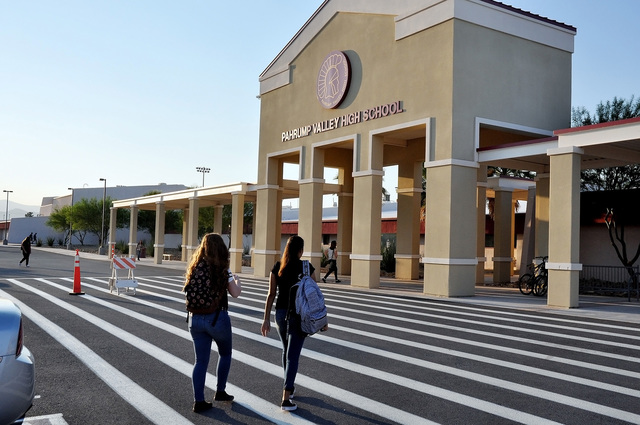 A report released by the Nevada Department of Education said that the Nye County School District had a preliminary four-year graduation rate of 70.1 percent for the class of 2016, or students who were freshmen during the 2012-13 school year. Horace Langford Jr./Pahrump Valley Times

A report released by the Nevada Department of Education said that the county had a preliminary four-year graduation rate of 70.1 percent for the class of 2016, or students who were freshmen during the 2012-13 school year. That is just less than a one percent increase from the 69.2 percent mark reported for 2015.

Since the date is just preliminary at this point, Nye County School District Superintendent Dale Norton wanted to reserve specific comment on the graduation rate until the official number is released later in the year.

Although the increase was modest from 2015 to 2016, Norton said steps are being taken to ensure that number continues an upward trend.

Despite the slight gain, the county’s rate is still below the state average of 72.62, which rose from 70.9 in 2015, and Norton has a plan in place to catch up and then exceed that number.

Norton listed student learning with failure not being an option, collaboration and curriculum and pre-K-12 assessments as pieces of the district’s blueprint to raise graduation rates.