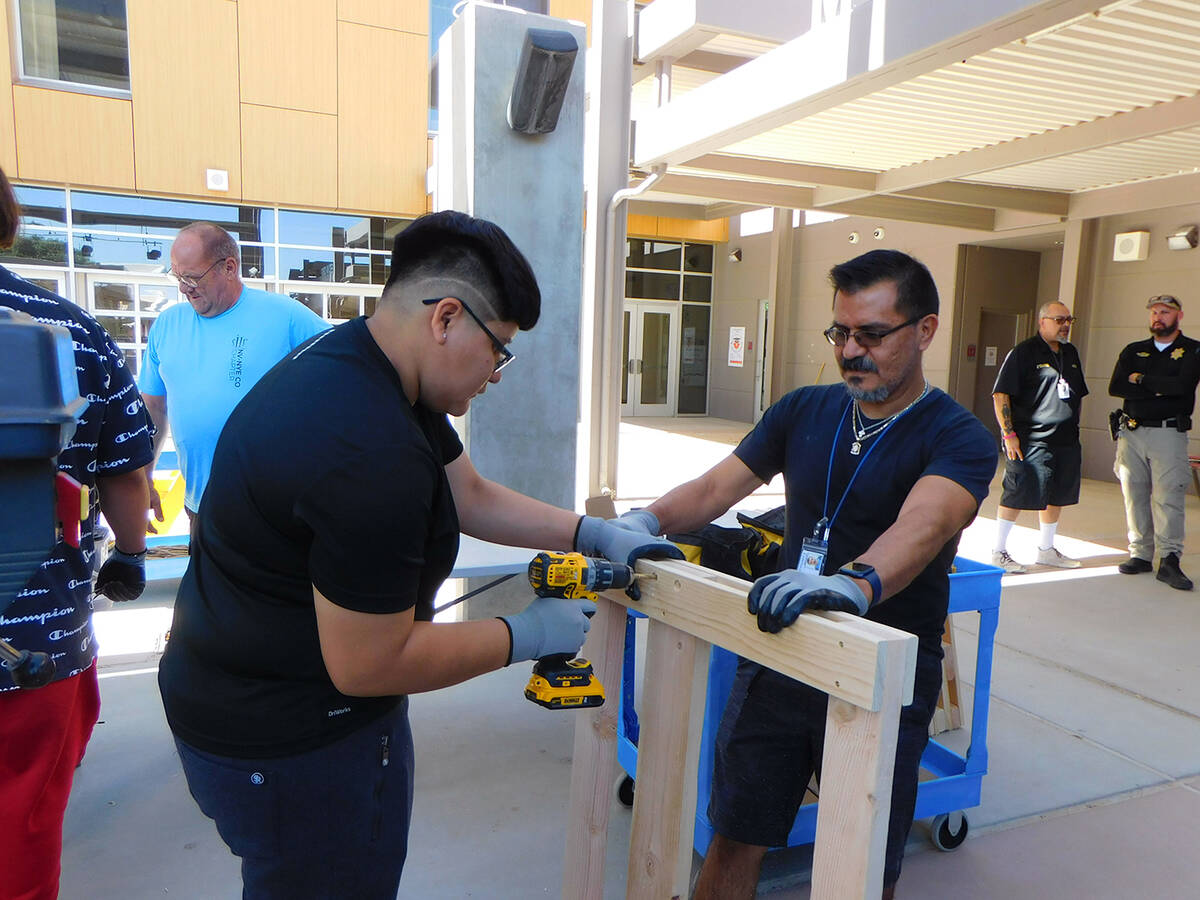 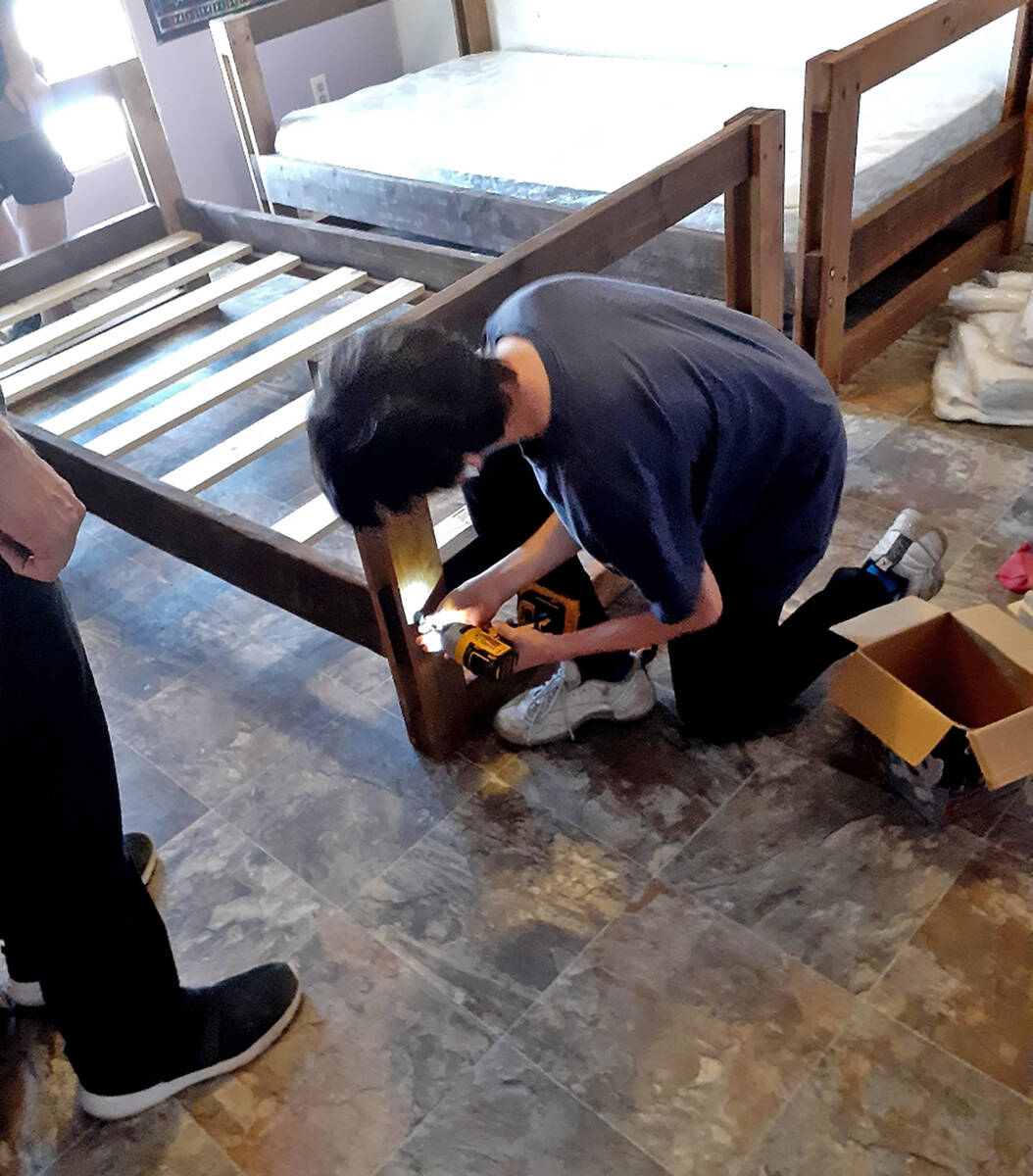 Special to the Pahrump Valley Times A local youth in the Step Program, sponsored by Nye County Juvenile Probation, is seen assembling a new bed inside a Pahrump family's home on Thursday, June 16. 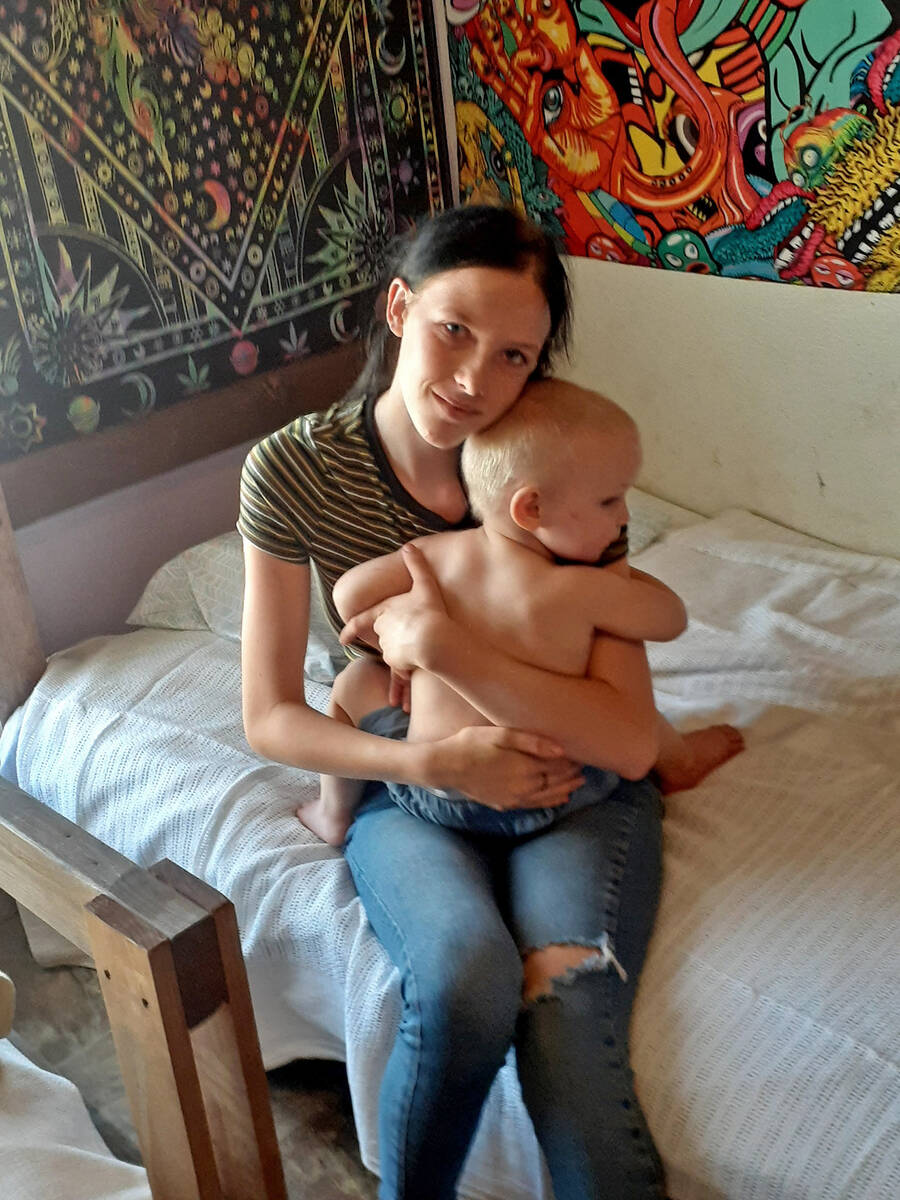 Special to the Pahrump Valley Times Sleep in Heavenly Peace provides new beds for children who do not have one of their own, giving them their own safe place to go to sleep every night. 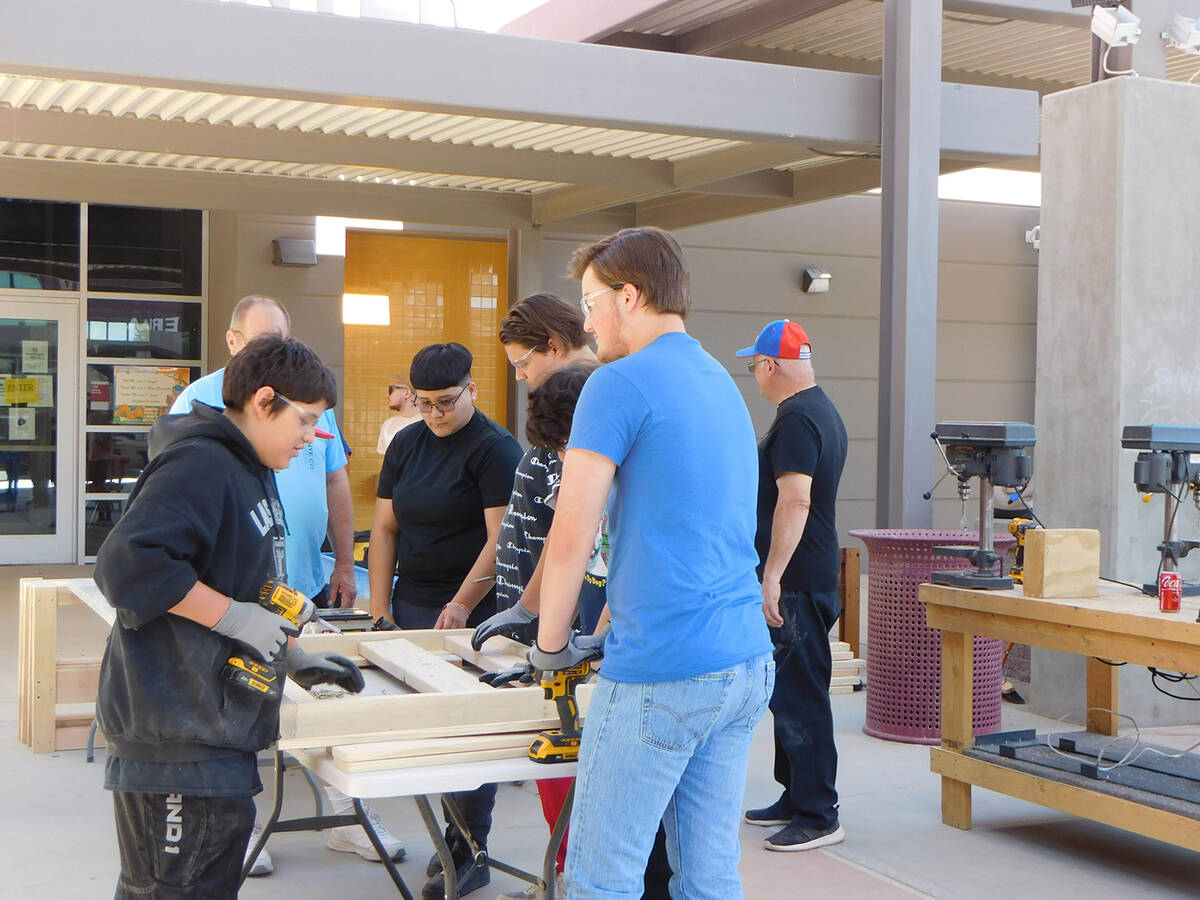 Robin Hebrock/Pahrump Valley Times Nye County Sleep in Heavenly Peace has started a new partnership with Nye County Juvenile Probation that gives youth the opportunity to learn to construction skills as well as the importance of giving back to their communities. 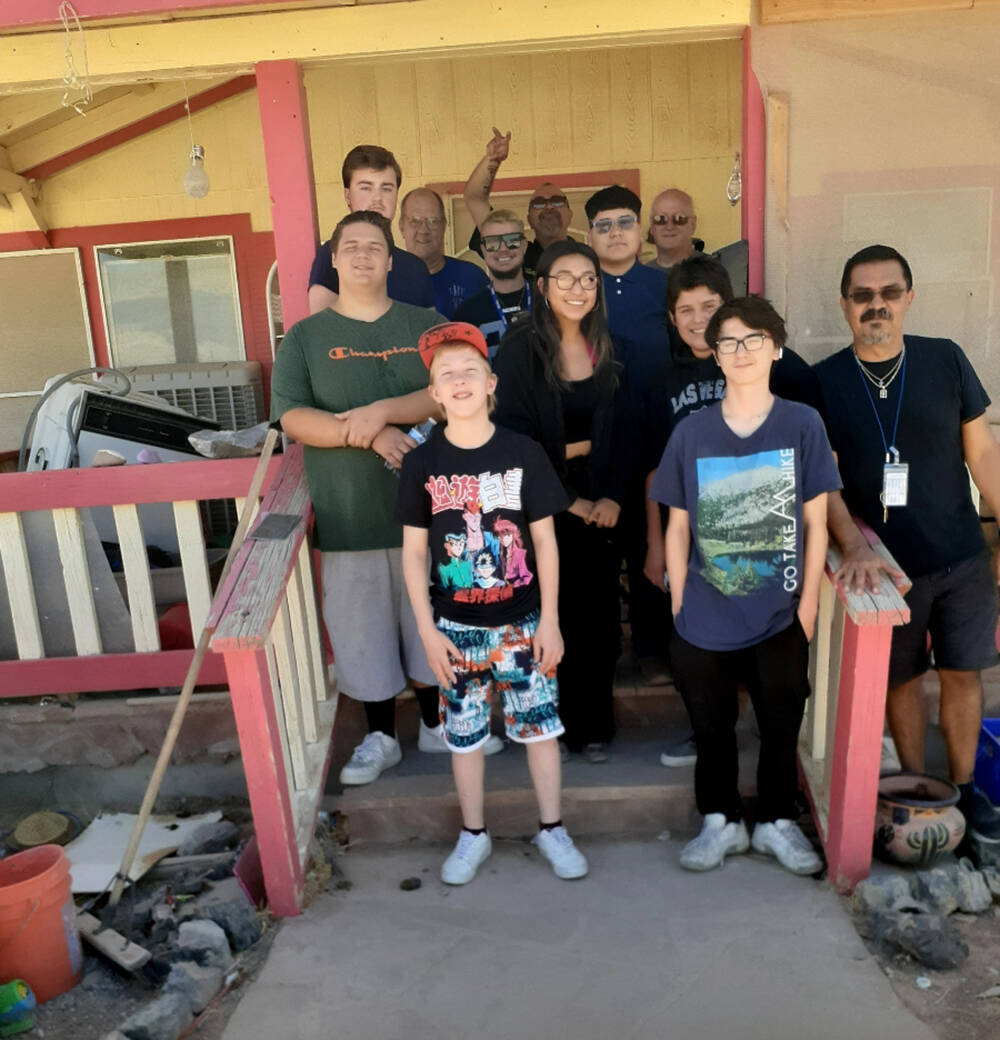 Special to the Pahrump Valley Times Members of Nye County Juvenile Probation and youth involved in the Step Program are pictured posing on the front porch of a local home, where they had just delivered new beds for the kids that live there. 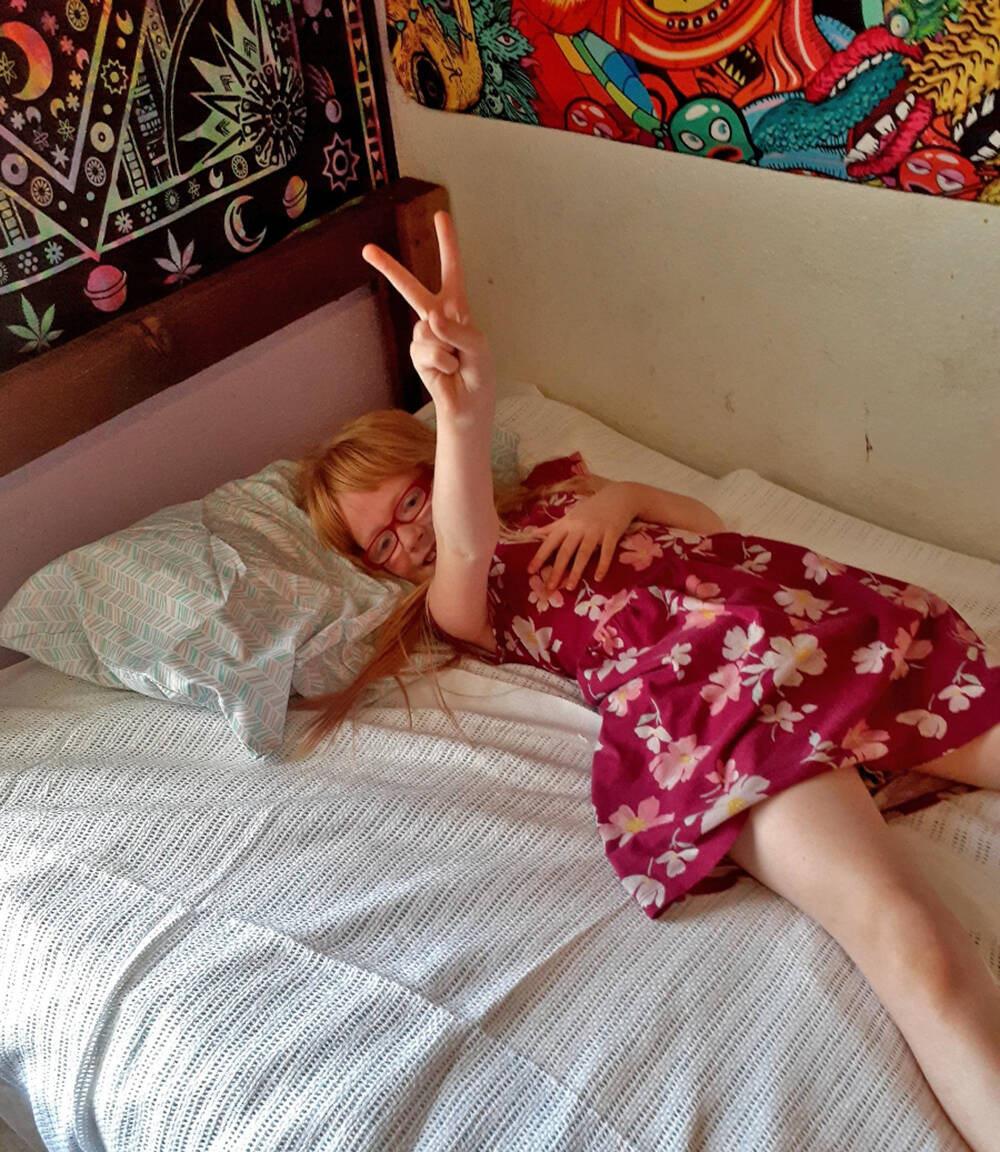 Special to the Pahrump Valley Times A local youngster smiles and gives the "peace" sign from the comfort of her own new bed, complete with mattress and linens. 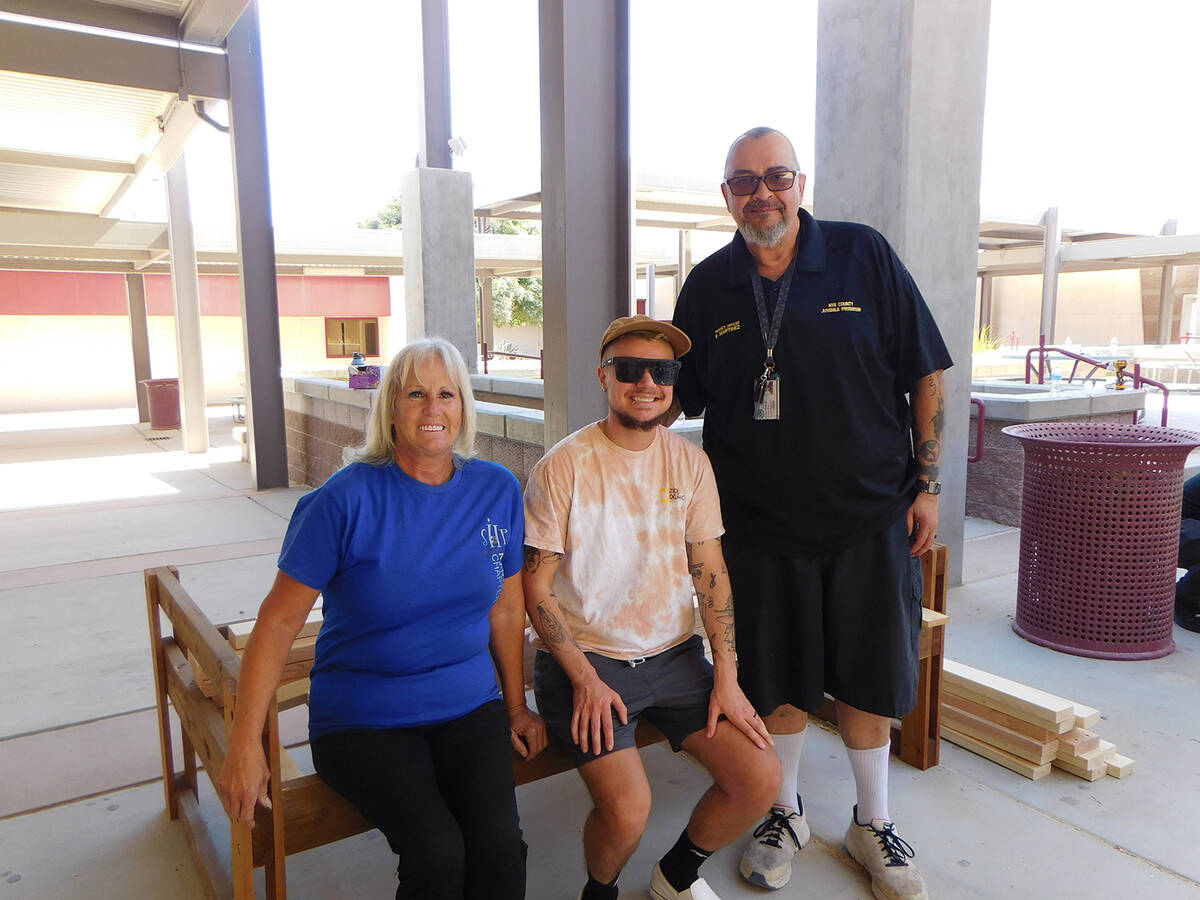 For one group of local youth, that opportunity came in the form of gaining some construction skills while simultaneously learning the value of giving back to the community.

Through a brand new partnership between Nye County Juvenile Probation and the Nye County Chapter of Sleep in Heavenly Peace, local students who had found themselves in a bit of trouble were able to turn their struggles into something quite positive. With power tools and construction items at hand, these young men and women were given the chance to help prepare the materials necessary for constructing new beds for children who do not have a bed of their own.

As Nye County Sleep in Heavenly Peace President Carmen Murzyn remarked, it was win-win for both her organization and the youth involved and she is looking forward to many more years of partnership with juvenile probation in the future.

Last week, the Pahrump Valley Times took a trip over to Pahrump Valley High School, where officials with juvenile probation had gathered with the teens for a morning of sawing and drilling. The youth involved are all in what is called the Step Program.

“The Step Program is the summer education program that we do through juvenile probation,” Nye County Juvenile Probation Officer Robert Martinez explained, noting that there are various reasons for the teens’ involvement in that program. “Most of the time it’s for truancy issues,” he detailed. “I’m the truancy officer working with the schools so this is just our way to try to get them back on track.”

Cal Braner, who oversees the teen outreach program for Nye County Juvenile Probation, explained that he had been searching for an activity for the youth in the Step Program that would be both positive and production when he had happened upon Sleep in Heavenly Peace.

“We were looking for a community service learning project and it needed to be something that would be impactful and really give back to the community, to give the youth the opportunity to serve others. So we heard about the amazing people at Sleep in Heavenly Peace and we got ahold of them to let them know we had some youth that we would love to bring over to have them build beds!” Braner stated.

Already at its mid-point in its third week, the project has yielded great results, with Braner detailing, “Yesterday, we sent prepared materials back to their warehouse to be stained and put together, so they already have enough material for eight new beds. And the youth have learned all sorts of skills.”

Murzyn added that the group was actually planning to do a delivery of three single beds for a family in Pahrump the following afternoon.

“And when it comes time for our big bed-build event in September, I can call up these kids and have them come down to be in charge of our stations and supervise, because now they know how to do it and they can teach other people,” Murzyn said.

Sleep in Heavenly Peace member Steve Filarowski noted with a chuckle, “And they are so receptive, even more so than some of the adults we work with!” In a more serious vein, he added, “They are so open-minded, they follow direction and for the most part, they really listen.”

“I’ll tell you, these kids do an amazing job,” Murzyn’s husband Jim remarked. “They are so conscientious about what they are doing and they seem to be enjoying it too.”

Sleep in Heavenly Peace is a nationwide nonprofit with chapters all over the country. Each is volunteer-led and operated, with the goal of providing new beds to families in need so that no child has to sleep on a couch, air mattress or even worse, the floor.

For more information on the Nye County chapter contact Murzyn at Carmen.Murzyn@SHPBeds.org or call 775-910-8921.