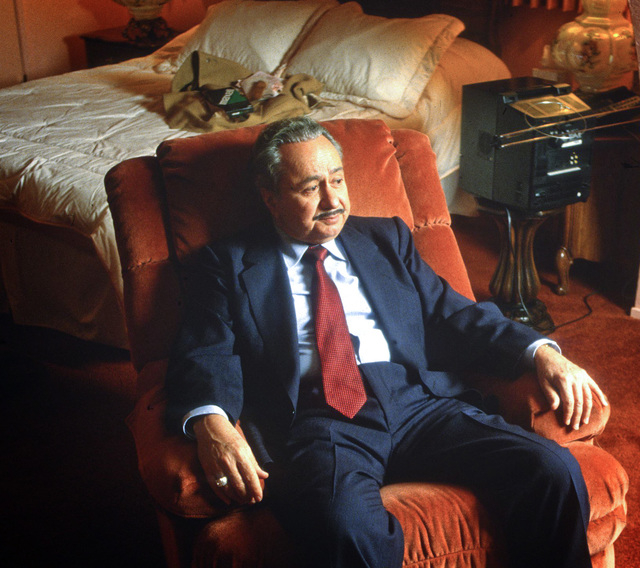 About two miles north of Beatty on the west side of Highway 95 is the site of a brothel with a colorful past. Though Angel’s Ladies closed in 2014, there had been a brothel at that site longer than at any other location in Nye County history.

The site, really a small ranch, was apparently originally owned by a member the Terrell family, and a home was located there.

Along in the mid-1950s, it was decided the place would make a good brothel. In his book “Breaks, Brains, and Balls: The Story of Nevada’s Fabulous Mustang Ranch,” Joe Conforte states that two Nye County commissioners, both Republicans, apparently owned the ranch and were in partnership with another person to operate a brothel at the site.

But things weren’t going well. They weren’t making money and were in danger of losing their investment. The two commissioners were Solan Terrell, later Justice of the Peace in Tonopah, and Steve Balliet. Conforte notes the third commissioner, Nick Banovich, was not an owner but was cooperative.

According to Conforte, Nye County District Attorney Bill Beko was the legal and political powerhouse in Nye County at that time—more so, really, than the Nye County commissioners. Beko, Conforte contends, was friends with Bill Martin, a.k.a. Bill Apfeld, owner of the Shamrock brothel at Lathrop Wells in the Amargosa Valley.

A highly reliable local source reports Martin had close ties to the mafia and had been sent to the Nye County desert to “cool off.”

Though living in Nye County, Martin held onto many of his mafia ways. He was aware that a brothel might open north of Beatty and didn’t want the competition. His friend Beko did what he could legally to hinder the new joint’s success. As Conforte writes, Martin “was Beko’s boy” and Beko “was running the show.” He said Beko controlled “who could open up a place and who could not open up.” Conforte says the commissioners knew that Beko was “stomping all over them” when it came to their brothel, but couldn’t seem to do anything about it.

(Let me add here that for the past 55 years I have had and still hold the highest admiration for Bill Beko. I probably would not have made it through college without his help. He understood power and its use far better than most leaders do.)

Growing increasingly concerned about losing their investment, the owners talked to Joe Conforte. He owned brothels in northern Nevada and had recently closed the one he owned at Montgomery Pass on Highway 6 west of Tonopah. Conforte had the reputation of being smart and a tough opponent in a fight, and he agreed to assist the two commissioners in their conflict with Bill Martin.

Conforte played his hand brilliantly. He understood that Beko was the power in the county, but it was the commissioners who wrote the laws. With all three commissioners on his side, Conforte realized he was in a strong position when it came to operating a brothel north of Beatty, irrespective of what Bill Martin wanted.

In early May of 1958, the Nye County Commission voted to make three and only three brothels in Nye County legal, to become effective May 16, 1958. This was the first time houses of prostitution in any county in Nevada had been made explicitly legal. The three brothels were the proposed brothel located north of Beatty, referred to as the Cottonwood Club (soon to be the Jolly Dolly); the Ash Meadows Lodge, located in Ash Meadows at the south end of the Amargosa Valley; and the Buckeye Bar, located on the eastern outskirts of Tonopah.

The next day, Conforte wrote, the headlines on the Las Vegas Sun were bigger “than when the atomic bomb was dropped: ‘Whorehouses Declared Legal in Nye County’” (p. 166).

The action was passed unanimously by Nye County’s Commission Chair Solan Terrell and commissioners Steve Balliet and Nick Banovich. The action provided that the penalty for anyone practicing prostitution any place in the county other than the three designated establishments would be a fine of $500 or imprisonment in the county jail for six months, or both.

The action also called for a $200 per month fee for each of the three establishments, with funds to be deposited in the Nye County General Fund.

As would be expected, passage of the ordinance was opposed by Nye County District Attorney William P. Beko. He contended that under Nevada law it was the commissioners’ responsibility to abate a nuisance. He said the practice of prostitution is a nuisance per se, and forbidding it is beyond the scope of the Nye County Commissioners.

Beko stated that the commission giving permission to operate a nuisance in one area and then turning around and prohibiting it in other areas constitutes special legislation prohibited by the state Constitution.

Commissioner Steve Balliet told the Tonopah Times-Bonanza that commission members believed their action was the most effective way to bring prostitution in the county under the direct supervision of county authorities. He pointed out prostitution had always existed throughout the state and he was quoted in the Nevada Review Journal (May 13, 1958) as saying, “The most sensible approach is to license a limited number of operations and obtain revenue from them for the county.”

Interestingly, it was pointed out in the press that one of Commissioner Balliet’s employees had a connection with the Cottonwood Club and the property on which it was located was recorded in the name of Donald W. Terrell, brother of Solan Terrell, the commission chairman. Balliet denied that these connections had any influence on the ordinance’s passage (Nevada State Journal, May 13, 1958).

But Bill Martin was not finished.

The new ordinance had to have a second reading before it became law. Martin’s Lathrop Wells brothel had been closed, but the new Beatty joint had not yet opened. Conforte had stationed a guard at the Beatty place. One day in mid-morning, a Molotov cocktail hit the front door and it began to burn. The guard fired his shotgun and scared off the thrower, then put out the fire with no serious damage.

Conforte knew Martin was behind the fire and called him the next day. He said, “Okay, Bill. Now you’re not dealing with punks anymore. In fact, I don’t even want you to answer me back. All I’m telling you is, I know you’re the one who did it. You want to play that kind of game? Go ahead. You’ve got more to lose than I do. That shit is going to stop. I’ve got nothing else to say.”

Conforte then had a meeting with Beko. According to Conforte, it was a “very, very easy” meeting, more about what wasn’t said than what was said. “All of a sudden now, it’s okay for me to open up, where before they were closing it every time we opened it.” Beko said,

“Okay, make sure you have the right people running it.” In the end, the entire matter showed how smart Conforte was in solving a tough problem and how brilliant Beko was in knowing the limits of his power. Knowing one’s limits, after all, is the real secret of power.

Conforte opened the brothel north of Beatty and named it the Jolly Dolly. He would stay there for a week at a time, then return north, but he soon tired of the venture; it was too far from Reno. He sold his interest for $5,000 and left. As we shall see, the Jolly Dolly brothel later enjoyed existence under the names Vickie’s Star Ranch, Fran’s Star Ranch, and Angel’s Ladies.

Conforte was the owner of several brothels in northern Nevada and he came under attack from Bill Raggio. Raggio was district attorney for a northern Nevada county where Conforte owned brothels. Raggio later became a powerful Nevada state senator. Raggio conducted a multi-decade legal vendetta against Conforte that was an important factor in eventually forcing Conforte to leave the country and take up long-term residence in Brazil, where he currently resides.

Reliable sources tell me that Raggio’s enmity toward Conforte was based on Conforte’s unwanted competition with Raggio’s mother, who operated a prostitution service out of a hotel in Reno.

Parenthetically, it is worth noting that Bill Martin’s alleged bombing of Conforte’s planned brothel outside Beatty presages his alleged bombing of the Chicken Ranch in Pahrump some years later. And, given Joe Conforte’s contention that Bill Beko was aiding Bill Martin in impeding the opening of Conforte’s Jolly Dolly (earlier, Cottonwood Club) to prevent competition with Martin’s Lathrop Wells joint, it makes one wonder if the same forces might have been behind the closing of the Willow Tree and Red Rooster in Beatty.