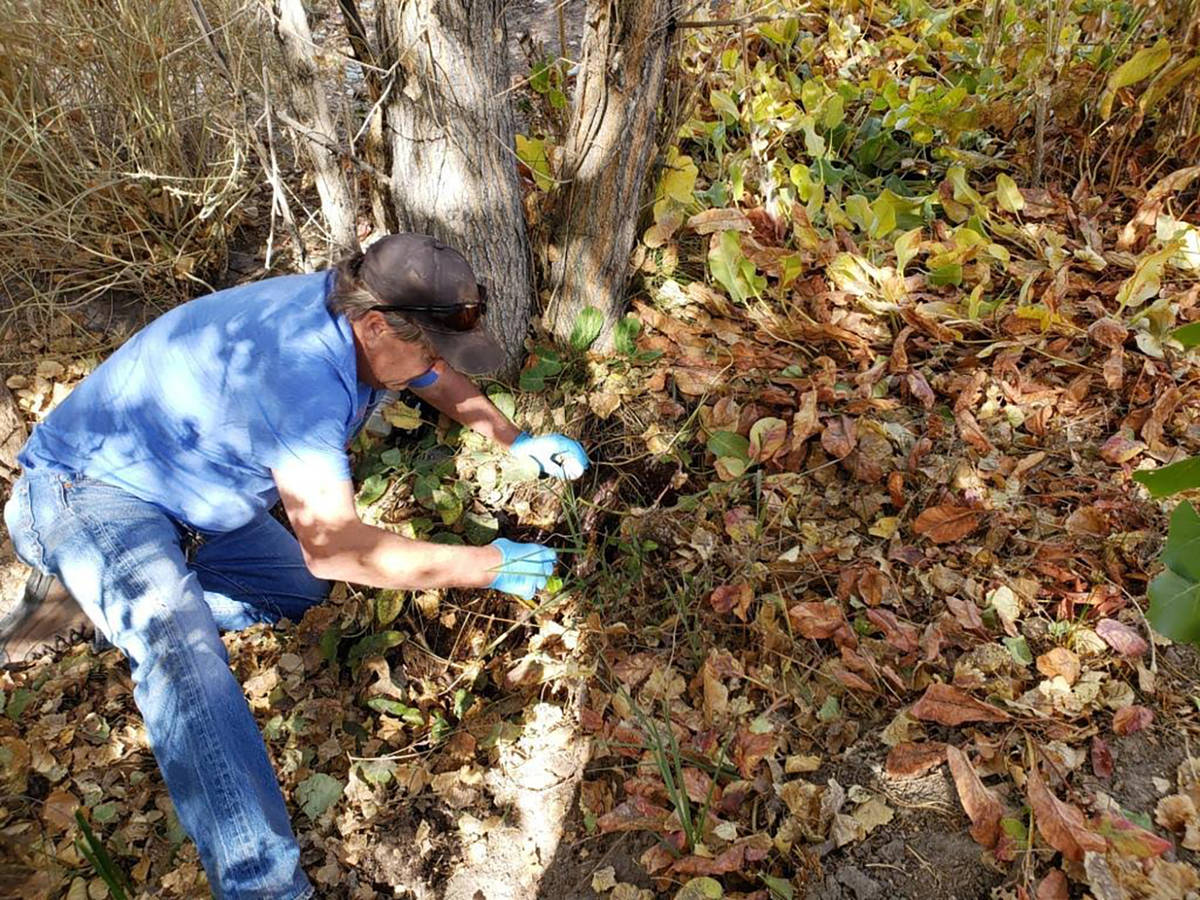 Special to the Pahrump Valley Times Nye County Geoscientist John Klenke is shown collecting a water sample at Revert Springs as part of the 2019 Tritium Sampling and Monitoring Program. 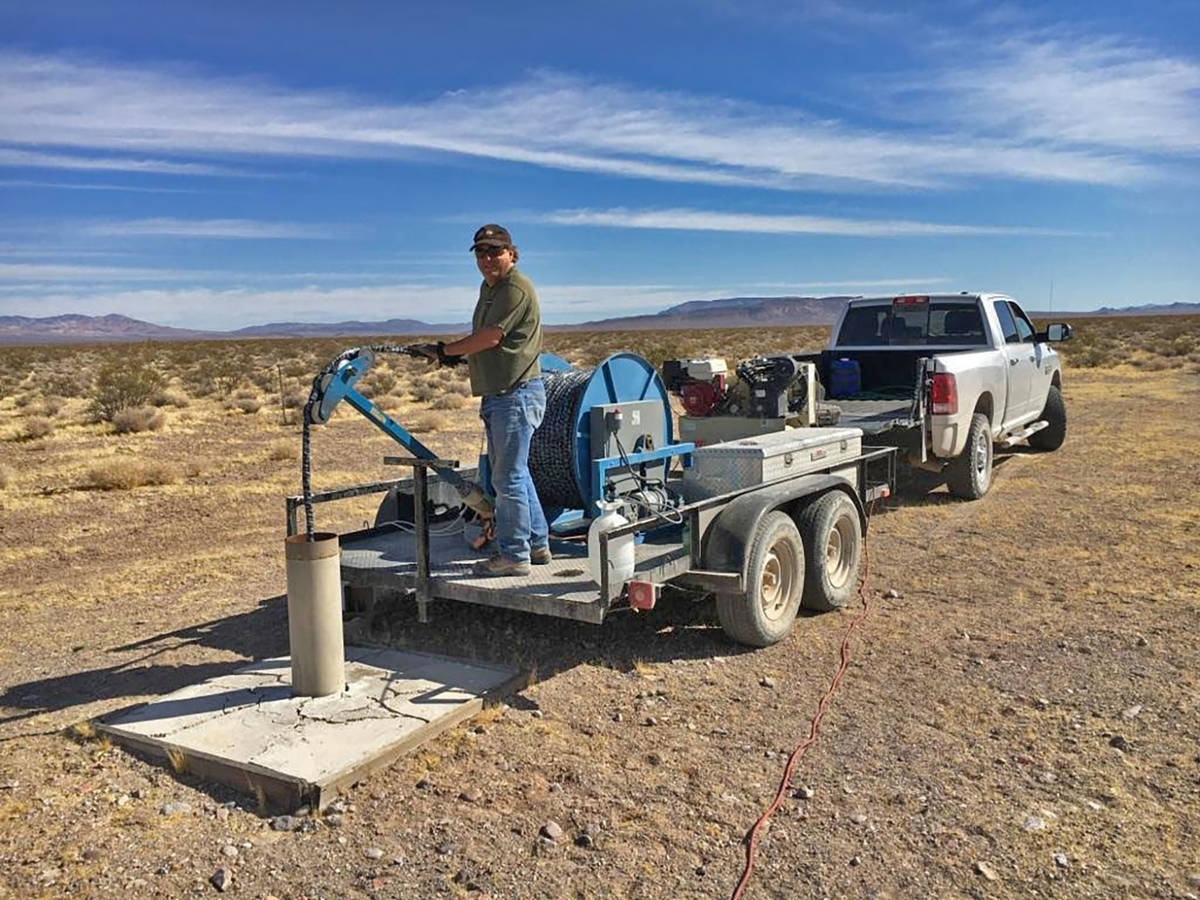 Special to the Pahrump Valley Times Water sampling over the last five years has shown there are no detectable levels of the radioactive isotope tritium in the groundwater down-gradient of the Nevada National Security Site. 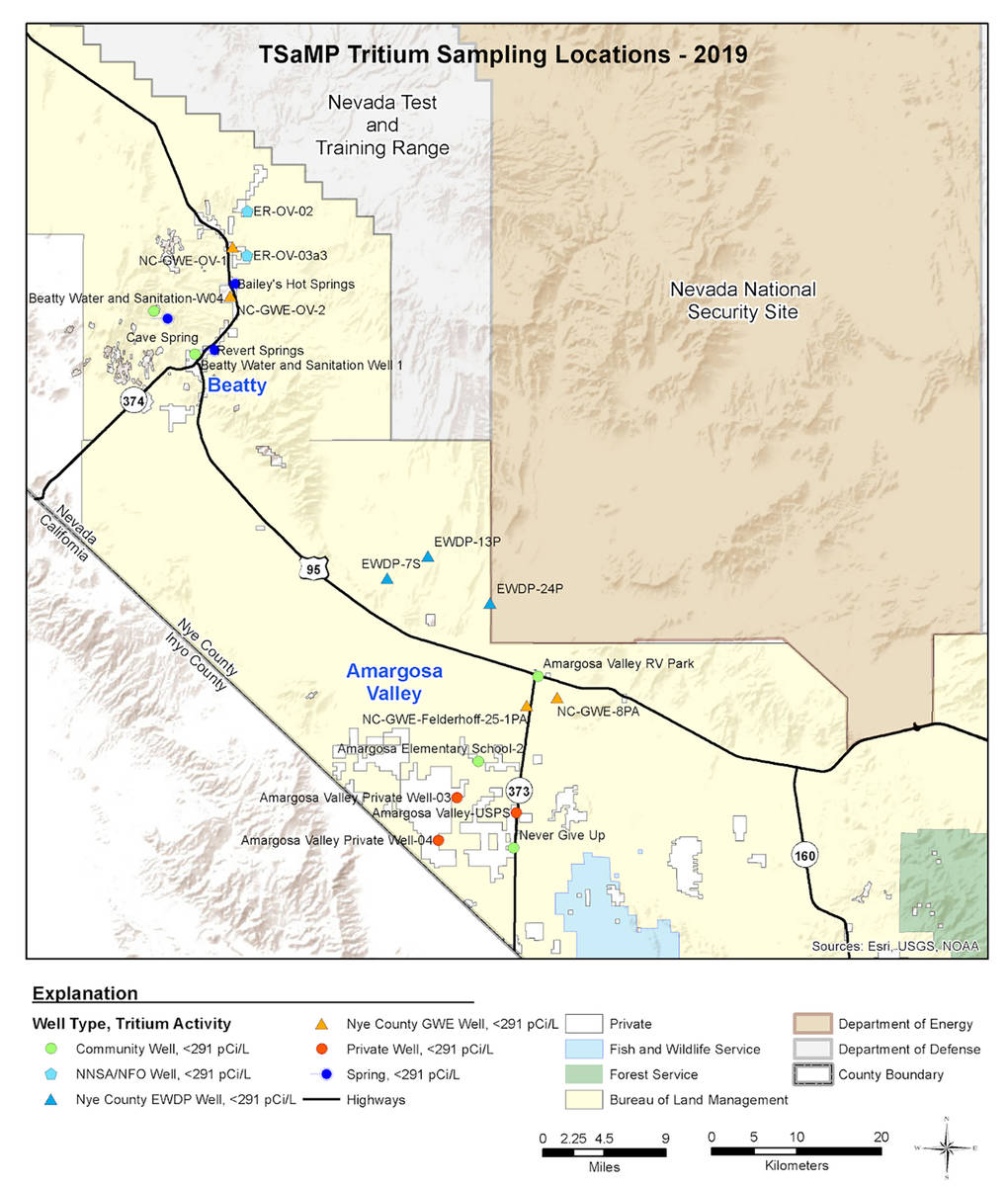 Special to the Pahrump Valley Times This map, provided by Nye County Geoscientist John Klenke, shows the locations for tritium sampling in 2019.

For the fifth consecutive year, the Nye County Tritium Sampling and Monitoring Program, better known simply as TSaMP, has shown there are no detectable levels of the radioactive isotope tritium in the groundwater down-gradient of the Nevada National Security Site.

Formerly known as the Nevada Test Site, the Nevada National Security Site was the location of decades of nuclear experiments which, though they have since ceased, have left behind a legacy that harbors the potential for endangering people and the environment. Each nuclear explosion carried out at the test site generated radionuclides that could contaminate soil and water. While it is fairly easy to erect fences and keep people off the contaminated land, water is not as easily contained and concerns regarding the potential of contamination in the public’s groundwater supply have prompted several monitoring programs, including Nye County’s TSaMP.

The TSaMP is funded by a seven-year grant from the Department of Energy Environmental Management Office. Nye County first received that grant funding in 2015 and has continued to conduct its monitoring program each year since, with sampling performed in the final months of each year and the results of that sampling published the following year.

For 2019, Nye County sampled 17 wells and three springs between October 15 and December 18, 2019, according to Nye County Nuclear Waste Repository Office Geoscientists John Klenke. This round of sampling included 10 “core” sites, comprised of nine wells and one spring which have been sampled every year since the start of the TSaMP, along with 10 additional locations, including eight wells and two springs, locations that change on an annual basis.

“The 2019 samples were taken down-gradient of the NNSS in the vicinity of Beatty and Amargosa,” Klenke detailed. “Four duplicate samples and three blank ones were also taken to meet quality assurance requirements. Sample locations were selected based on groundwater flow paths off of the NNSS, proximity of wells to down-gradient communities, and recommendations provided by Community Environmental Monitors and Nye County citizens.”

Klenke explained that Community Environmental Monitors, or CEMs, are trained local citizens who manage the Community Environmental Monitoring Program monitoring stations in communities around the Nevada National Security Site. “The CEMP does air sampling, as well as a limited amount of tritium sampling off of the NNSS,” Klenke said. “Additionally, Nye County does corroborative sampling with the Desert Research Institute on one well each year to verify test results and collect additional samples for other types of analysis.”

Nuclear explosions eject many different kinds of radionuclides, so that may leave some wondering, why is tritium the chemical substance being sampled for? The answer is simple: tritium is not only one of the most abundant radionuclides produced by underground nuclear testing, it is also a constituent of the water molecule itself, making it highly mobile. That means that tritium acts as something of an alarm bell for scientists. If tritium is present in the water, there is the possibility that other, more dangerous radionuclides could be moving in the water as well. The lack of tritium in the sampling program’s results indicates a lack of movement by those more menacing chemicals.

“The test results showed that all 20 TSaMP samples collected in 2019 had undetectable levels of tritium,” Klenke concluded.