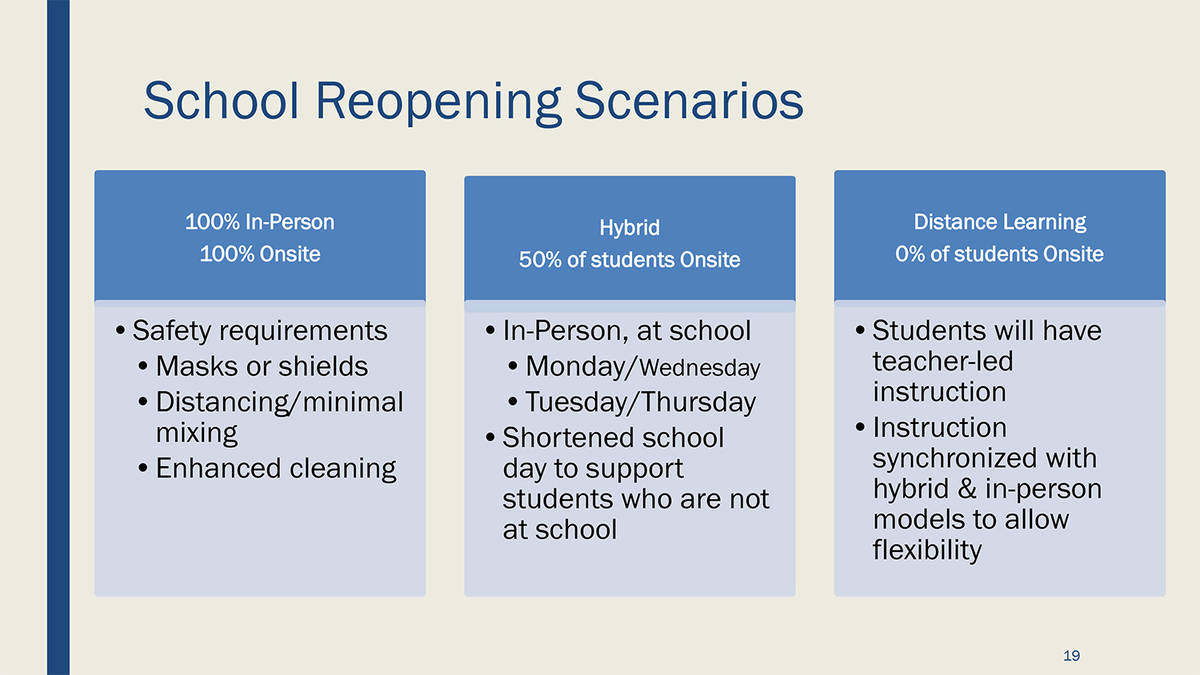 Special to the Pahrump Valley Times Taken from the presentation packet for the Nye County School Board's July 13 meeting, this slide shows various school re-entry scenarios. Depending on the school, students may be participating in 100% in-person or 100% distance learning, or a combination of both. 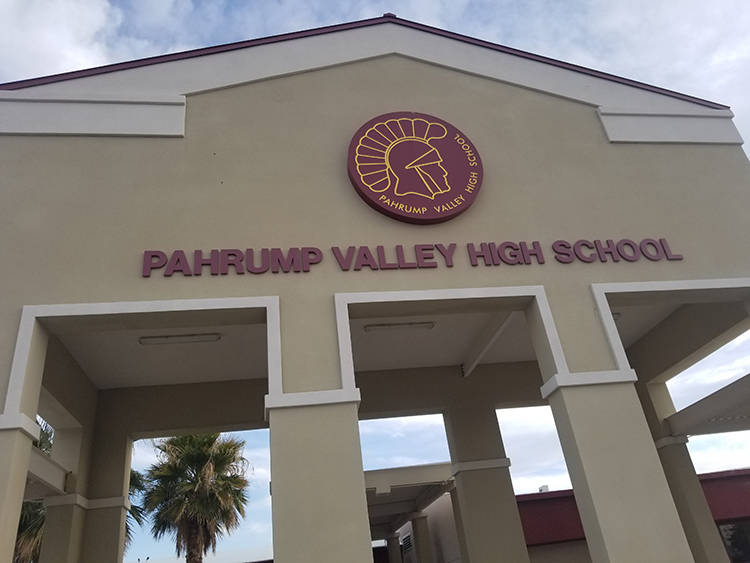 Special to the Pahrump Valley Times Pahrump Valley High School students will have a hybrid education model in the coming school year, with two days of on-campus learning and three days of distance learning. 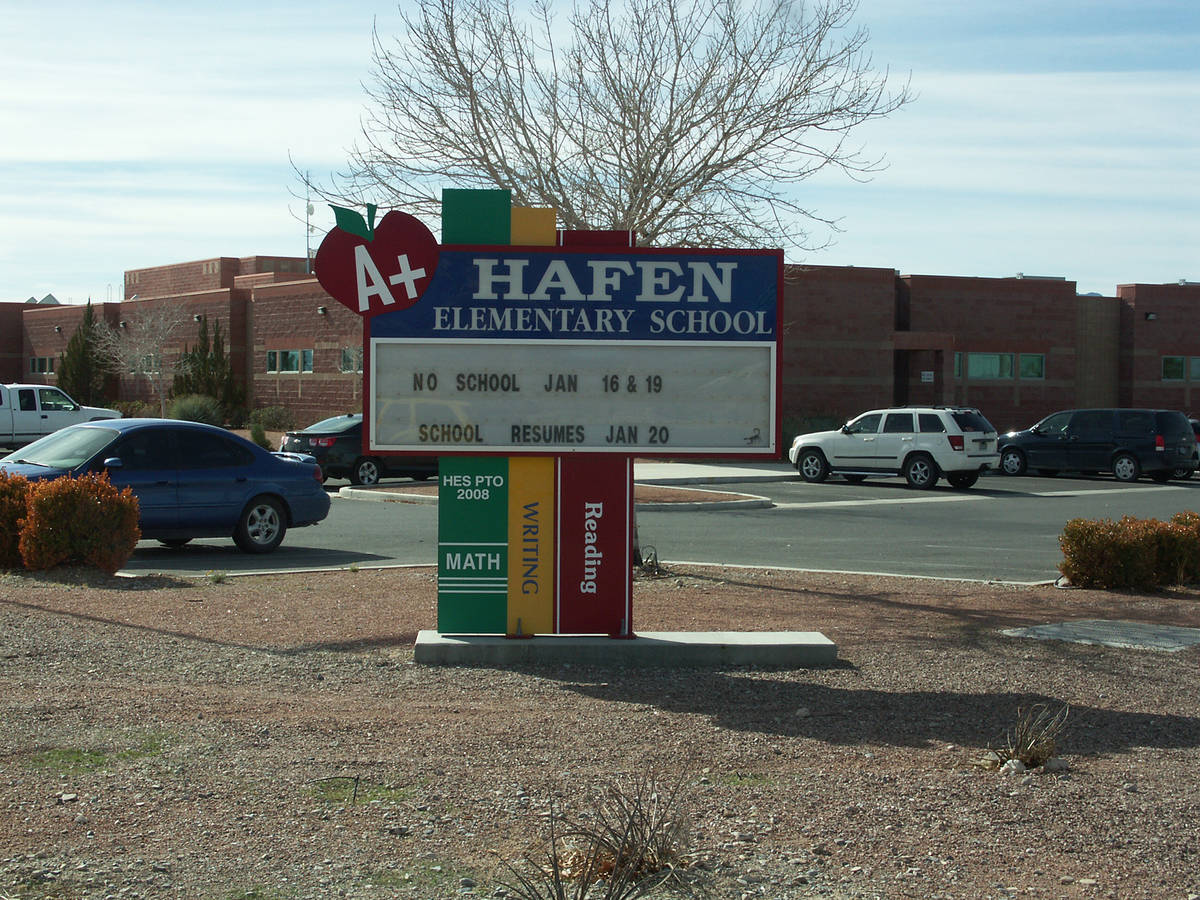 After weeks of waiting and wondering, Nye County parents now know what the 2020-2021 school year will look like for their children. The precise details are still to be hammered out by the individual schools, but there is now a general overview of what the coming academic term will bring.

The Nye County School District Board of Trustees voted on Monday, July 13 to approve a blend of three separate school re-entry plans, which incorporate a 100% on-site, in-person instruction plan, a 100% distance learning model and a mixture of the two, depending on the school in question.

At the same meeting the school board also voted to delay the start of the school year, which was originally planned for August 12. School is now scheduled to begin August 24 for students grades one through 12 and August 27 for pre-k and kindergartners. The semester end dates were not affected by that change.

For all of Nye County’s elementary schools, the plan is to have pre-k through fifth-grade students return to campus this August. However, if attendance at a particular school is simply too high, those in fourth and fifth grade may move to a hybrid system that includes both in-person and distance education, in order to meet occupancy requirements.

In Pahrump, where the vast majority of the student body resides, and there is only one high school and one middle school, youth attending Rosemary Clarke Middle School or Pahrump Valley High School will be on a hybrid system that combines two days of on-site education with three days of distance learning. The school days in a hybrid system will be shortened in order to allow support for students who are not on campus. Students with unique learning needs would be able to attend school on campus every day for four days instead of alternating days, the approved plan stipulates.

All hybrid models call for 50% of students on campus and utilizing the buses at one time. Students will go onto campus on a rotating basis, either on Mondays and Wednesdays or on Tuesdays and Thursdays. All students enrolled in schools using the hybrid model will be distance learning the remaining three days of the week.

For any parents who have children or others with whom they live that may be at a higher risk due to COVID-19, or those who are just not comfortable with sending their child to the classroom, 100% distance learning will also be available.

School officials emphasized that the district will strive for constant flexibility in its approach, as the situation with COVID-19 is continuously changing and emergency mandates and updated guidelines could alter how the district operates throughout the school year.

Nye County School District Associate Superintendent Evangelyn Visser took the lead on the presentation that broke down the three options that the school district had up for consideration during its July 13 meeting.

She began by explaining the process that had culminated in the three options, which included the formation of re-entry teams prior to the end of the 2019-2020 school term, a summer team comprised of seven school officials and a public survey that drew a huge amount of response from the community.

The re-entry teams were formed in April and met until the end of the school year, Visser said, with various focuses for each team, including physical safety, social-emotional growth, academics and more. The summer team then kicked into action when the district learned that it would need to come forward with a plan roughly 20 days before the anticipated start of the next school year, working together to create the three options.

The recommendation that evening was for a mix of all three options, which would provide various benefits, Visser stated. Those benefits included, “Younger students and those with unique learning needs will receive 100% in-person learning. All three models will be in place, increasing the district’s ability to quickly respond to changing needs. Allows for evidence-based decision-making,” as detailed in the presentation.

Of course, there will be safety measures put in place for schools conducting 100% in-person classes, including the use of masks for all students on Nye County School District buses as well as for staff, visitors and students ages 10 and over who are inside school buildings or on school property. Students nine years or younger will be encouraged but not required to wear face coverings when outside of classroom space. The same exemptions outlined in the governor’s emergency directive regarding mask use apply for the schools as well.

Distance learning will be quite a bit different than it was for the last two months of the spring semester, Visser detailed, with graded work taking center stage once more.

With the suddenness of the school closures this March and the abrupt shift to all distance learning, the decision was made not to grade student work in the fourth quarter of the school year.

“We froze students’ grades at the end of quarter three,” Visser told the board members. “Because we wanted to make sure we did no harm to students when we converted to distance learning, student work actually wasn’t graded for that fourth quarter.”

For elementary students, there were only pass or fail grades issued in the fourth quarter based on distance learning participation but for those in middle or high school, though work wasn’t graded, they still had a chance to improve upon their third-quarter grade and increase their overall semester grade.

“So we determined student participation based on the communication they had with their teachers and the teachers made a value judgment as to how much they (middle and high school students) were benefiting from the online distance learning and were able to improve their grade by 10 percentage points,” Visser stated, noting that this meant students were able to jump a letter grade, if they were deemed to be making progress with the distance learning model.

“Kids are going to have to complete work,” Visser said. “We do need to continue to have good communication and there will also be assessments that may be given online. So we need to look at ways that we can assess kids without harming them, making sure we give them credit for the work they have done but also not allowing them to look up the answers because it’s in an online environment. That’s going to require some training and also some professional learning for our teachers because they are not going to be there to proctor the tests.”

For those who may not be able to provide the technology essential to online learning for their children, board members made sure to reiterate that Valley Electric Association has partnered with the school district to help out.

Thousands of students took advantage of the school district’s offer and were issued a Chromebook but the offer of no-cost internet access was only utilized by three families.

However, the school district estimated 100 families did not have internet and board members are hopeful that all families who need internet access for their children’s education will take the opportunity this coming school term. Visser made sure to note that families with multiple students will be able check out a Chromebook for each of their students, so they can all have their own dedicated education devices.

The internet access is strictly controlled and can only be connected to the Nye County School District Chromebooks. There is also a limit of two gigabytes of data per month and restrictions that prevent the device from streaming Netflix or other streaming services. YouTube is also limited to educational videos only.