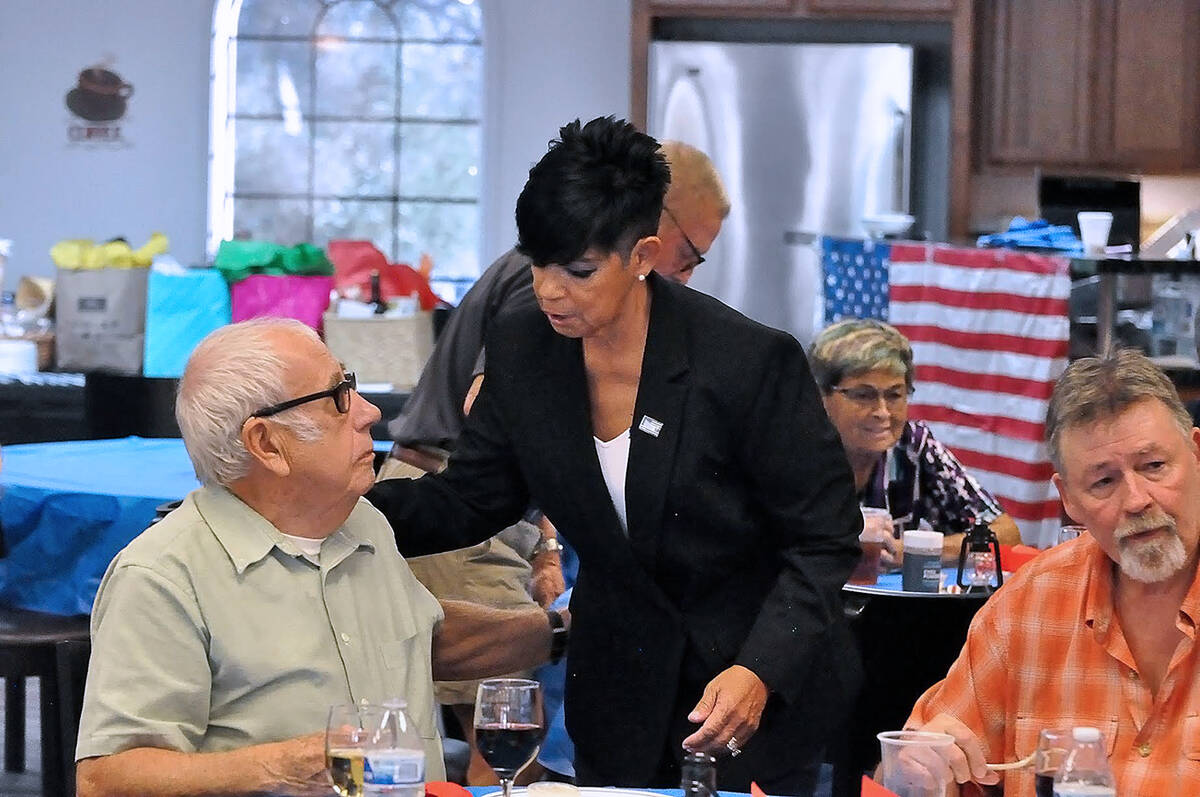 Horace Langford Jr./Pahrump Valley Times Diane Sauter, shown at center, is running for Nye County Sheriff in the 2022 election and she recently hosted a campaign event to help raise funds to support her bid for office and allow her to meet some of the area's voters. 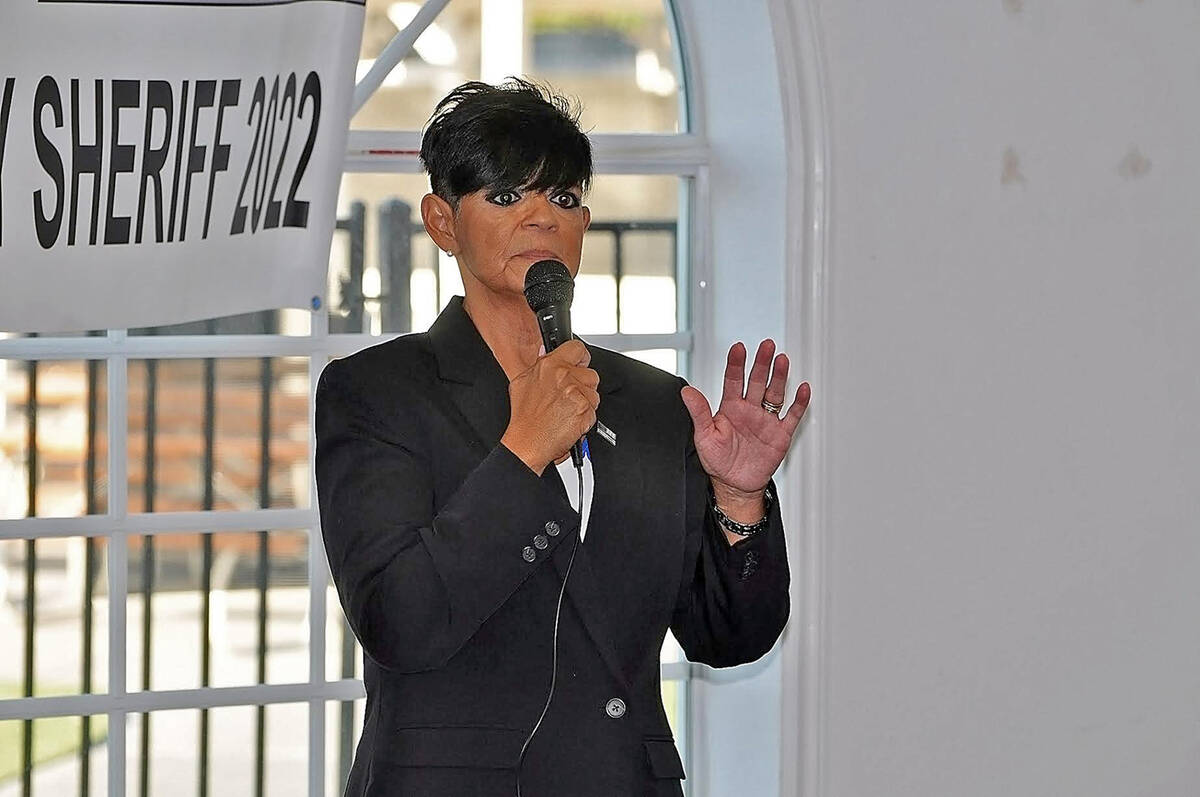 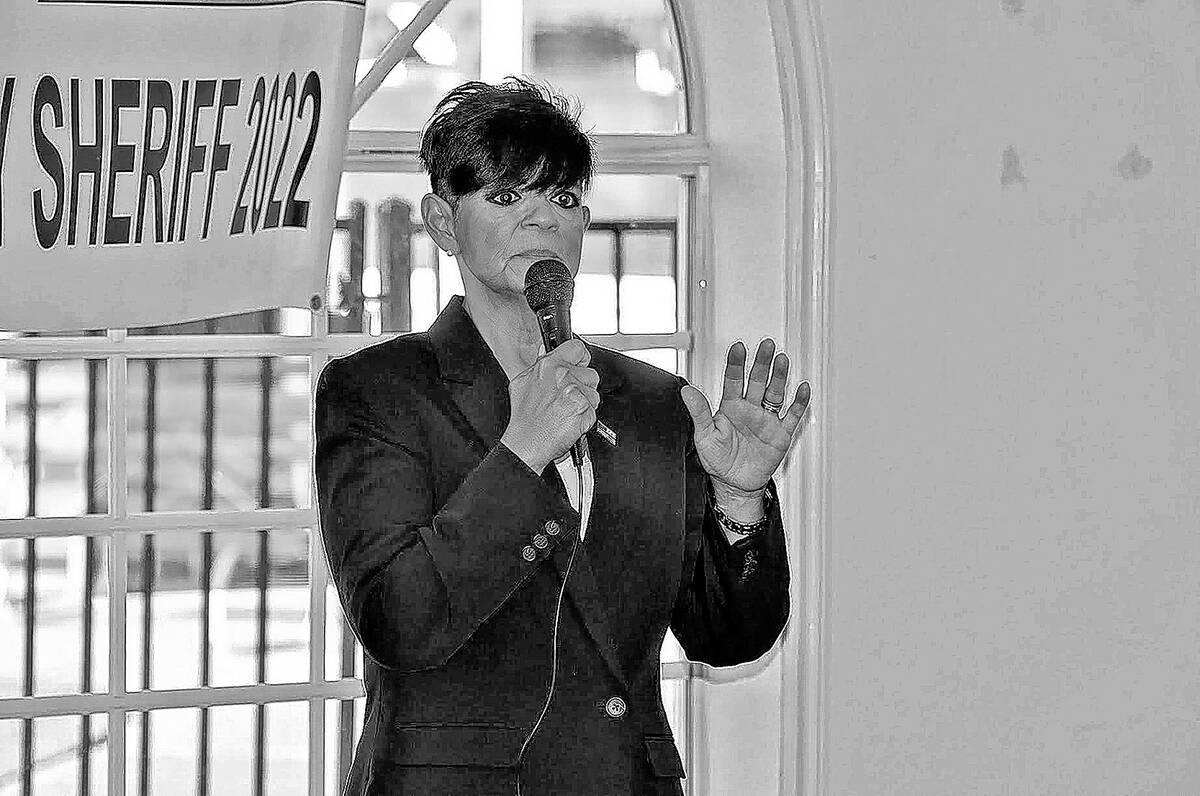 Nye County sheriff’s candidate Diane Sauter hosted a campaign fundraiser this past weekend, inviting members of the public to head on down to the Wine Ridge Clubhouse to meet her in person and spend an evening enjoying good food and good company. After the event came to a close, Sauter said she was quite pleased with the results of the shindig, which provided her with the opportunity to not only meet some locals but to also dispel some rumors that have been making their way around the community about her.

“Everything went smoothly, I wanted to make sure everyone felt welcomed! I believe we accomplished just that,” an enthusiastic Sauter told the Pahrump Valley Times. “I believe we had about 25 people there and meeting new faces and talking with everyone was definitely my favorite part of the evening.”

The event, held Sunday, Oct. 3, opened with a short speech from Sauter in which she strove to make her point that Nye County is in need of change. “We cannot sit idle and we cannot go backward, we need to make a stronger Nye County,” Sauter stated.

Following her remarks, the group gathered for the event took a moment to offer a prayer for current Nye County Sheriff Sharon Wehrly, whom Sauter will be challenging in the 2022 election and who was recently diagnosed with cancer. Dinner, including salad, spaghetti and garlic bread, was served, along with a cake for dessert, which was decorated with a Thin Blue Line Flag in a show of support for law enforcement. Entertainment for the evening included plenty of laughter, with three different comedians taking to the stage to tickle some chuckles out of the audience and there were even some raffle prizes available to add to the excitement.

Sauter was quick to thank all those businesses, some as far away as Tonopah, for donating the prizes, and concluded, “Everyone had such a wonderful time that we were actually two hours past the time we were supposed to leave! All in all, it went extremely well.”

On a more sticky subject, Sauter said she simply must address the rumors that are circulating in the county about her and her bid for office, stressing, “I personally don’t believe in rumors, just facts.”

She noted that she is well aware that mudslinging often accompanies elections but she would like to set to record straight when it comes to the gossip regarding her. “Being that I am running for Nye County sheriff, there’re going to be ugly rumors, and that includes my children, but let’s get our facts straight,” Sauter asserted. “I do not have any children in prison or serving any time!”

As to the other bits of talk, those disparaging her qualifications, Sauter said she is highly disappointed that people would attempt to make her out to be nothing more than a former security guard. While she acknowledges that she was in fact once a loss prevention specialist for J.C. Penney, which could be construed as a security guard type of position, she emphasized that this is far from her only professional experience.

“I was also a private investigator, a bodyguard and an undercover investigator,” Sauter stated. “After 10 years of that, I went and applied to the Will County Sheriff’s Department as a deputy. I have the privilege of working under some of the best sheriffs and training officers. With that training and additional training to prepare me for undercover work under a task force commanded inside Chicago, I have plenty of experience to make me a great fit for the Nye County sheriff’s position.”

Sauter said anyone with concerns regarding her qualifications, or any of the other rumors they may hear as the election cycle ensues, should speak to her directly before jumping to conclusions.

“Don’t believe the good ol’ boy network here that thinks they make the decision as to who everyone should vote for,” Sauter said. “Do you want Nye County to remain the same, or even step back in time? With one of the good ol’ boys who has been working under this regime? Or do you want someone with experience, who has no family in Nye County? I will not be intimidated by rumors, or threatened. I don’t do favors either. And remember, rumors are started because they don’t want you to win. The person starting the rumor does so because they have their own personal agenda.”

Voters can learn more about Sauter’s run for sheriff by visiting www.sauter4sheriff.org and can contact her directly at 775-253-0784.