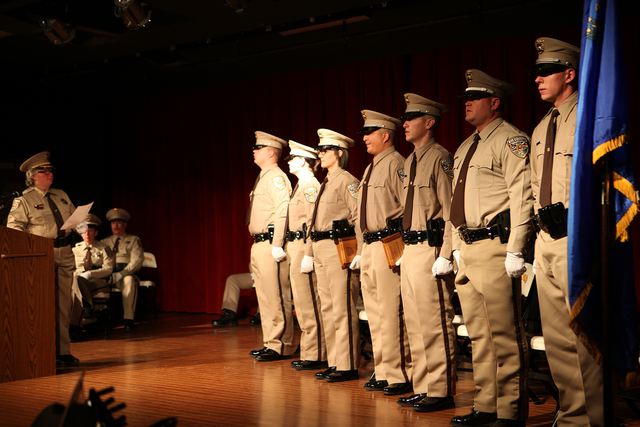 The Nye County Sheriff’s Office welcomed seven new deputies into the department during a special graduation ceremony on Saturday.

The deputies will assume duties at the Nye County Detention Center in Pahrump.

The group of deputies will also provide support in Beatty and Tonopah.

All seven are scheduled to start this week.

“In terms of staffing at the Nye County Detention Center, these deputies are crucial,” he said. “Our ranks are numbered and we are running a detention center with upwards of 150 to 170 inmates on a given day with one or two deputies.”

To earn their respective positions, all seven deputies underwent more than two months of intensive training during their time at the academy.

“The academy was 10 weeks long and we’ve done additional on-the-job training at the jail, which will continue for a couple more weeks,” Boruchowitz said. “It will be a total of approximately 13 weeks of training. They are now all deputies as the sheriff’s sworn them in. They will be working in the jail starting this week where they will have a shift and they will be ready to go after that.”

Boruchowitz also said it’s common that some academy candidates do not always finish the training.

“We had 10 that started but we lost one to another agency,” he said. “One candidate did not show up and another did not make it through the entire academy.”

She said the additional deputies will augment the already short-staffed agency.

“Seven arrived as one and seven left as a team,” Wehrly said. “As part of their training, these deputies were pepper sprayed, tazed and they learned numerous defensive tactics. The training was very intensive.”

Wehrly too, said she’s grateful to have additional deputies working in her office.

“These additional deputies are going to increase our staffing almost 100 percent,” she said. “This was long overdue and they will work here in Pahrump as well as Beatty and Tonopah, so they will be moving back and forth.”

Boruchowitz noted that the deputies will also perform court functions as part of their duties.

“We also manage the Tonopah and Beatty Justice Courts, along with both of the Pahrump Justice Courts and district courts,” he said. “Those seven bodies alone will help us immensely. We are still way short and we are preparing to hire another group of additional deputies for the jail, but these seven will definitely lighten the load. No doubt we can all look forward to another graduation when the time comes.”

During the ceremony, attendees viewed a video presentation of fallen Nye County officers, along with activities at the academy.

Kristen Cleveland spoke on behalf of the graduating class.

Family members and spouses officially pinned the badges on the group of graduates as the hour-plus ceremony drew to a close.