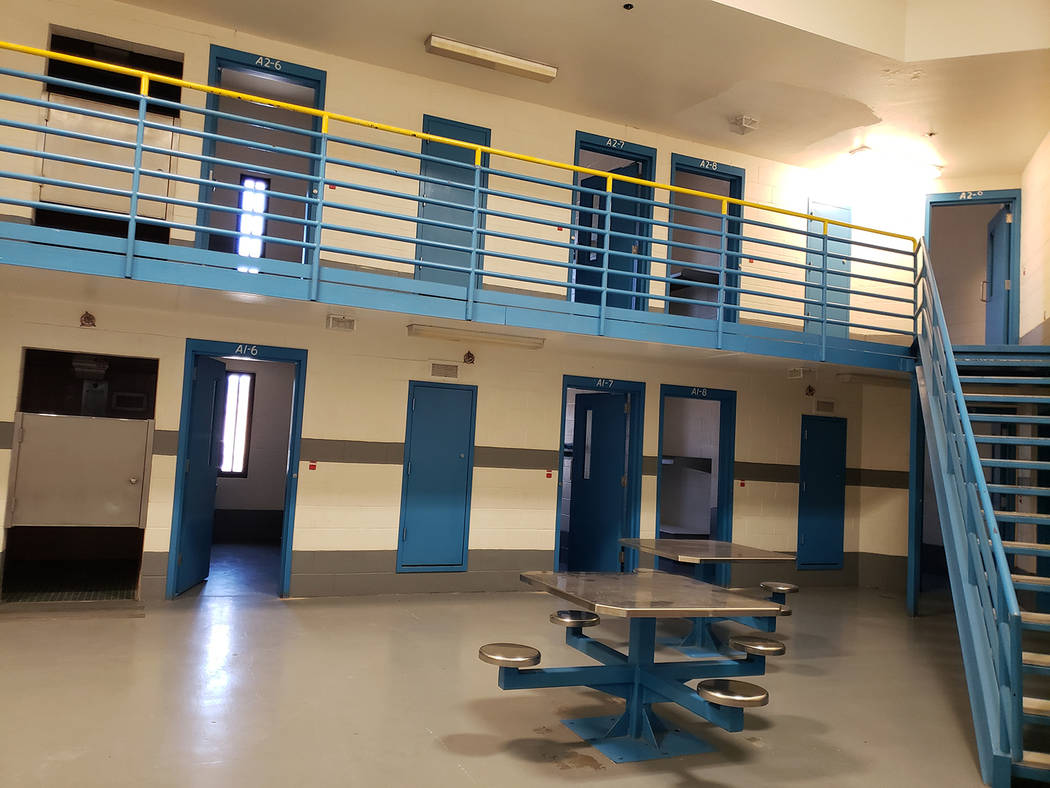 Special to the Pahrump Valley Times As the result of a contract between the Nye County Sheriff's Office and ICE, the Tonopah Jail, shown, will now be able to reopen. 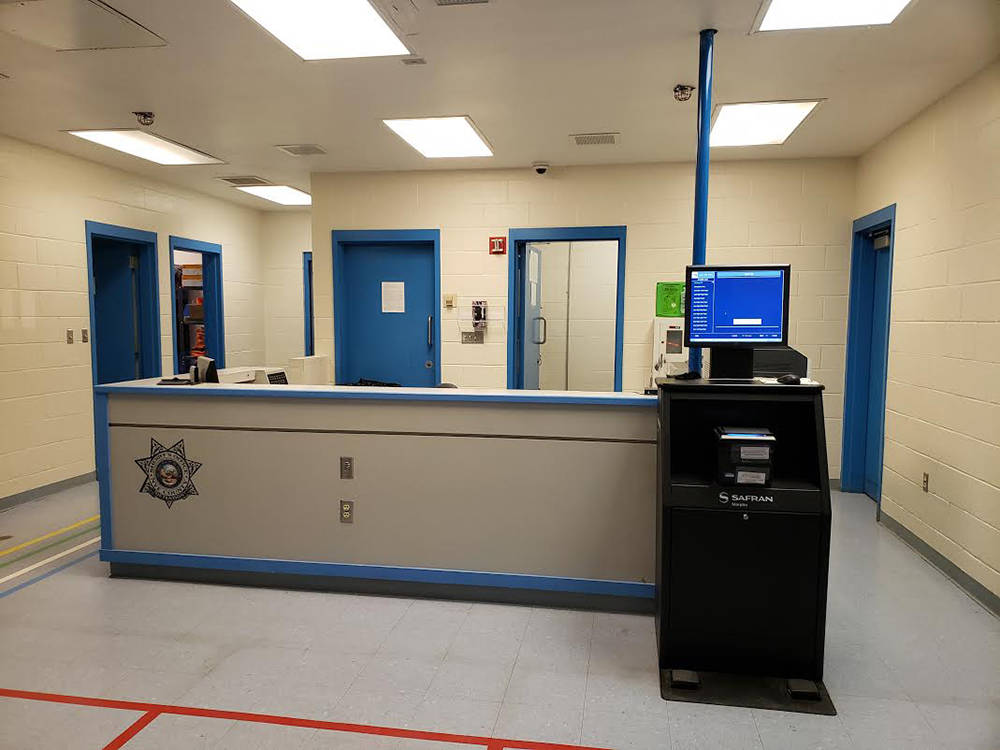 Special to the Pahrump Valley Times The interior of the Tonopah Jail, as pictured in this May 2019 photo. 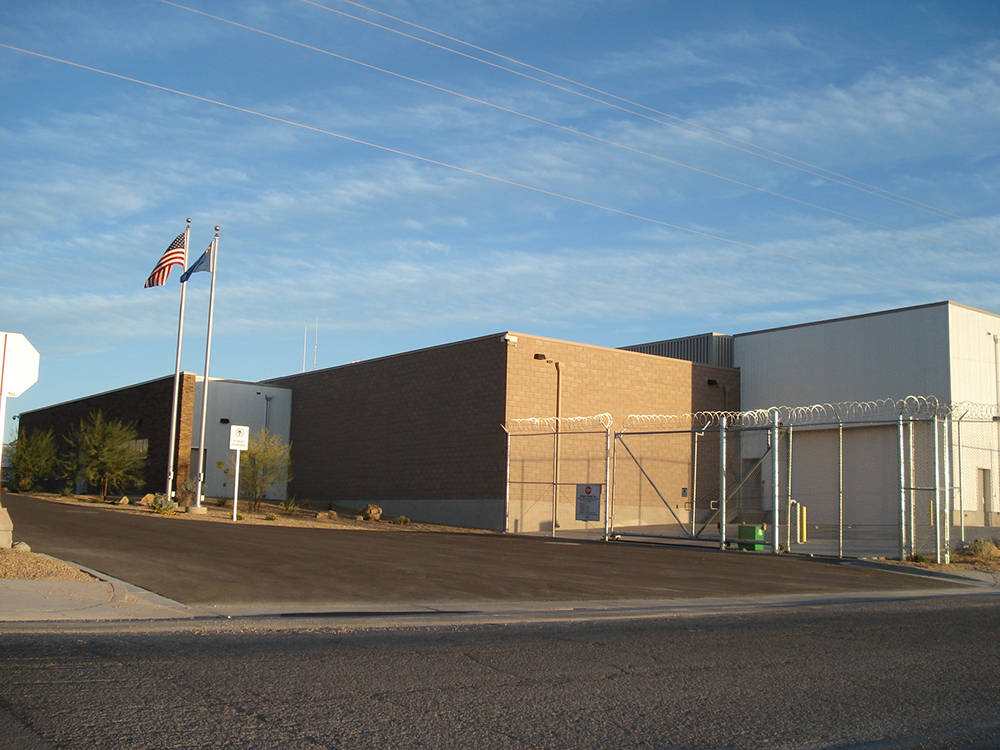 Special to the Pahrump Valley Times The Nye County Detention Center in Pahrump, pictured here, will soon house ICE detainees after the Nye County Commission approved the sheriff's office's request for to enter into a contract with that federal agency.

The Nye County Sheriff’s Office has received the go-ahead from the Nye County Commission to enter into an agreement with Immigration and Customs Enforcement for the housing of ICE detainees at the Nye County Detention Center in Pahrump.

The contract will also allow the reopening of the Tonopah Jail, which was shut down in March 2015 as the result of funding deficits in the county.

Although there appeared to be hesitation over the multi-million-dollar proposal on the part of some commissioners, including hard-pressed questions from commissioner Leo Blundo and flat-out opposition from commissioner Donna Cox, the board eventually approved the request to enter into the agreement by a vote of 4-1. Cox was the sole voice against.

Approval was for phase one, which includes a single year of detainee housing and transport. The sheriff’s office is required to return to the commission next year if the contract proves successful and the office makes the decision to request its continuation.

According to the presentation at the special commission meeting on May 10, though the contract will necessitate an initial outlay of cash on the county’s part and is anticipated only to break even funding-wise in the first year, it is hoped that it will show itself to be a money-maker thereafter.

“That’s what we are attempting to do here. It’s going to cost you a little start-up but that will be paid back in the second year,” Wehrly said.

Boruchowitz then took the lead, delving into the particulars of the agreement with ICE.

In addition to helping the county reopen the Tonopah Jail, Boruchowitz said the contract would also give the sheriff’s office the ability to provide adequate staffing for the Pahrump detention center, where he reported staffing levels to have been below acceptable levels since 2012. A slew of new hire requests, a majority of which would be paid for by ICE, were included as part of the agenda that morning as well.

Revenue from the contract would come from two portions, housing and transportation.

The expenses to undertake the first year of the contract would also come to approximately $3.4 million, meaning the first year was projected to essentially be a wash, Boruchowitz said. However, he noted there was a 10% contingency built into the expense portion to help ensure the county would not be on the hook for unexpected costs.

One of the first questions posed was from Nye County Commission Chairman John Koenig, who zeroed in on the 31 total additional positions requested for the first year of the contract. He asked whether the employment contract for those hired in phase one would stipulate that their employment would be terminated if the ICE contract was discontinued.

Blundo asserted that he too wanted to ensure it was crystal clear to those new hires that the county had no obligation to continue employing them if the ICE contract were to end. Boruchowitz assured that this was the case and Nye County Manager Tim Sutton reiterated that it was written plainly in the employment contracts. Nye County Human Resources Director Danelle Shamrell added that the employment contracts would be worded much as those for grant-funded positions.

Koenig then questioned what would happen if all 100 of the beds dedicated for ICE inmates were not filled. Boruchowitz said this was not a major concern as ICE has indicated it has many hundreds of detainees in need of housing.

Boruchowitz noted that the ICE inmates and local inmates would be a co-mingled population, classified on the same basis that is currently used. Any Pahrump area arrestees above and beyond the capacity of the Pahrump detention center would be transported to Tonopah to ensure there were always 100 beds for ICE inmates.

“It’s anticipated that we would drop our population of local inmates to 100 down here (in Pahrump) and so whatever that overflow (of local inmates) is, is what would be going to Tonopah and then the ICE inmates would remain here in Pahrump. The Pahrump jail would be at about 200 constantly and Tonopah would fluctuate with the overflow,” Boruchowitz explained. The Tonopah Jail contains 98 beds, he stated.

Blundo honed in on the initial investment required by Nye County, a figure that had not been included in the presentation. After some calculating, county staff detailed that the start-up costs would come to roughly $350,000, which would be funded by the sheriff’s budget and should be reimbursed when ICE begins making its payments for inmate housing.

Cox then expressed her concerns about drawing the friends and family of ICE inmates to town and the potential for a negative impact on safety and the public view of such a situation.

Boruchowitz stated that he did not anticipate that to be a problem as there would be no sentenced inmates or face-to-face visitations and therefore, no reason for inmate families or friends to travel to the valley. Additionally, no ICE inmates would ever be released locally.

There was strong support from the Tonopah community for the ICE contract, with the Tonopah Town Board and Tonopah Rotary Club both penning letters to declare their favor for the proposal. Not only will the contract allow the reopening of the Tonopah Jail and consequently increase employment opportunities in that area, but also it will provide the community with access to additional medical services.

Boruchowitz stated that the medical services provider, Serenity Mental Health, has agreed to a provision in their contract that allows medical care to be provided to the public from the Tonopah Jail, as feasible.

The motion to approve passed 4-1 and the sheriff’s office is marching toward the official contract beginning. ICE inmates are anticipated to arrive at the Pahrump detention center on August 1.

Phase two of the ICE contract would be quite a bit more ambitious, with Boruchowitz detailing that plans include the construction of an entire new wing of the Pahrump detention center and the addition of 200 more beds for ICE inmates.

With this, total revenue for housing and transportation in the second year was estimated at $6.9 million. Expenses for year two were projected to reach $4.3 million, leaving the county $2.6 million in excess revenues that could then be used to pay jail bond payments, for both the existing jail bond and the bond that would be necessary to build the new wing at the Pahrump detention center.

This is all contingent on the commission’s approval of phase two, however, a decision that will be made next year.

The sheriff’s office stated it will be providing quarterly reports to keep the commission updated on how the first year is progressing.

To view the entire presentation as well as the contract agreement visit www.nyecounty.net and click on the “Meeting Center” link. The documents are contained in the May 10 agenda.