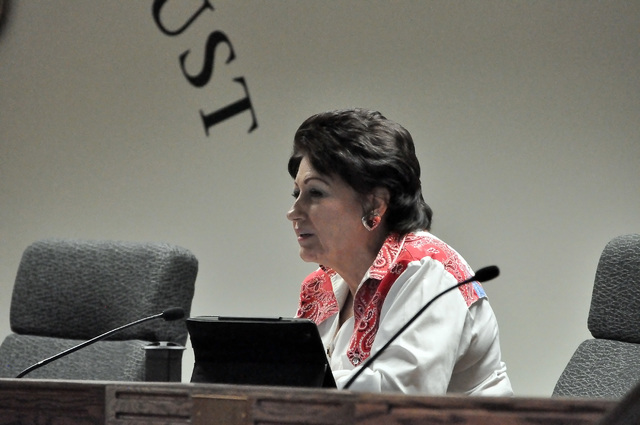 Horace Langford Jr. / Pahrump Valley Times - Nye County commissioners discussed county's budget for the fiscal year 2017 on Tuesday. According to the documents the county has collected more revenues as of Oct. 31 of this fiscal year compared to the same time last year.

Nye County has collected more revenue as of Oct. 31, compared to the same time last year, thanks to real property tax, officials said.

Nye County commissioners discussed the county’s budget status through Oct. 31, 2016 for Nye County fiscal year 2017 at the meeting on Dec. 6.

“The county has received 60 percent of real property tax through Oct. 31, which means more taxpayers are paying their annual tax payments earlier in the year. Revenues are slightly up, and this is the reason,” Nye County Comptroller Savannah Rucker said.

Nye County’s revenue for the 2017 fiscal year budget is $31.3 million, according to the documents. As of Oct. 31, the county has collected $8.7 million compared to $8.46 million as of October of last year.

Rucker said most of the departments are under the threshold of 33 percent through October, as 33 percent of the fiscal year has elapsed for payroll, services and supplies.

“Most departments look really good, if they have an overage, it’s because of contractual items that were encumbered in the beginning of the year,” Rucker said.

The Nye County total percentage of expenditures, including encumbrances across all general fund departments is 36 percent. Encumbrances are an amount of money required to be spent on a stated expense in the future, a year-long contract for services.

Many of the revenues are still well below where they should be for the current fiscal year, however officials said that it is normal.

“We see about 25 percent of our revenue in the last two months of the year, which will be May and June and into July actually. So, that’s why our revenues are so low right now because we see revenues at the end of the year,” Rucker said.

Officials said contracts are normally frontloaded and the county has to wait for revenue through taxes.

Nye County Manager Pam Webster said the county has a dry spell of no revenue until two months after the books are closed.

“Because our revenue comes in slowly and our costs, especially payroll, have gone on a flat line, we have peaks and valleys, we don’t have collection of tax until August, we don’t always see it until at least the end,” Webster said.

Nye County Commissioner Dan Schinhofen said the report “is not as dire as some want to forecast it.”

“I see the light at the end of the tunnel and I don’t think it’s an oncoming train at this point,” he said.

Webster said the county had two collections of its four quarters of real property taxes, and with two, the county is at 60 percent.

“That’s a pretty strong number even though some people do pay their entire year the first quarter but that’s a good sign that you are 60 percent collected with 50 percent of the cycle done,” Webster said.

Additionally, the county collected 16 percent of consolidated tax. The county has yet to receive Payment in Lieu of Taxes, or PILT funding.

“I think also, if you look at sales tax, the consolidated tax, this is only two months, because there’s a three-month lag. So, that’s only one-sixth of your income and you are at 16 percent, so that’s good. You are right on track. And we haven’t hit the peak sales tax, so there are some good indicators, but like you said, we’ve still got that big gap in PILT that can make a huge difference if it doesn’t get fully funded,” Webster said.

PILT payments are made annually to local governments that have non-taxable federal lands managed by the Bureau of Land Management, the U.S. Fish and Wildlife Service, the National Park Service, the U.S. Forest Service and for federal water projects and some military installations.