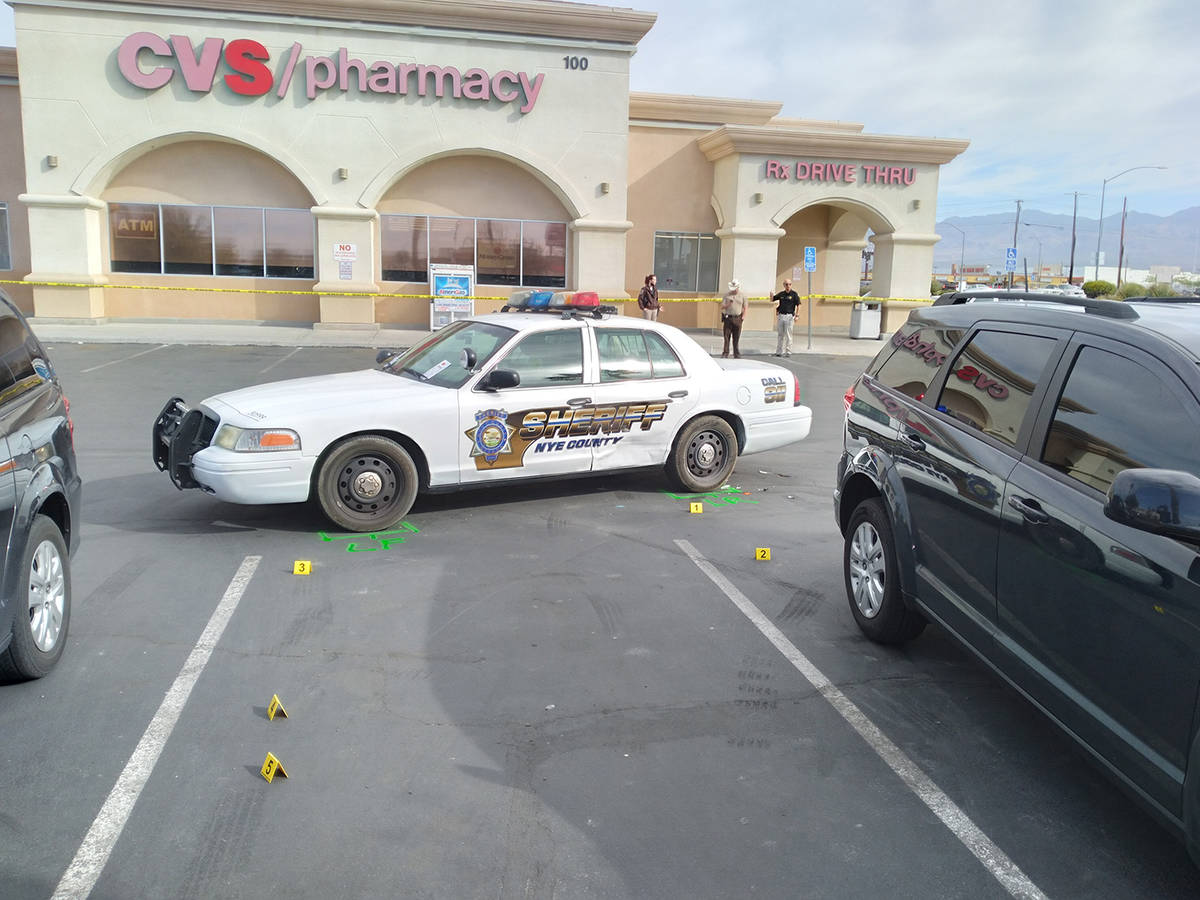 Selwyn Harris/Pahrump Valley Times A Nye County Sheriff’s Office deputy received minor injuries after he was dragged several feet by a fleeing suspect's vehicle in the CVS parking lot on Highway 160. While leaving the scene, the man, identified as Eric Daly, also struck a marked sheriff’s office unit and another vehicle, according to the sheriff’s office. 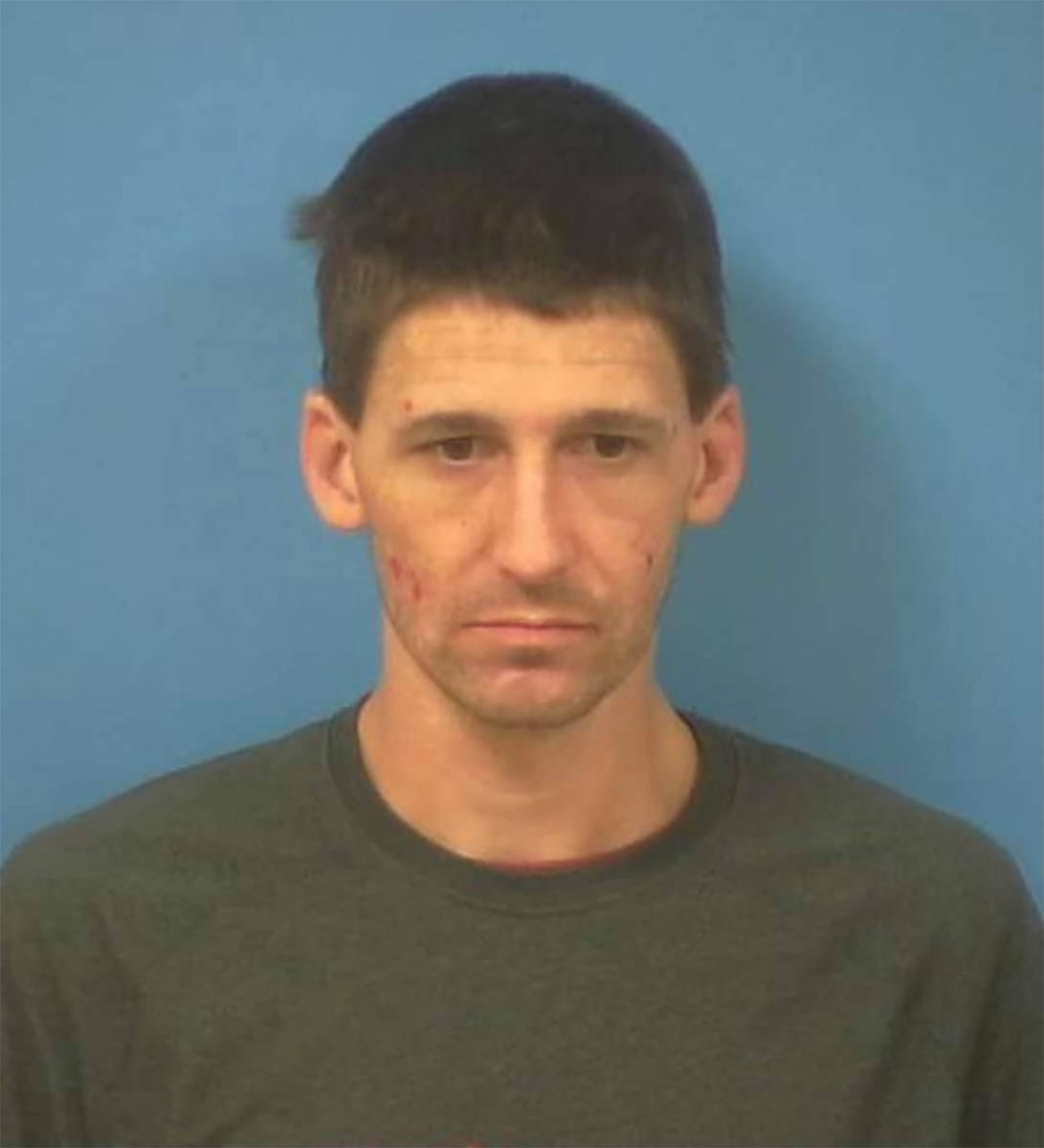 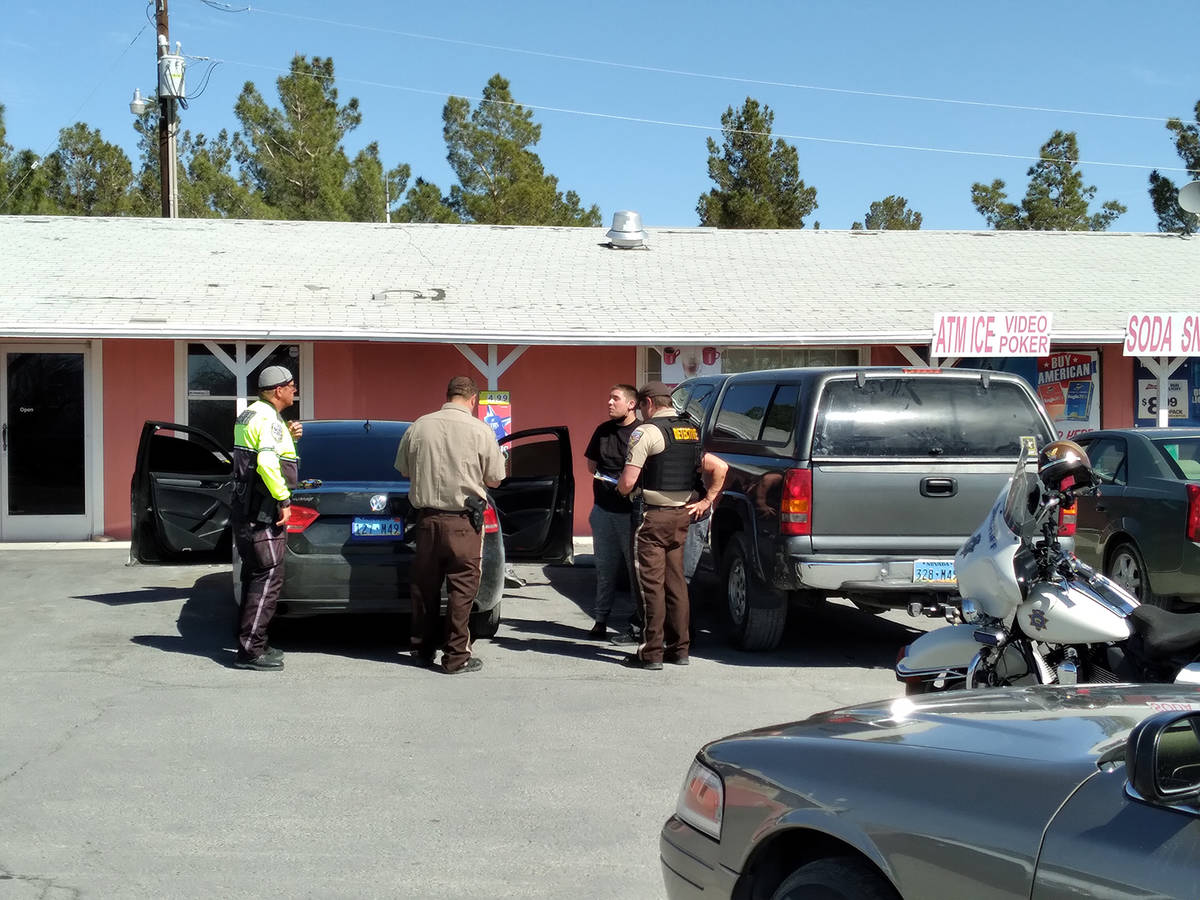 Selwyn Harris/Pahrump Valley Times Nye County Sheriff's Office deputies and detectives question an individual who was believed to have occupied a vehicle along with wanted suspect Eric Daly on Wednesday afternoon April 7. Daly is wanted for evading arrest after he was involved in an altercation with deputies in the parking lot of CVS on Wednesday morning April 7, according to the sheriff's office.

A Nye County Sheriff’s Office deputy sustained minor injuries after a physical altercation just after 8 a.m., in the parking lot of CVS on Wednesday, April 7.

The incident, according to Sgt. Corey Fowles, began when deputies were summoned to check on the welfare of the individual inside a vehicle.

The suspect was identified as Pahrump resident Eric Daly, according to Detective Sgt. Corey Fowles.

“Deputies were dispatched for what appeared to be a medical problem,” Fowles said. “When they arrived, they found the individual in the vehicle and he appeared to possibly be under the influence.”

Fowles also noted that Daly is well known by area law enforcement, due to previous encounters.

“We knew that he had warrants for his arrest and deputies told him that he was under arrest for his warrants,” Fowles said. “They reached in the window to affect the arrest because he wasn’t initially cooperating. When they tried to put their hands on him to affect the arrest, he backed up and dragged the deputy a few feet, and hit a marked sheriff’s office vehicle. That deputy sustained minor injuries.”

Fowles also said that Daly then left the scene and was last seen driving westbound on Basin Avenue.

“He is known to us, and as I mentioned he does have warrants out of Pahrump Justice Court for other crimes,” Fowles said. “We don’t have a known address but he is still at large and we are actively trying to locate him. He was last seen driving a silver Mitsubishi Lancer with fictitious plates heading west on Basin.”

Later that day, sheriff’s office deputies performed a traffic stop on a different vehicle that was reportedly occupied by Daly and a juvenile, according to Capt. David Boruchowitz.

“We obtained information that he was in a black Volkswagen Jetta,” Boruchowitz said. “Our officers engaged them at Dandelion and Highway 160, but the vehicle led our officers on a pursuit, where they lost him in this general area.”

That high-speed pursuit ended in the parking lot of a strip mall located at the intersection of Gamebird Road and Pahrump Valley Boulevard, where Nye County Sheriff’s Office deputies and detectives swarmed the vehicle, only to learn that Daly was not inside.

“The individual that we’re out with reports that he had dropped Eric Daly somewhere else in an unknown area on Blagg Road,” Boruchowitz said. “We don’t think we’re quite getting 100 percent cooperation, but we’re still on the hunt for Mr. Eric Daly, and we are going to continue looking for him. This individual we are out here with is in custody and he will be turned over to juvenile probation. We really don’t have a location where Mr. Daly might be right now, it sounds like he traveled quite a bit from place to place, so we don’t actually have a house that we are looking for, so we are just looking for him in general.”

Regarding the condition of the injured officer in the morning altercation, Boruchowitz said Deputy Xavier Gideon is on the mend.

“Deputy Gideon was dragged by the vehicle driven by Mr. Daly which smashed into one of our vehicles while he was trying to escape the arrest,” Boruchowitz noted. “Gideon is alright and at this time and he is at home resting. He will be out of work for a little bit, but he’s okay.”

Anyone with information on the whereabouts of Daly is urged to call the Nye County Sheriff’s Office at 775-751-7000, or by email at sheriff@co.nye.nv.us.