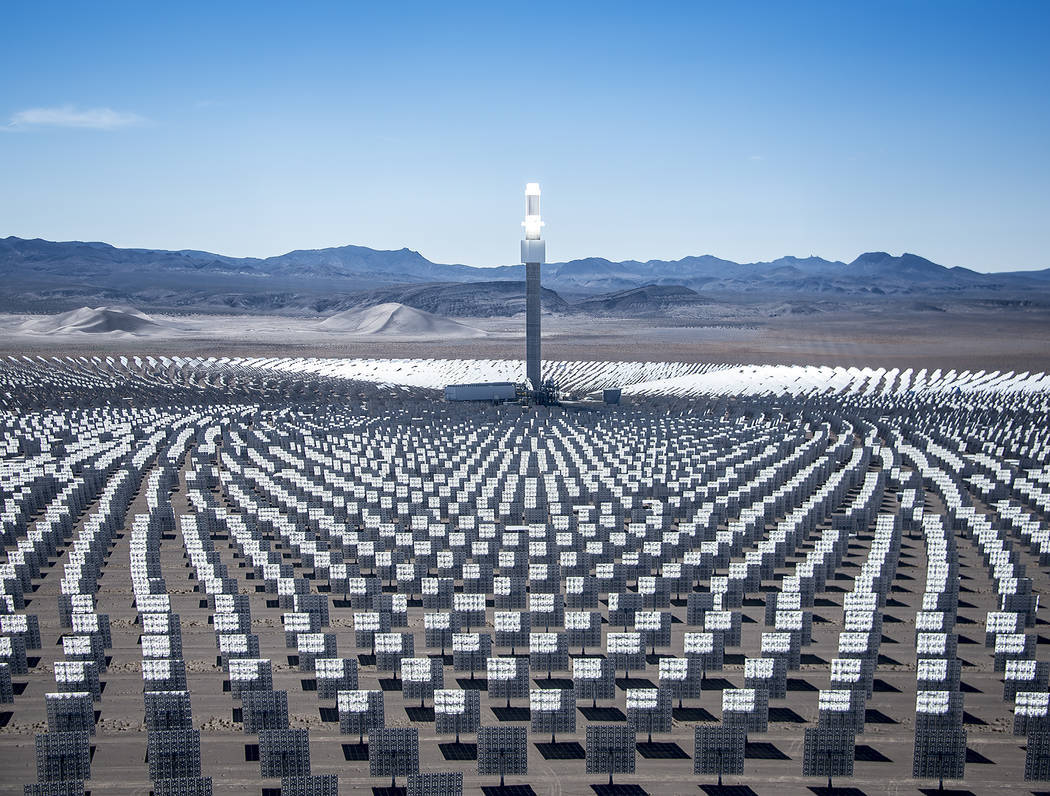 Las Vegas Review-Journal file SolarReserve, original developer for the Crescent Dunes solar plant near Tonopah, has filed a lawsuit against the Department of Energy. The suit comes just days before NV Energy sent a notice of termination to Tonopah Solar Energy, Crescent's operator. 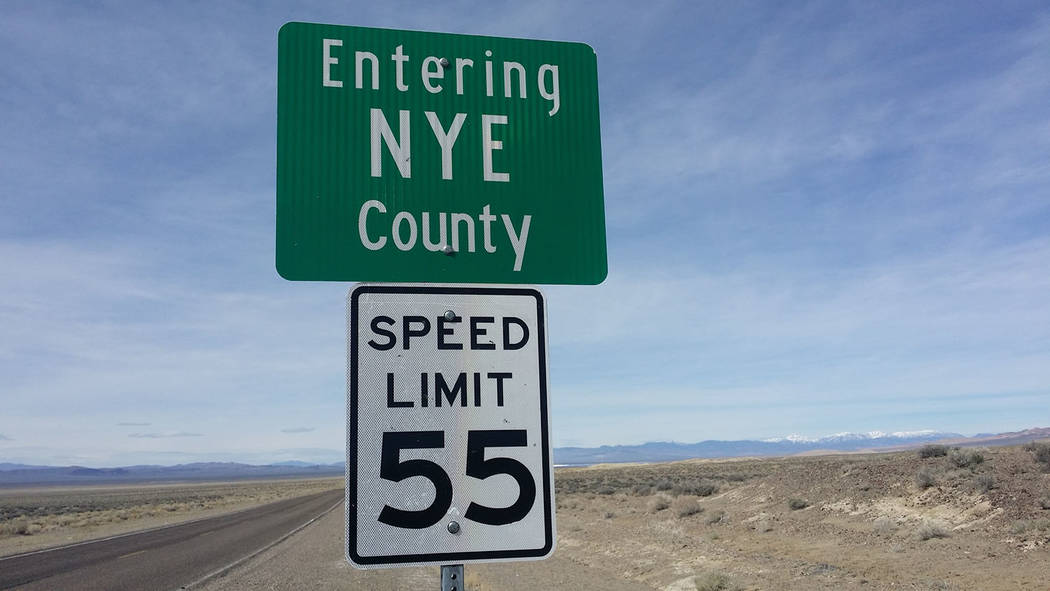 David Jacobs/Pahrump Valley Times NV Energy has sent a termination notice to Tonopah Solar Energy, operator of the Crescent Dunes solar plant in northern Nye County, of its renewable power purchase agreement with the company. The contract was set to expire at the end of 2040. 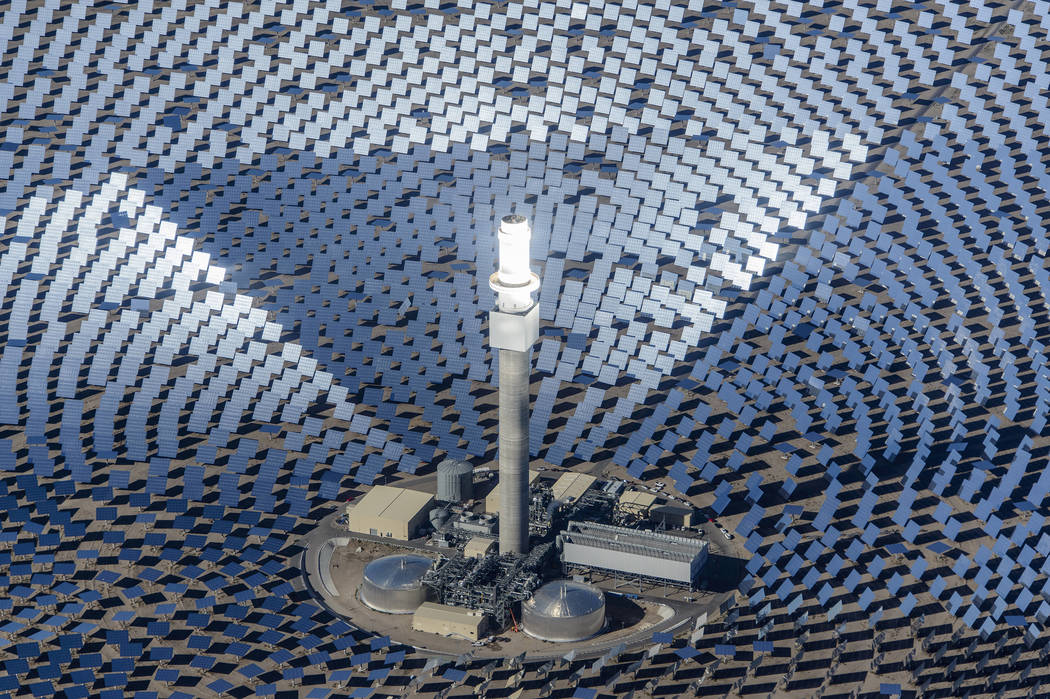 Special to the Pahrump Valley Times An aerial view of SolarReserve’s Crescent Dunes solar plant. According to information on energy.gov, the project was expected to support 45 permanent jobs and disperse over $10 million annually in salaries and operating costs.

The future of the Crescent Dunes solar project, near Tonopah, may be uncertain.

SolarReserve, original developer of the 110-megawatt solar project near Tonopah, has filed a complaint against the U.S. Department of Energy, alleging that the DOE “improperly sought to amass increased control over the Crescent Dunes” $1 billion solar project and over its operator, Tonopah Solar Energy LLC.

The complaint portends that the solar project, backed by a $737 million loan guarantee from the Energy Department, could end up in bankruptcy. The lawsuit, which also includes Tonopah Solar Energy, was filed on Oct. 2 in a Delaware court.

The end result of recent actions by the Energy Department, according to the filing, in part, “will be to interfere with SolarReserve’s right to vote on” Tonopah Solar Energy’s board, taking major decisions on things, such as bankruptcy, out of SolarReserve’s hands.

The complaint came just a day before a renewable power purchase agreement with NV Energy, the solar project’s sole customer, was set to be terminated with Tonopah Solar Energy.

NV Energy sent the notice of termination Oct. 4, a spokeswoman for NV Energy said in an email.

SolarReserve began efforts to raise the project over a decade ago in Tonopah with commercial operations beginning in 2015.

In the early years of the project, an affiliate of SolarReserve formed Tonopah Solar Energy as an LLC to develop, own and operate the solar project with molten salt storage in Tonopah, according to the complaint. In 2011, the DOE issued the more than $700 million loan guarantee to Tonopah Solar to fund the Crescent Dunes project.

According to information on energy.gov, the project was expected to support 45 permanent jobs and disperse over $10 million annually in salaries and operating costs.

SolarReserve recently sought to replace its representative on Tonopah Solar Energy’s board, its “right” under the most recent LLC agreement, according to the lawsuit.

Within days of installing Troy Taylor to the board in September, the Energy Department issued a notice of default to SolarReserve, according to the lawsuit. SolarReserve has a stake in Tonopah Solar through “several intermediary entities.”

“By the notice of default, the DOE seeks to appoint two new managers to the board of managers for Tonopah, which gives the appearance of the DOE in complete control of Tonopah through its handpicked “independent” directors which comprise the entirety of the Tonopah Board of Managers,” the complaint states.

According to the lawsuit, the Energy Department has essentially appointed all of Tonopah Energy Solar’s independent managers, and SolarReserve no longer has a representative on the board.

“Thus, SolarReserve, through its SolarReserve manager, can no longer prevent a unanimous vote for virtually any material corporate decision of Tonopah, including, but not limited to, Tonopah filing for bankruptcy which may not be in Tonopah’s best interest,” the complaint stated.

With the Energy Department’s recent actions, according to the complaint, the “net result” will include SolarReserve not having a representative on Tonopah Solar Energy, along with causing “the forfeiture of SolarReserve’s property rights in a $1 billion project that it started; and wrest control of Tonopah from its equity holders.”

SolarReserve is looking to gain its representation on Tonopah Solar Energy’s board through the lawsuit.

A representative from SolarReserve could not be reached before the publication of this article.

The Energy Department was contacted but declined to comment on pending litigation.

NV Energy sent a potential default notice at the beginning of 2019 to Tonopah Solar. NV Energy reached an agreement with the plant to provide electrical power for NV Energy’s grid for a 25-year term, set to expire on Dec. 31, 2040.

In June, NV Energy sent a notice of termination of the agreement because the project had “failed to produce the requisite energy levels required by” the agreement, according to the lawsuit. Tonopah Solar had a 90-day “cure period,” which expired on Oct. 3, the suit stated.

“We are following the terms and conditions of our contract expressly with this action,” said Jennifer Schuricht, a spokeswoman for NV Energy. “We have a responsibility to our customers to ensure the projects for which we have Public Utilities Commission of Nevada approval are delivering as contractually required. Unfortunately, this project is not performing pursuant to the terms and conditions of its contract and we will enforce its provisions diligently to protect our customers from any negative reliability and cost impacts as a result.”

SolarReserve has had operational issues in the past; the plant shut down for eight months less than a year after the plant started producing power due to a leak from one of its molten salt tanks in October 2016.

In the lawsuit, it’s noted that Tonopah Energy Solar failed to meet the “requisite energy levels required by” the purchase agreement with NV Energy: “such failure being based in part on various issues with a hot salt tank, and the construction-related problems that caused problems with the operation of the plant,” the complaint stated.

“In response to the termination notice, Tonopah Energy Solar advised that the issues with the hot salt tank were the result of “unforeseeable events,” the lawsuit stated.

In the lawsuit, SolarReserve stated it believes issues with the hot salt tank and construction issues were caused by Cobra Thermosolar Plants Inc. and its related entities. In 2011, Tonopah Solar contracted with Cobra for “engineering procurement and construction” of the facility in Tonopah.

In a June report to the Nevada public Utilities Commission, NV Energy stated: “Since declaring commercial operation in late 2015, the plant has experienced frequent and prolonged outages.”

NV Energy also stated in that report that, “The current outlook reduces the expected amount of energy and credits from this plant by 50 percent in 2019 and 25 percent in 2020 and beyond. Given the size of the project, Nevada Power simply does not have enough credit reserves nor sufficient new renewable capacity in the pipeline to overcome lasting, multi-year credit shortfalls.”

NV Energy stated it is positioned to meet “its future credit commitments,” according to its report to the PUC.