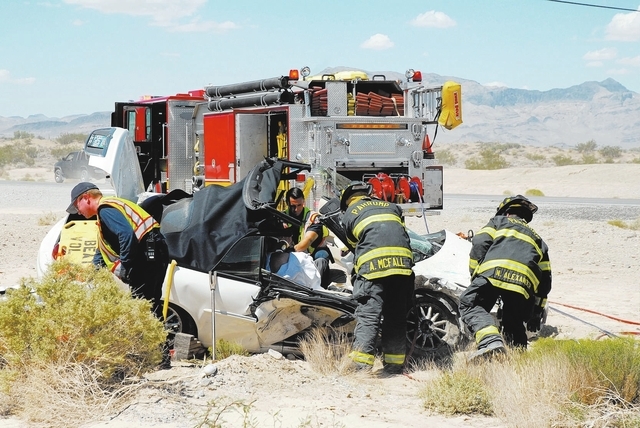 According to the Nevada Departments of Public Safety and Transportation, based on preliminary figures as of Dec. 26, the number of traffic-related deaths on Nevada’s roadways decreased from 262 in 2012 to 259 in 2013.

The slight decrease in traffic fatalities continues a general downward trend across the state after Nevada reached an all-time high of 432 traffic-related deaths in 2006.

Although statewide there were three less deaths in 2013 than the previous year, traffic-related deaths in Nye County reportedly increased by 37.5 percent.

According to information from the Nevada Departments of Public Safety and Transportation, preliminary numbers show there were 11 reported deaths on Nye County roadways in 2013. That’s three more than the previous year where there were only eight reported.

Although the number of fatalities went up, the number of deaths from alcohol-related accidents in the county reportedly decreased from two in 2012 to one in 2013.

Despite slight increases in the number of traffic-related fatalities in several counties last year, traffic and safety advocates say they will continue to put enforcement, engineering, emergency medical and educational strategies in place to reach their goal of cutting the number of fatalities on Nevada’s roadways in half by 2030, eventually reaching zero fatalities across the state.

“Across the state, NDOT and our partners continually work to save lives and prevent serious injury on Nevada roads,” Nevada Department of Transportation Director Rudy Malfabon said in a statement. “But we know that reaching zero fatalities relies on everyone. When we think of ourselves, our friends and our family, one traffic death is too many. That’s why it is so important to be safe every time we’re on the road.”

“No matter if you’re in a car, on foot or on a bike, always look for each other and share the road. It truly comes down to always focusing on the road and being safe while driving, walking or riding. And wearing a seat belt is still one of the most important things you can do to help save your life and reduce injuries in a crash,” he said.