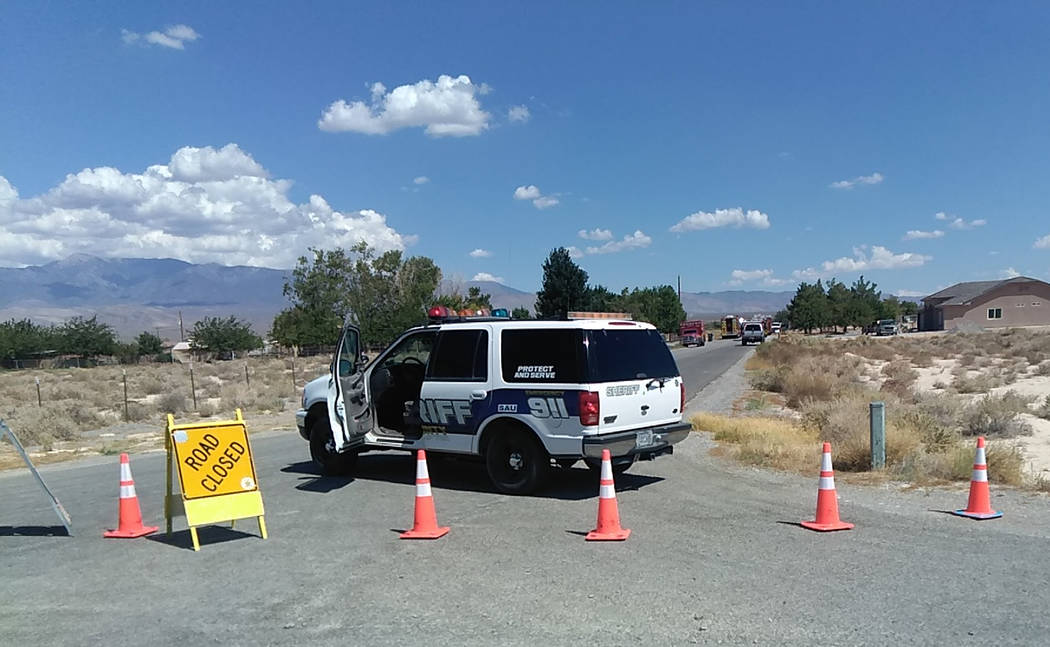 Selwyn Harris/Pahrump Valley Times Access to the 4600 block of East Navajo Blvd was blocked throughout Friday Sept. 6, after a suspect drug lab was discovered on a property in the area. Nye County School District and sheriff's officials devised a plan where school students residing in the area arrived home safely. 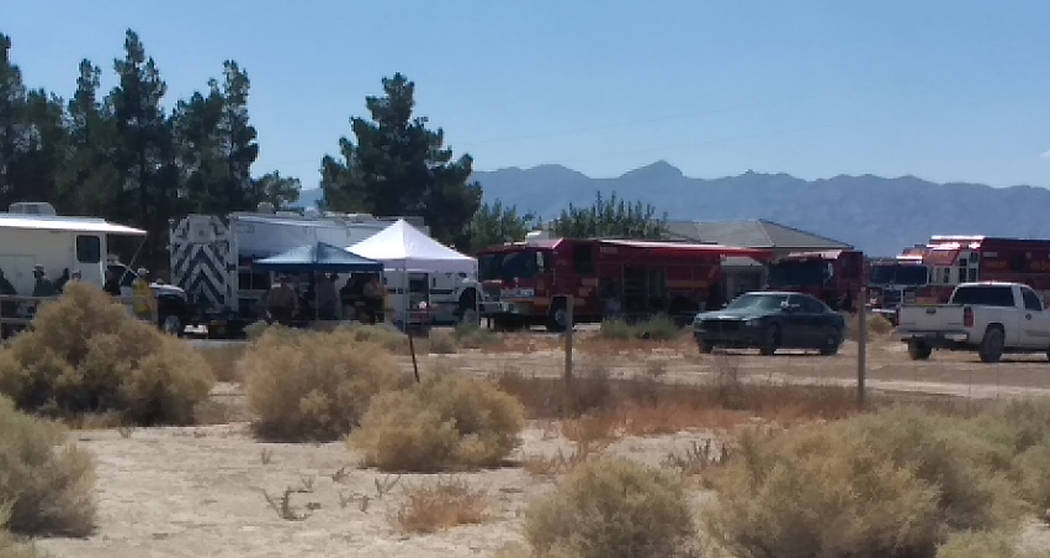 Selwyn Harris/Pahrump Valley Times Nye and Clark County first responders joined forces to investigate and mitigate the scene where officials said an active PCP was in operation on the Navajo Blvd. property. One man was arrested on an outstanding failure to appear warrant. No injuries were reported.

Nye County Sheriff’s Office deputies and detectives, along with Pahrump Valley Fire and Rescue Services crews were summoned to a residence along the 4600 block of Navajo Boulevard after neighborhood residents detected strange chemical odors emanating from a travel trailer on a property.

As stated in a sheriff’s office video news release, Lt. Adam Tippetts said first responders arrived in the area at approximately 1 a.m., Sept. 6, where two men were observed running from the scene.

Deputies, Tippetts said, were able to apprehend a third individual, who was found to have a warrant for his arrest.

Additionally, a search warrant for the Navajo address was obtained and executed, where deputies discovered what appeared to be a clandestine drug lab.

“All day, deputies and detectives were on scene investigating and collecting evidence,” Tippetts said. “In total, they discovered over 2,300 pounds of solvents and precursors for the manufacturing of phencyclidine, also known as PCP. Numerous other agencies were involved in the investigation and cleanup of the scene. A hazardous waste disposal company out of Las Vegas assisted in the collection and disposal of the chemicals found on scene.”

Law enforcement officers donned gas masks as they walked around, inspecting the property, while a command post was established just across the street from the scene.

Pahrump Valley Fire and Rescue Services Chief Scott Lewis said additional crews were dispatched to assist with the investigation, and the investigation of possible suspect materials stored on the property.

“While it was never known to be an actual spill, it was not a true Hazmat situation, but more of a detection and analysis for the determination of those products,” Lewis said. “A remediation was undertaken later on by a third party. There were no injuries and crews that were on scene for an extended period of time further assisted law enforcement with scene illumination for the remainder of the investigation.”

As the morning-long investigation continued into the afternoon, Nye County School District Transportation Supervisor Cameron McRae said district officials and the sheriff’s office devised a plan for students who live on Navajo Boulevard to arrive home safely, as the intersection was blocked off by sheriff’s auxiliary units at Jane and Fox avenues.

“They did contact us, as they always do, so we had communications with them and their staff,” McRae said. “Those types of incidences, that can affect student transportation, and in this case they indicated that they did not want us driving on Navajo. They were then going to take care of getting those students who may have lived on the affected street.”

Tippetts, meanwhile said the man arrested was identified as Mitchell Ell, 73, who had a local failure to appear warrant.

He also conveyed a message from Nye County Sheriff Sharon Wehrly, who thanked all of the agencies involved in the investigation, which is ongoing.