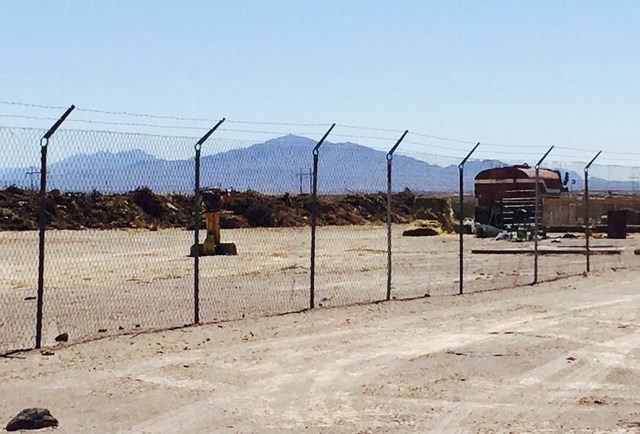 The troubles for Amargosa Valley pig farmer Matt Parker and property owner Stephen Settlemeyer are not over.

The pair was directed to remove compost piles found to be a “nuisance” during a hearing before the Nye County Commission on March 3. Though the 30-day window afforded by written notice has not expired, another complaint has been filed by Amargosa Town Manager Mike Cottingim. This time the complaint, filed with the Nevada State Department of Environmental Protection, alleges a “spill” of an unknown substance on the property.

The second complaint, filed on March 20 states that an unknown “white substance” which is believed to be milk or milk substances is being pumped onto green waste or compost piles. The complaint also alleges that the farm operation does not have the “appropriate controls in place to be protective of human health and the environment,” and that the operator does not have the necessary permits for a “composting operation.”

The basis for the second complaint, according to Cottingim, was Settlemeyer’s appearance at the Amargosa Valley Town Board meeting March 26 where he admitted that a “milk substance” liquid that was “99-percent water,” but contained cleaning solution, was being discharged onto the compost piles located on the property.

Cottingim said the town believes that the substance is being generated by a Clark County dairy operation.

NDEP spokesperson Jo Ann Kittrell indicated on March 30 that the complaint was forwarded on to Nye County Planning because the department “does not permit composting.”

The status of the complaint is uncertain. Nye County Planning Director Darrell Lacy did not respond to requests for comment by press time.

Cottingim said the Nye County Commission will evaluate whether the property, located on East Cook Road, has been satisfactorily abated, though specific requirements were not set forth, at a regularly scheduled County Commission meeting on April 21.

The next Town Board meeting in Amargosa Valley is two days later.