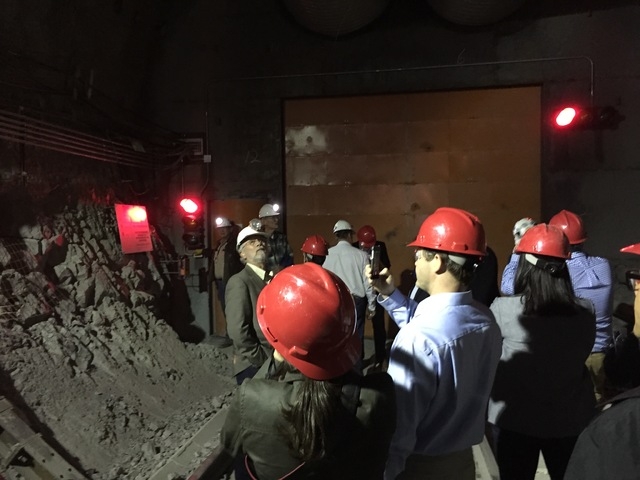 At the Nevada Commission on Nuclear Projects meeting on Tuesday, State Board of Examiners Consultant Marta Adams said that the final supplement to the DOE’s environmental impact statement for a proposed nuclear waste repository at Yucca Mountain is not appealable or capable of judicial review because it’s not accompanied in a record of decision.

“Normally, to be right for a judicial challenge, you have to have a decision that’s going forward and we don’t have that yet. We keep being in a little bit of a limbo status,” Adams said.

The final report issued by the NRC on May 5 is essentially a supplement to the 2002 Yucca Mountain EIS prepared by the DOE and the secondary 2008 EIS.

The NRC’s report on Yucca Mountain however will help Nevada, Adams said, as the state developed new contentions for the possible NRC licensing proceeding.

“What we have been able to establish is how inadequate and deficient the document is in terms of addressing the very substantive comments that the state of Nevada made. So that was disappointing on many levels,” she said.

State officials said the report was deficient and said the NRC ignored most of Nevada officials’ comments on the draft that was released in August 2015, as it again concluded that the Yucca Mountain impacts on groundwater over one million years would be “small.”

After issuing the final supplement, Nevada officials said the NRC will have $1 million to 2 million in Yucca Mountain funds left and will need at least $330 million for full licensing over three to five years. The NRC’s board will be down to three commissioners in summer.

“And at that point, we think that it is somewhat likely that a pre-adjudication case management conference could be held. And that would be a very significant milestone for us. So, we are looking at that,” Adams said.

The state of Nevada currently has five pending lawsuits related to Yucca Mountain. Two of them are water cases that are being considered in courts in Las Vegas and Tonopah in which the U.S. challenges Nevada State’s Engineer Jason King’s denial of water to develop Yucca Mountain.

The DOE is developing a consent-based siting program for a pilot storage facility for spent fuel from shut down reactors, a larger consolidated interim storage facility for spent reactor fuel, and a geologic repository at a site other than Yucca Mountain. The initiative is supposed to ensure that communities and states are comfortable with the location of potential storage before it’s constructed.

“And I think all of us are hoping that other initiatives such as this consent-based initiative, such as this new interim proposal will basically take the heat off Yucca Mountain, no pun intended, and get us back to looking at a more suitable geological site,” Adams said.

Meanwhile, the state’s legal team continues to prepare in the anticipation of the resumption of the adjudication process before the NRC.

“We hope it doesn’t happen but we can’t sit on our thumbs,” Adams said. “We have to go forward because we want to be in a state of readiness to continue Nevada’s 25-year effort in this feign.”