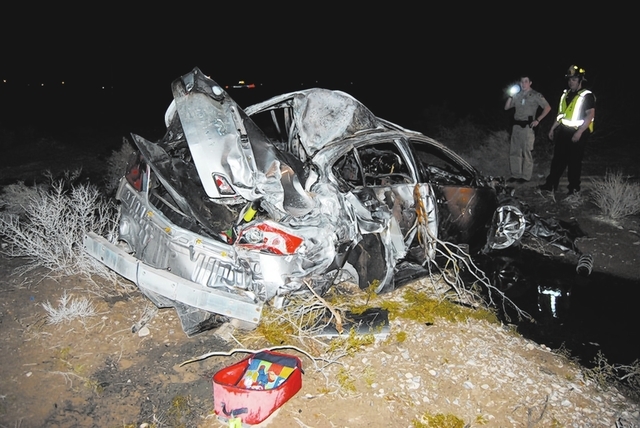 One person was sent to the hospital in critical condition Saturday after their car rolled over on State Route 160 and caught fire.

Pahrump Valley Fire Rescue Services was dispatched to the area of State Route 160 and Simkins Road around 11 p.m. for a report of a vehicle fire.

Fire Chief Scott Lewis said a PVFRS engine was already heading in that direction at the time to respond to another call for service.

Just before they were asked to respond to the accident, they had been dispatched to a report of a fire alarm going off at Nevada Treasure RV Resort. That crew was then directed to proceed to the vehicle fire instead, while another fire engine was dispatched to the RV park.

When firefighters and medics arrived at the scene, Lewis said they discovered the victim’s vehicle had rolled over and caught fire.

“Upon their arrival they found it was a motor vehicle accident, a rollover, with a critical injury and the vehicle was on fire, so they discontinued their response to Treasure RV Park and took care of that incident and we had another engine go to Treasure,” the fire chief said.

A bystander told the Pahrump Valley Times they had pulled the passenger from the wreckage before medics and firefighters arrived on scene.

The victim was then transported to Desert View Hospital before being flown to University Medical Center in Las Vegas for further care.

“The local helicopter was unavailable, so the patient was transported level one to Desert View where another Las Vegas-based helicopter came in and picked up the patient,” the fire chief said.

The condition of the victim was unknown as of Tuesday morning.

The fire at Nevada Treasure turned out to be a small rubbish fire in the resort’s kitchen. Lewis said it was extinguished without any extension to the rest of the building, but noted it did cause light smoke conditions in the area.

PVFRS were also called to respond to another report of a single vehicle rollover earlier that evening near Blagg Road and Florida Street around 8:30 p.m. The driver of that vehicle, however, was said to have declined medical care.

On Sunday medics responded to yet another accident, this time involving a motorcycle on Mountain Falls Parkway. The driver of that vehicle was reportedly transported to the local hospital for treatment.