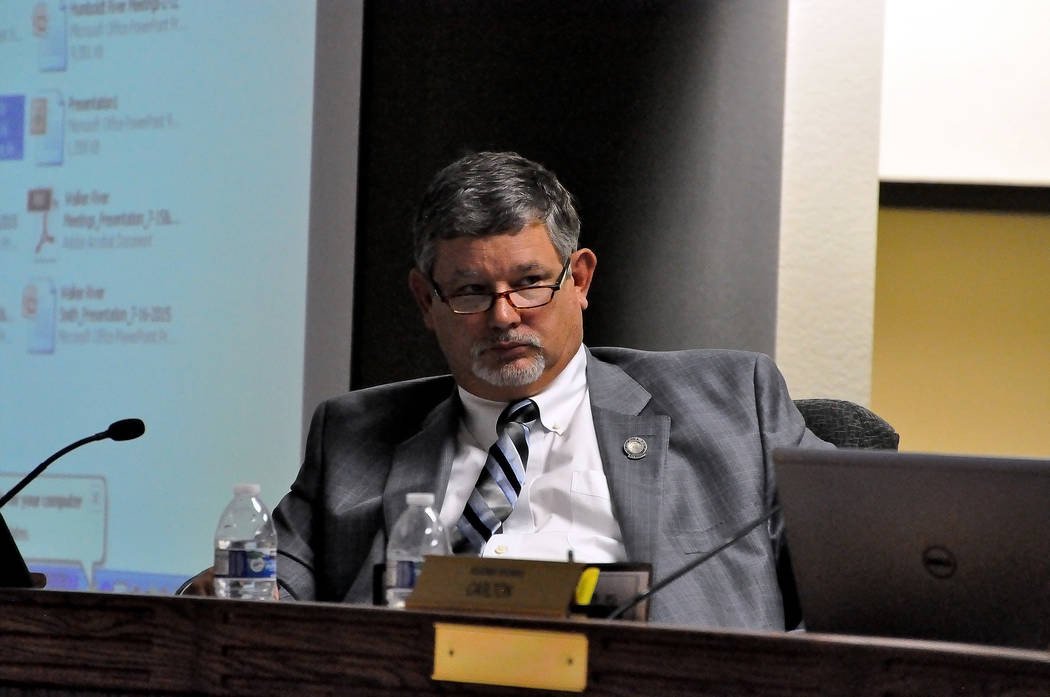 District 36 Assemblyman James Oscarson introduced a bill that address beneficial water use in overallocated basins, critical management areas and in times of drought.

Assembly Bill 209, introduced in the Assembly Committee on Natural Resources, Agriculture, and Mining on Tuesday, revises provisions governing the forfeiture of water rights and aims to conserve water.

“At present, and I’ve seen it so many times, the process that is in place encourages water rights owners to overuse available water resources in order to prove need for future water allocations. This is creating an environment of misuse in places where water is already scarce. We have to ask ourselves, ‘What are we doing?’” Oscarson told the committee on Monday.

Under existing law, water rights holders have to prove their beneficial water rights every five years. A holder of underground water rights forfeits the right if he or she fails to beneficially use the water for five successive years, according to the “use-it-or-lose-it” doctrine.

The bill addresses the problem by removing the requirement for water right owners to prove their water rights in times of drought or in an overappropriated basin.

The Republican assemblyman from Pahrump said the bill had been in the works for eight months and was drafted with input from “a lot of stakeholders.”

“This (bill) is not anything other than an opportunity for us to conserve the water resources we have,” Oscarson said.

The Pahrump Valley has close to 60,000 acre feet of paper water rights and over 11,000 existing domestic wells.

Last year, the Legislative Commission Subcommittee to Study Water held meetings across the state trying to gather input from domestic well owners on the water issues. Oscarson, who was on the committee, said testimonies that he had heard only re-affirmed his plan to address the beneficial use.

“The main drive for AB 209 comes from discussions at meetings for the Legislative Commission Subcommittee to Study Water during the 2016-2017 term,” he said.

Nevada State Engineer Jason King and Sen. Pete Goicoechea, who were also present at the meeting on Tuesday, said they support the bill.

“Really, it’s going to be a tool to the state engineer that will allow him, especially in those areas that have been suffering from the drought, to not require a proof of beneficial use, if in fact, the water right holder can show that he is trying to conserve water,” Goicoechea said.

“Beneficial use is the cornerstone of our water law, we want people to put their water to beneficial use but not in situations like this,” King said.

The bill requires State Engineer Jason King to extend the time necessary to work on forfeiture if the request is made before the expiration of the time and the water right authorizes the holder of the right to use groundwater in a basin where the withdrawals consistently exceed perennial yield or that has been designated as a critical management area, according to the documents.

Assemblyman Justin Watkins said he received a number of emails from domestic well owners urging a no vote stating that the bill is “infringing on their rights through a new form of metering system.”

The bill will have nothing to do with metering wells, and will “only positively” affect domestic well owners, Oscarson said.

“If anything, it impacts domestic well owners in a positive way by keeping the water in the aquifer for them to use,” he told the commission.

The bill is yet to go through a work session where Nevada lawmakers will vote on it.