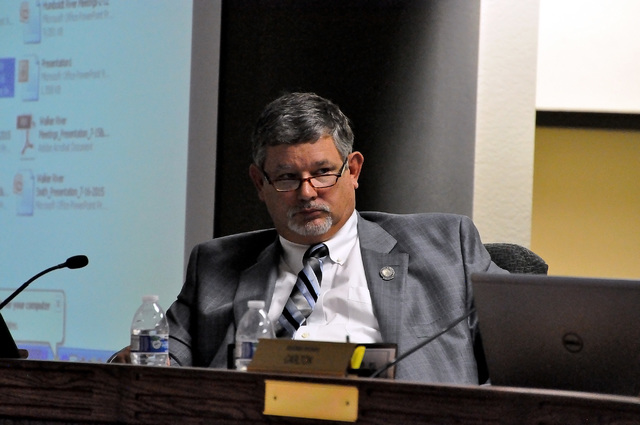 State Assemblyman James Oscarson was selected to lead the Council of State Governments West’s Health and Human Services Policy Committee, which offers opportunities for legislators to learn from policy experts and their peers from across the region. Special to the Pahrump Valley Times

State Assemblyman James Oscarson was selected to lead the Council of State Governments West’s Health and Human Services Policy Committee, according to a press release.

Oscarson was approved along with a slate of policy committee chairs and vice chairs for the 2017-18 biennium. CSG West is a nonprofit, nonpartisan organization that provides a platform for regional cooperation and the exchange of information among legislators of the Western region.

“It was completely unexpected. I appreciate that they recognize the work Nevada has done on health care and look forward to serving in that role for the next two years,” Oscarson said.

The work of CSG West policy committees reflects the substantive issues facing Western legislatures, according to the CSG press release.

Oscarson said that as a committee chair, he will deal with the same issues that he has advocated for, such as retaining medical professionals in rural parts of Nevada.

“I think it’s incumbent on us to make sure we are growing our physicians and nurses and keeping them in the state of Nevada,” said Oscarson, who works in community relations for Desert View Hospital.

Committee chairs provide direction to CSG West staff in the planning and coordination of the policy committee’s agenda during the biennium, lead committee meetings, and ensure committee business is carried out.

CSG West policy committees offer opportunities for legislators to learn from policy experts and their peers from across the region. Policy committees can also recommend resolutions and policy positions for consideration by the CSG West Executive Committee.