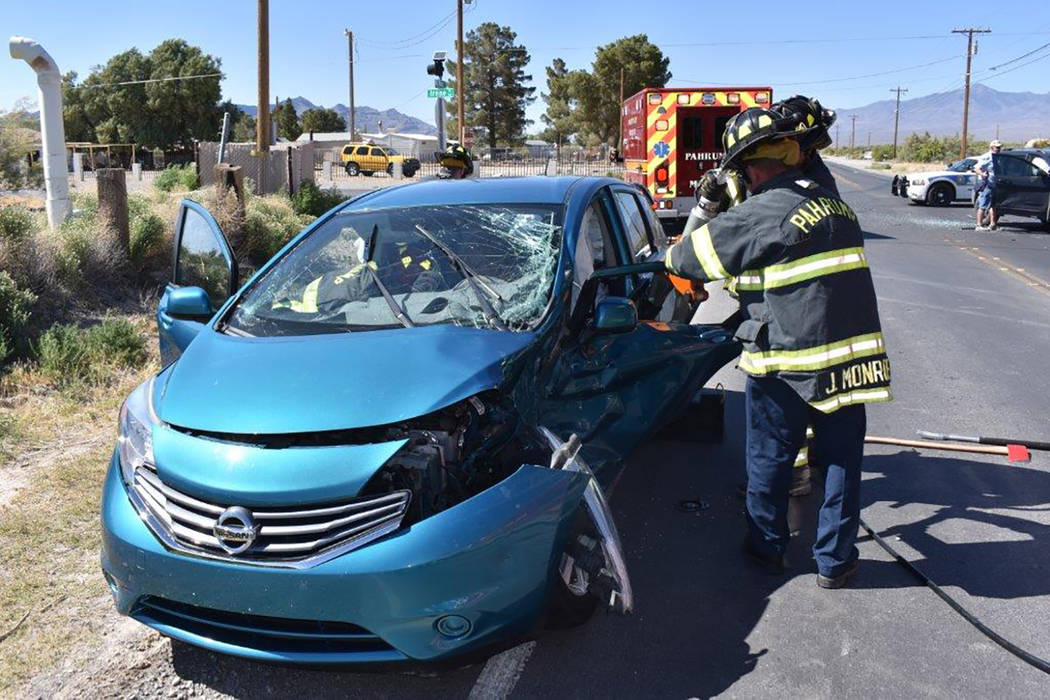 Special to the Pahrump Valley Times Fire crews were forced to perform a door removal to free an entrapped driver after a two-vehicle crash along North Blagg Road at Irene Street on Friday May 25. The driver was transported to Desert View Hospital with non life-threatening injuries.

“Upon arrival, crews found the ATV accident, where the vehicle overturned and ejected the rider,” he said. “Mercy Air 21 landed at the scene, where patient care was transferred and that patient was subsequently flown to trauma. The exact cause of the accident is under investigation by the Nye County Sheriff’s Office.”

Later that same day, fire crews were summoned to the area of North Blagg Road near Irene Street for a two-vehicle crash just after at 3:30 p.m.

“Upon arrival, crews found a T-bone type collision with one driver entrapped,” Lewis said. “Crews completed a driver-side door removal and that patient was subsequently transported to the local hospital.”

A motorcycle crash at the Spring Mountain Motorsports facility prompted another Mercy Air response on Saturday just before 3 p.m.

“The injuries sustained to the rider were consistent with a flight to trauma,” Lewis noted. “Mercy Air 21 was added to the assignment, where it landed at the track and that patient was subsequently transported to UMC Trauma in Las Vegas.”

Lewis said crews were summoned to a slow-moving brush fire along the 2100 block of West Jaybird Street, just before 3 p.m. on Wednesday, May 23, where the blaze was extinguished without incident.

On Monday, May 28, fire crews responded to another brush fire along the 1500 block of West Sutton Street.

That fire was also quickly contained and extinguished without incident.

Within two hours, fire crews were dispatched to the 1500 block of South Hafen Ranch Road, for yet another brush fire.

“Crews arrived on scene to find an approximate quarter-acre brush fire,” Lewis said. “There were utilities in the area and that fire was quickly controlled with no further extension and no injuries were reported.”