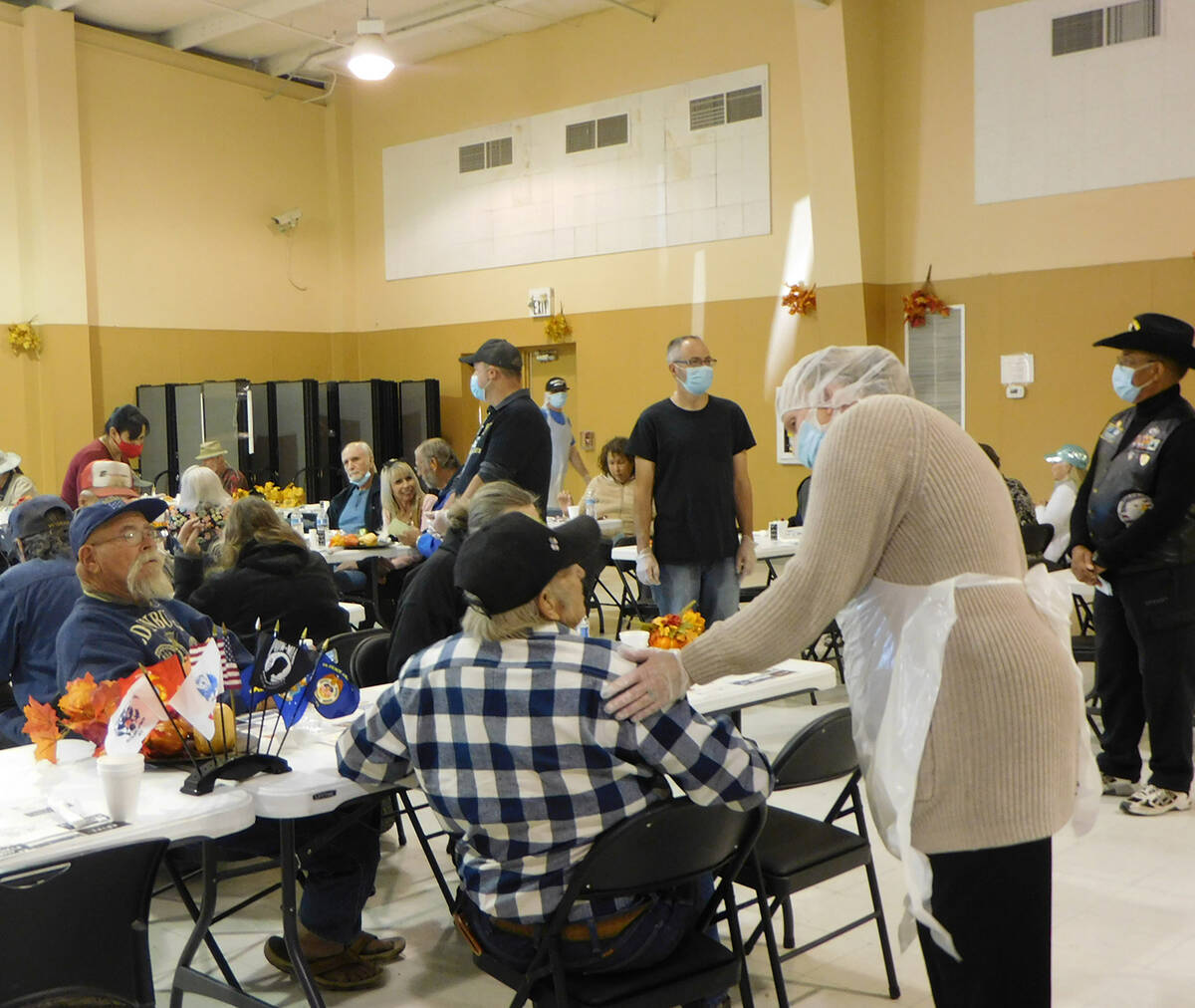 Robin Hebrock/Pahrump Valley Times A volunteer at the Pahrump Holiday Task Force's annual Community Thanksgiving Dinner is pictured checking on an attendee at the event, ensuring he is happy and has everything he needs for the meal. 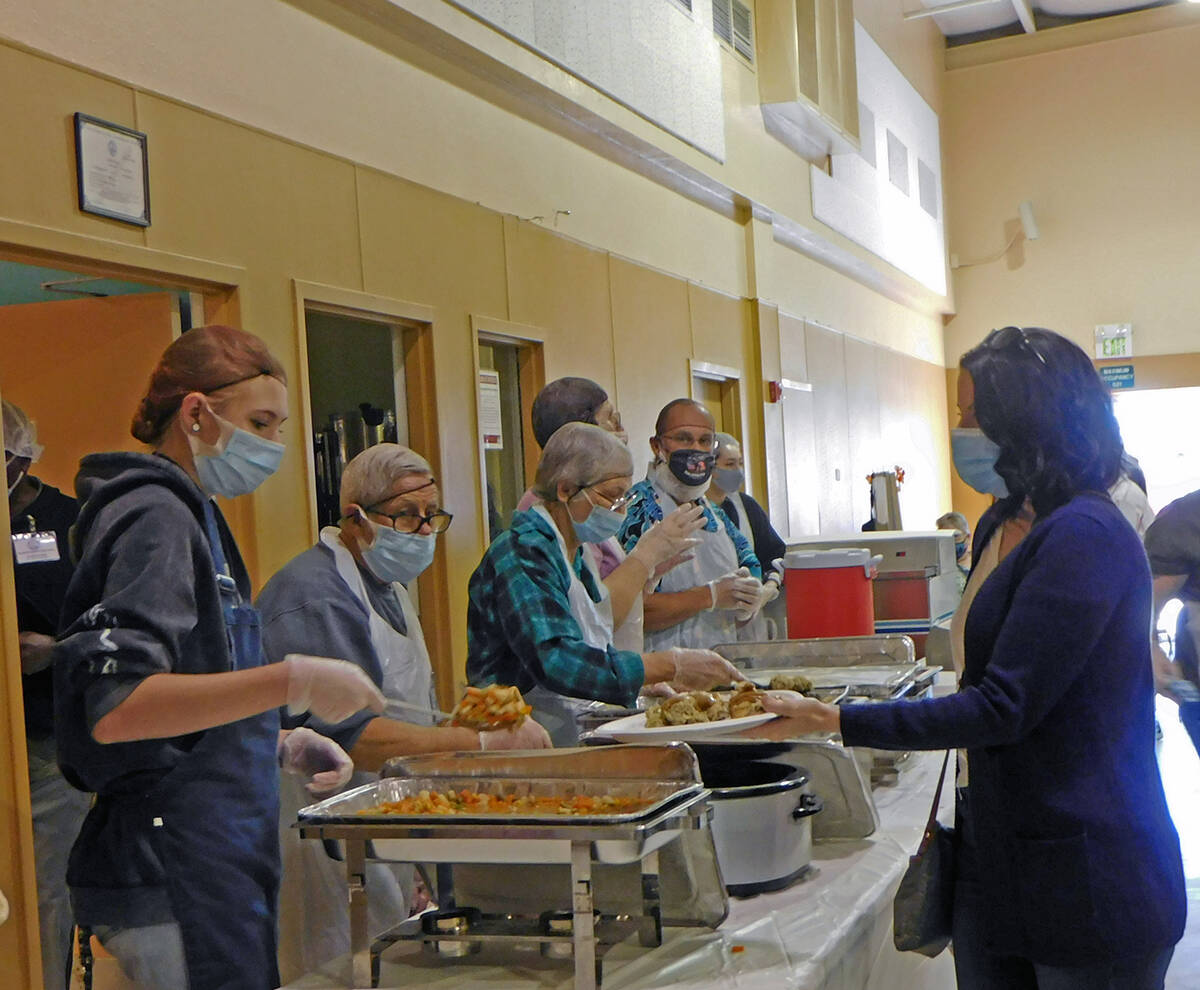 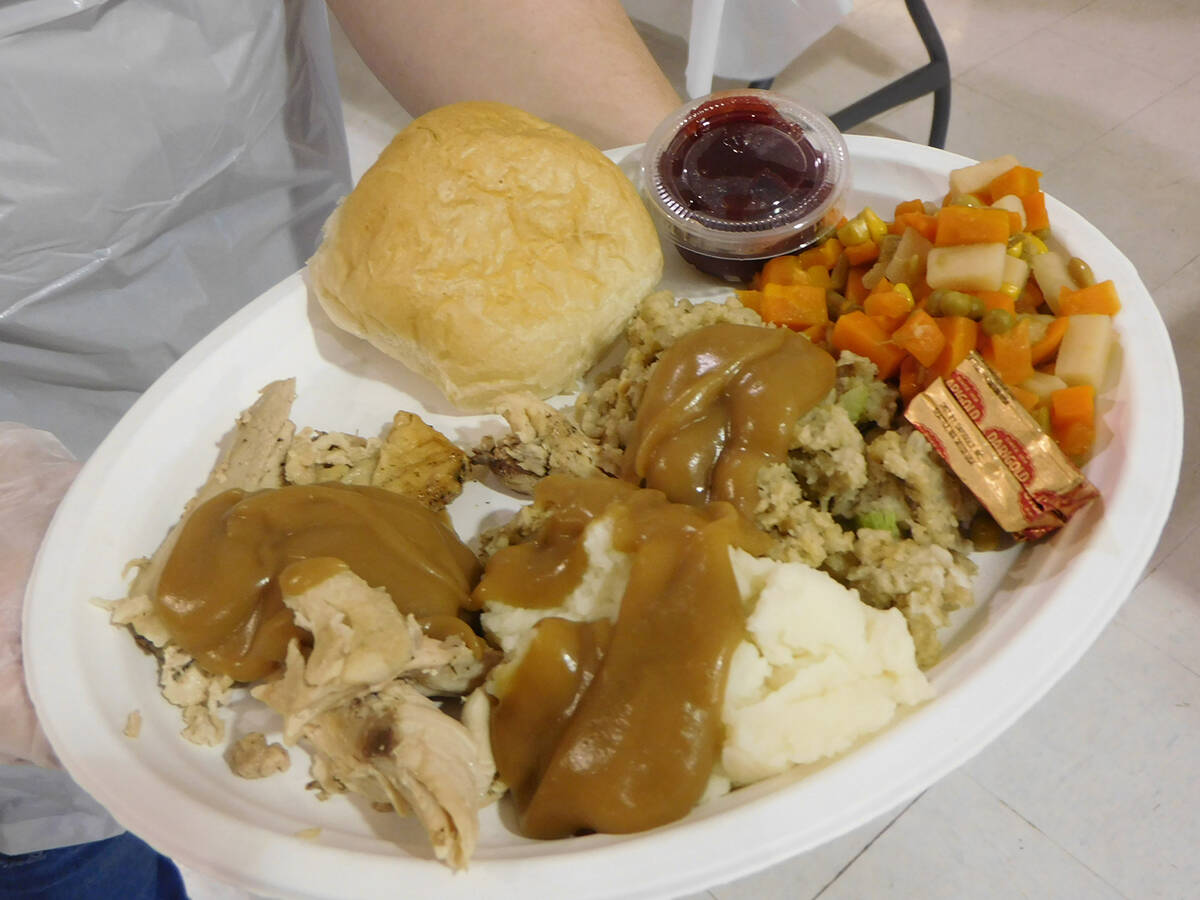 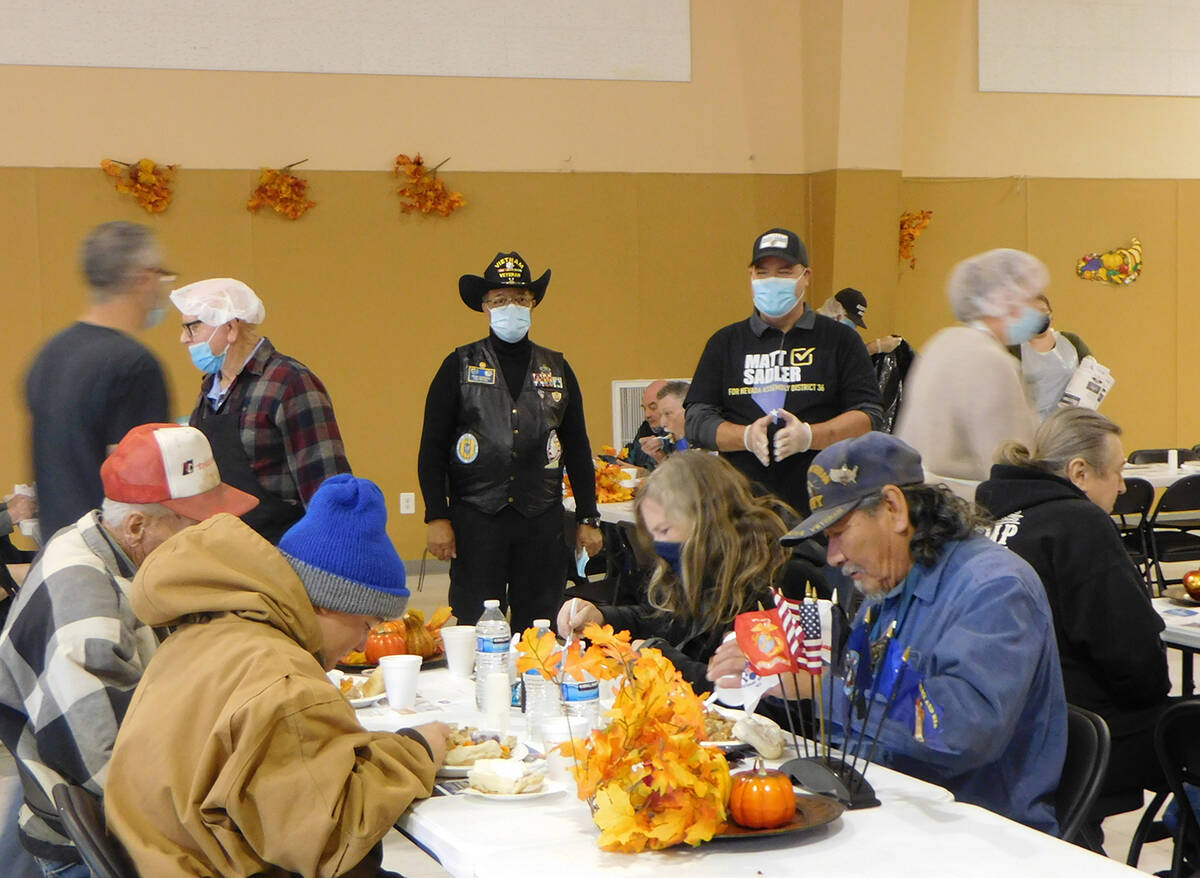 Robin Hebrock/Pahrump Valley Times Attendees at the Community Thanksgiving Dinner were from all walks of life and those from the veteran population were given special honor at the event, with dedicated tables and volunteers to serve their meals directly to them. 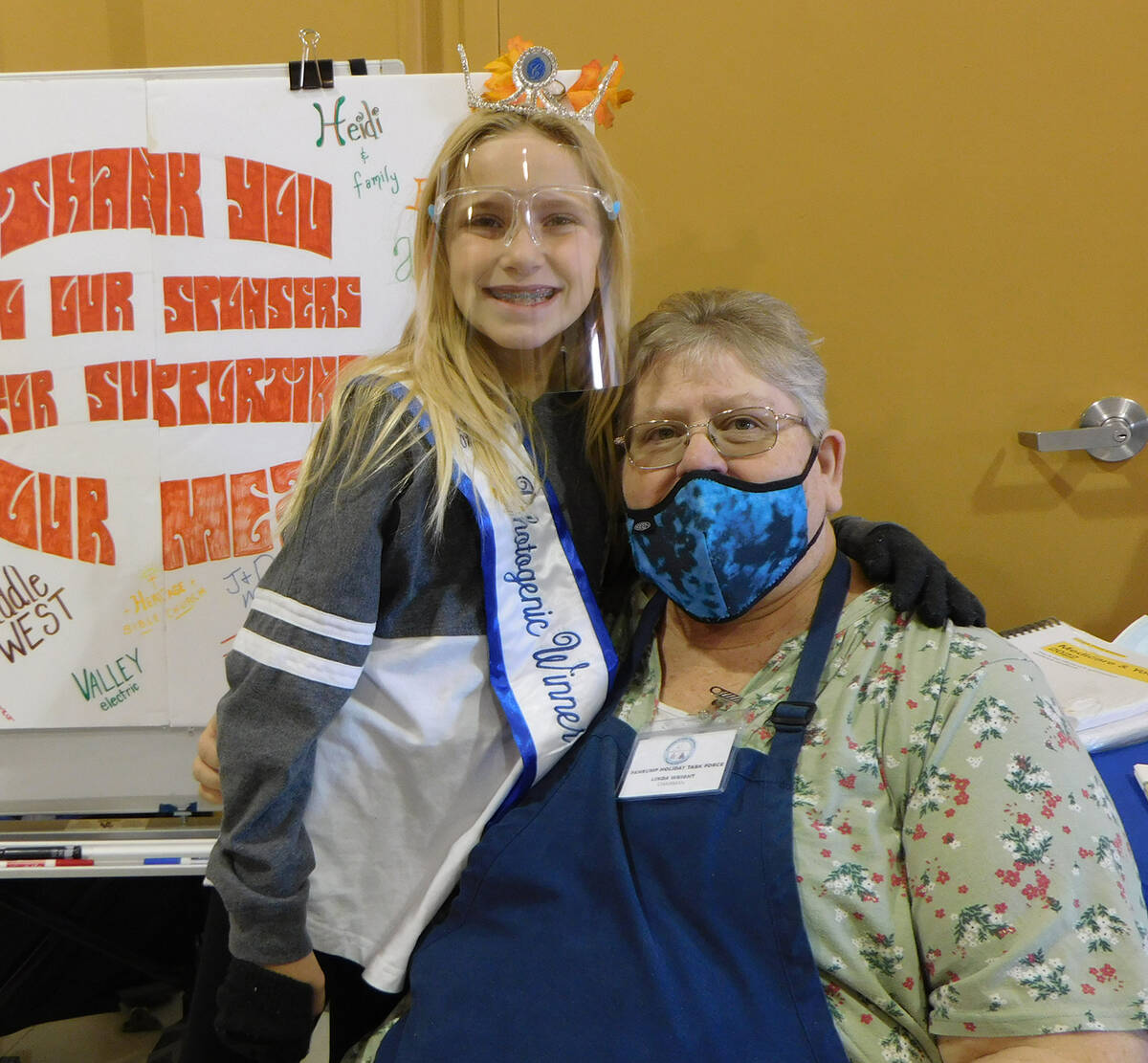 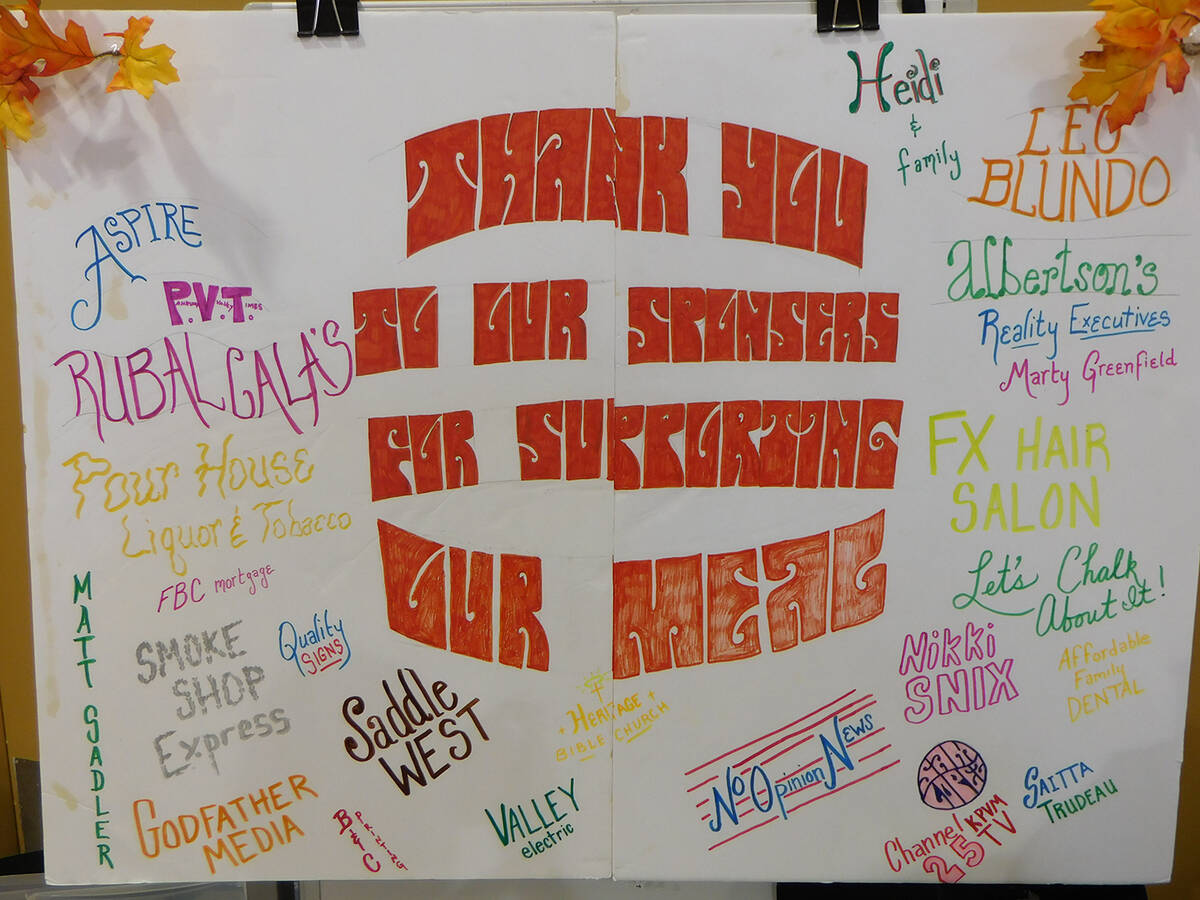 Robin Hebrock/Pahrump Valley Times Donors and sponsors are what make the Community Thanksgiving Dinner possible and a sign thanking those who contributed this year was proudly displayed at the event.

Hosted on Thanksgiving Day, Thursday, Nov. 25, the Community Thanksgiving Dinner was back to its usual community-oriented, in-person self, after having been forced to go to a curbside in 2020 due to the pandemic, and it was obvious that members of the community were overjoyed to see that return to normalcy.

The scene inside of the NyE Communities Coalition was once again one of bustle and activity, laughter and chatter, camaraderie and friendship as people gathered around festively decorated tables to devour the freshly prepared Thanksgiving feast. A battalion of volunteers, 60 in total, was at the ready, manning the greeting station, escorting guests to their seats, serving in the buffet line, cleaning and clearing tables, offering beverages and doing whatever they could to make attendees feel welcomed. After all was said and done that afternoon, Pahrump Holiday Task Force Chair Linda Wright said she was very pleased with the result of the endeavor and she and her team were now looking forward to hosting their next big event.

“We had a great day,” Wright enthused. “We had such wonderful volunteers and a wonderful time was had by all. It was so nice to be back to our traditional sit-down meal where we could enjoy the company of our Pahrump community. It was great to see old friends and meet new ones, and to see happy faces, singing and dancing throughout the day. And the veterans were grateful for how they were treated with honor and respect during the event.”

“Everyone enjoyed the food and the entertainment,’’ Wright continued, noting that the group providing that entertainment, a DJ duo known as J&D, was particularly well received. Though it was J&D’s first time offering their musical stylings to a holiday task force event, it will not be the last. Wright said the music went off so well that people were literally dancing in the aisles and singing along to the tunes, which ranged over a wide array of genres. “The music was just awesome,” Wright commented, “People were asking if J&D would be back for Christmas and of course, we will be delighted to have them for that event too!”

The task force and its volunteers labored over many hours to organize and execute the Community Thanksgiving Dinner, which consisted of turkey, mashed potatoes and gravy, mixed vegetables, rolls, and of course, delicious pie, but the effort was all worth it, Wright said. In the end, more than 700 meals were served, a fact that brings a smile to the faces of the task force members and leaves a warm glow of happiness in its wake.

Turning to the gratitude she would like to show, Wright then offered profuse thanks to all the volunteers who worked so hard on the event, as well as to the many sponsors that stepped up and made donations that helped make the community dinner possible.

Now that Thanksgiving is behind the task force, it must shift its focus to the Community Christmas Dinner, which is slated to take place on Christmas Eve. There will be a buffet-style meal of ham, sweet potatoes, veggies, cornbread and dessert, along with various beverage options, and Santa will be making a stop in the valley just to visit with attendees. “Santa will be there, pictures can be taken and there may just be some surprises for the kids, because you never know what Santa has in his bag!” Wright detailed.

Anyone who wishes to lend a hand with the Christmas event is encouraged to contact the task force, no matter how it is they want to help. Monetary donations are always appreciated but other donations, such as food, and other items necessary when holding a large-scale, public meal, would be very welcome as well, and manpower is also a must-have.

“We need all items for Christmas!” Wright said. “Including lots of volunteers.”

The Pahrump Holiday Task Force will hold meetings each Monday in December prior to the event, on Dec. 6, 13 and 20. Those who would like to get involved are welcome to join in. The meetings take place at 3 p.m. at Heritage Bible Church, 3061 Heritage Drive.

For more information or to sign up as a volunteer email PahrumpHolidayTaskForce@gmail.com