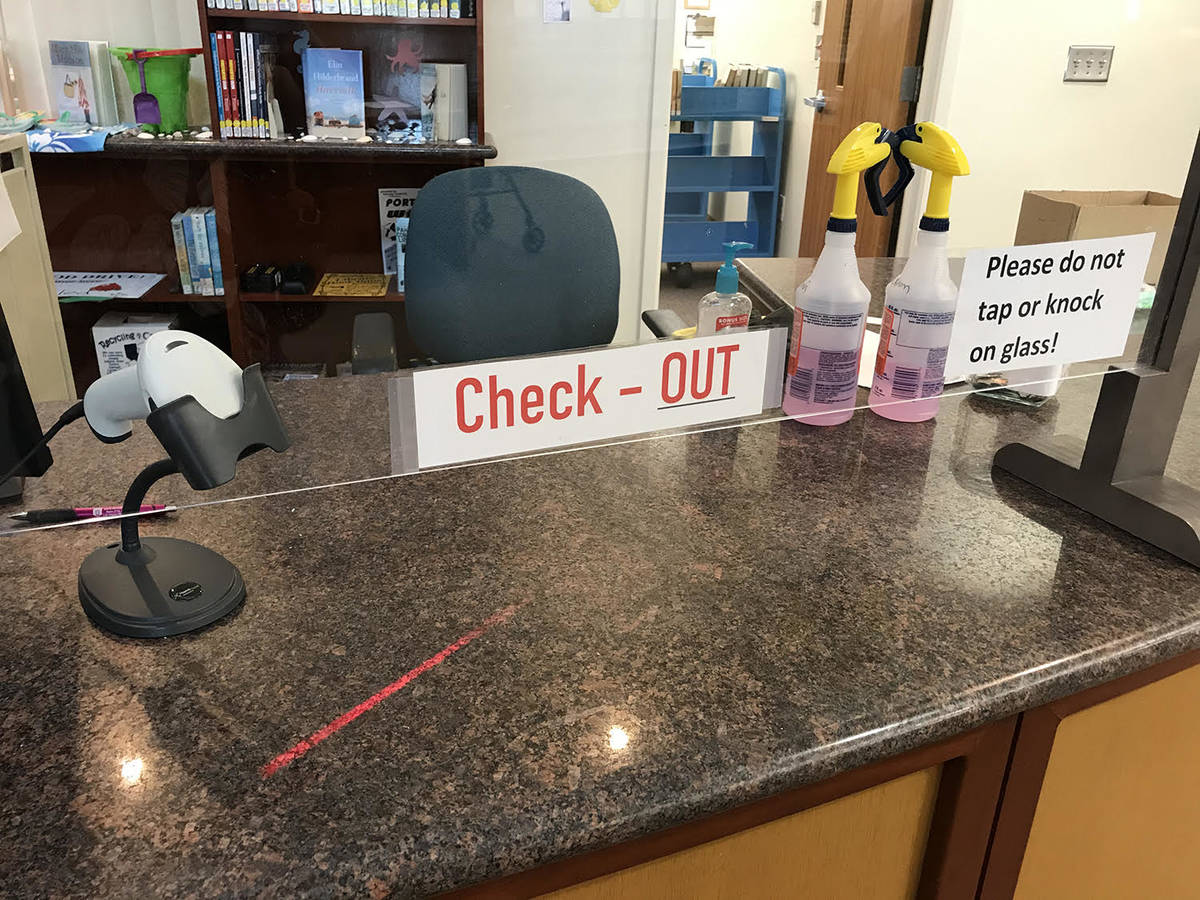 Robin Hebrock/Pahrump Valley Times Patrons visiting the Pahrump Community Library will use the scanner shown to check in or check out their own materials, in an effort to limit the contact between residents and library staff. 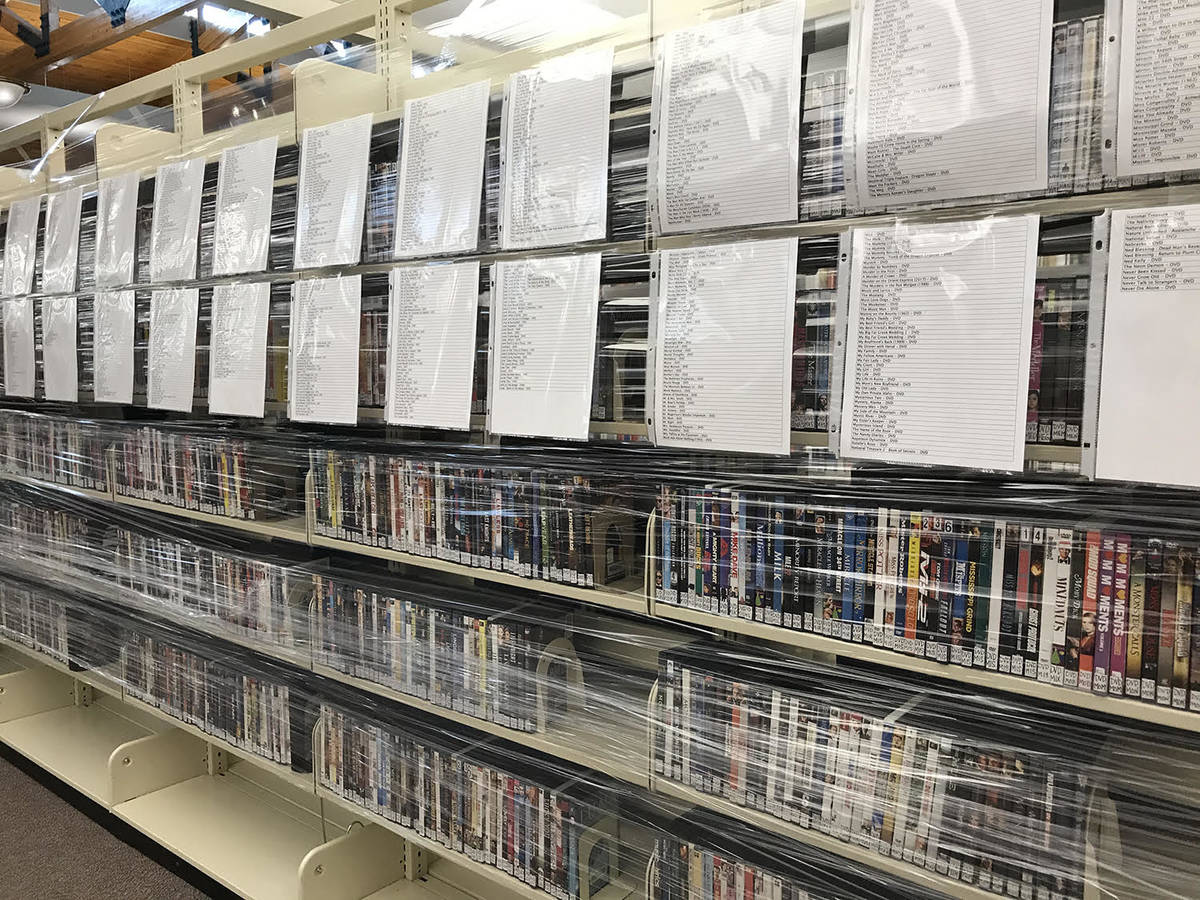 Robin Hebrock/Pahrump Valley Times The DVD section at the Pahrump Community Library has been wrapped in plastic to prevent residents from handling the movie cases. DVDs can be reserved online or patrons can make a list of titles they want and library staff will pull the DVDs from the back. 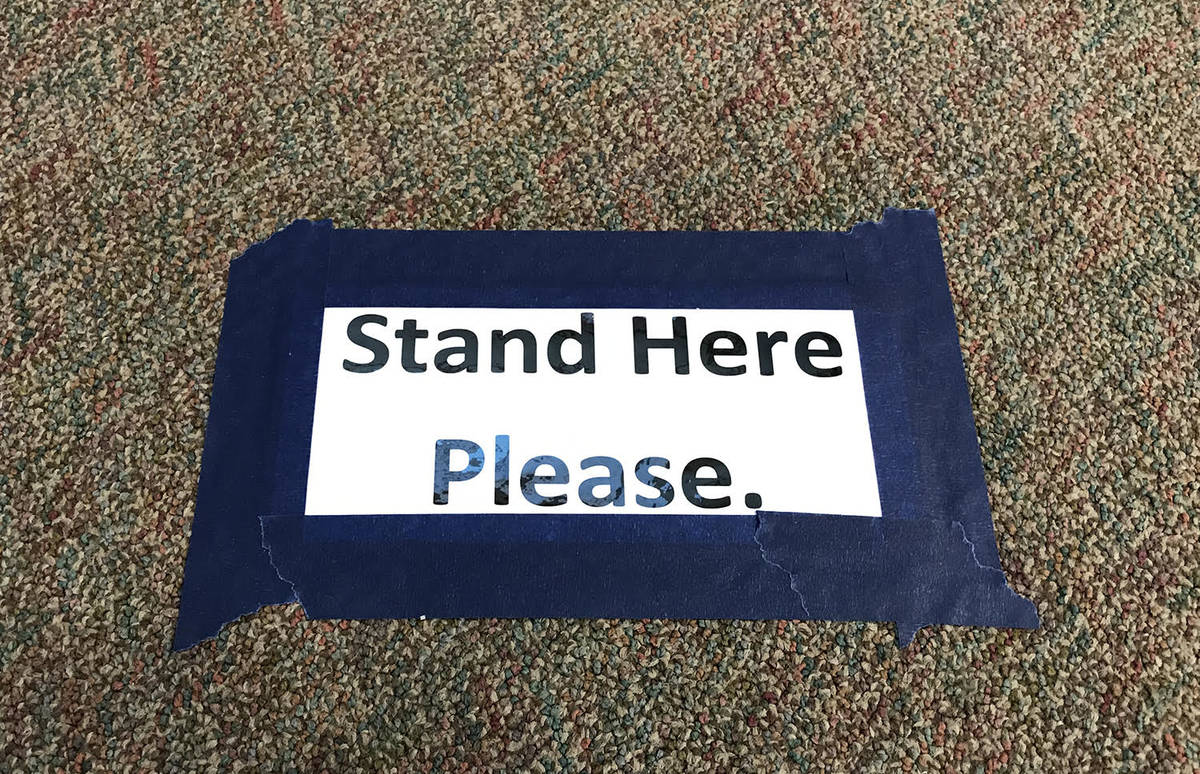 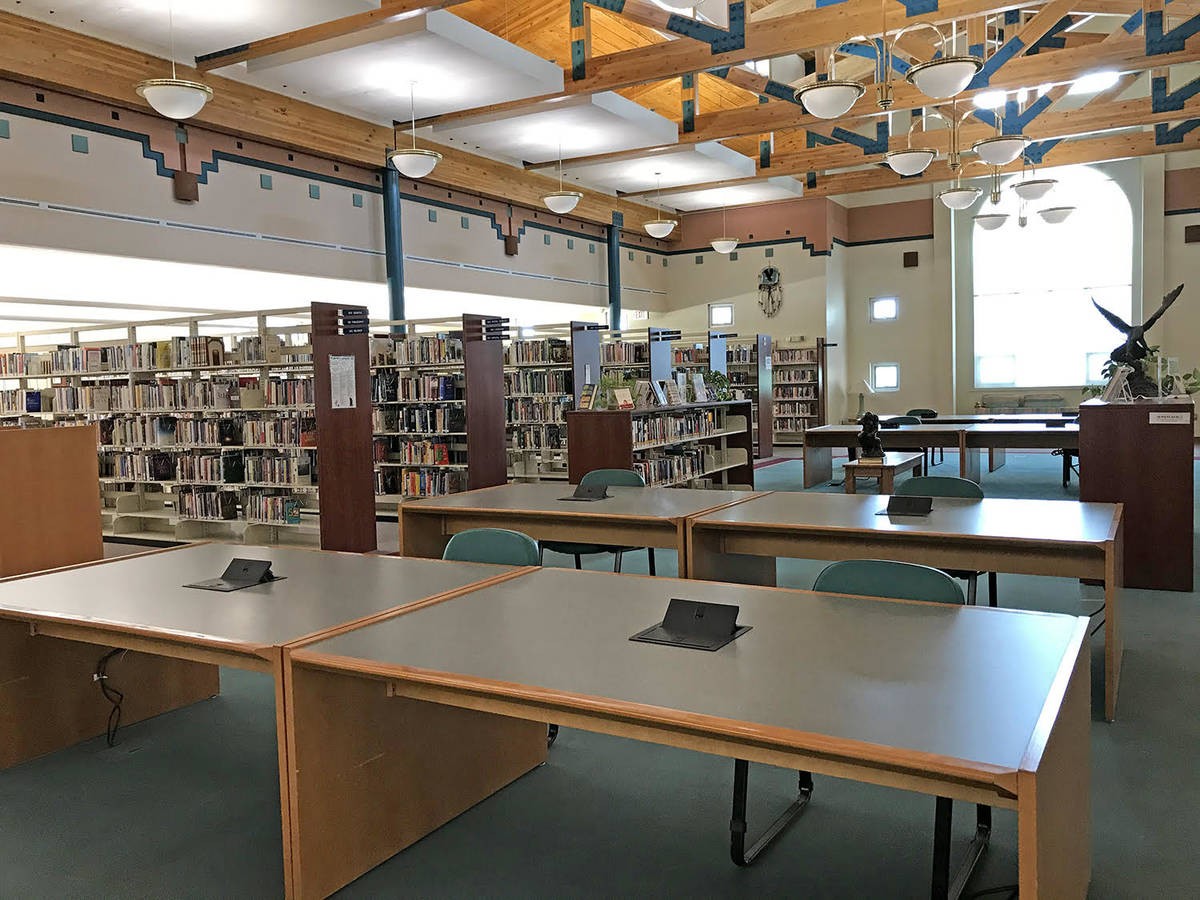 Robin Hebrock/Pahrump Valley Times The large desks in the center of the bookshelves have had chairs removed, to allow for six feet of distance.

The Pahrump Community Library will reopen its doors to the public today, Wednesday, June 3, but when visiting, the experience will be quite a bit different than it once was, with several new temporary guidelines in place, all in the name of health and safety in face of the COVID-19 pandemic.

“We’ll be opening up on Wednesday at 11 a.m. and the library is going to be open on Tuesday through Saturday, at least for the month of June,” Pahrump Community Library Director Susan Wonderly told the Pahrump Valley Times on Monday, June 1 as she walked through the library, pointing out the various changes made in preparation for the reopening. “The hours are going to be 11 a.m. to 3 p.m. and we are stressing 11 a.m. to 12 p.m. for the at-risk, most vulnerable patrons.”

Wonderly emphasized that does not mean others will not be allowed in, it is simply a measure being taken to provide a specific hour to those who may have a greater risk of contracting and becoming severely sick with COVID-19.

“We’re going to let 25 people in at a time and if there are more than 25 people coming to the library at one time, we’re going to be handing out laminated tickets with numbers on them. When one of the people inside leaves, we’ll announce over the intercom system that can be heard outside, so those waiting can sit outside or in their cars, that number one can come in now, then number two, number three and so on,” Wonderly stated.

With the restriction on the number of people permitted inside at one time, settling in at the library will no longer be allowed, with a 20-minute browsing time limit set to help ensure that all those wishing to access the library will be able to.

Library staff will not be handling the books that are checked in and out, either. Instead, the scanners have been placed to face the front of the main circulation desk, behind the newly erected Plexiglas barriers, where library-goers can scan their own materials and library cards. This process will be assisted by library staff, who will be on hand to make sure there are no issues. Once check-out is complete, the patron will be given a small slip of paper with a date stamp on it. “So we’re not going to try to touch anything. We’re trying to make contact as least as possible,” Wonderly detailed.

As for books being checked back in, they will be quarantined for a period of time before being cleaned and returned to the shelves.

The public does still have access to the computers at the library but Wonderly noted that the library is going to try to stress that use of the computers is more for official needs, such as business purposes, applying for a job or filling out unemployment claims, rather than for fun and games. There will be a time limit of 30 minutes, which will be flexible depending on the specific task a person is trying to accomplish. For the time being, the library has also brought out an old copy machine so residents can make their own copies or fax paperwork if necessary. “And during this time, at least for the month of June, we’re not going to charge anyone for faxing or making copies, within reason,” Wonderly explained.

Because the DVD section gets a lot of traffic, the entire section has now been wrapped in plastic, with a list of the DVDs posted on the plastic covering and patrons will not be able to touch the DVD cases themselves.

For the first few days after reopening, Wonderly said DVD check-out will not be available. Once DVDs are able to be checked out again, patrons can go online to pahrumplibrary.org and reserve the titles they would like, which can then be picked up the following day. For those who cannot reserve a DVD online or did not originally intend to get one when first entering the library, they will have to write down, on a provided piece of paper with a throw-away pen, the titles of the movies they would like to check out and the library staff can pull the items from the back.

Going online is also a convenient and safe way for patrons to reserve books. Reserved books can be picked up the following day inside the library or, if a resident prefers not to go into the building, they can pick them up curbside at the back of the library on Tuesdays.

For those who browse through the books on site, there will be black carts set out around the aisles so that if a resident picks up a book and examines it but decides it’s not something they want to check out, they can place the touched book into the black cart for library staff to take care of. There will be no children’s programs or meeting room use available for the time being and all of the nooks in the library are now devoid of cozy chairs, as patrons are not to be settling in for any length of time. Some chairs at the large public desks have been removed, to allow for social distancing between patrons. Computers that cannot be moved six feet apart have barriers between the stations.

Library employees will be wearing masks as well as face shields and there will be constant spot cleaning while the public is visiting along with extensive cleaning after the doors are closed each day. Wonderly said she is hoping that the library will be able to expand its hours in July and eventually, the limited services will be expanded as well.