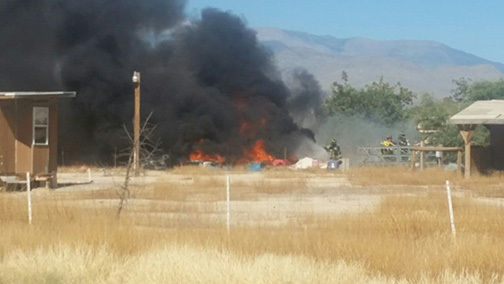 Pahrump fire crews were forced to split up assignments after windy conditions cause a structure fire to jump to adjacent properties early Monday afternoon. No injuries were reported as a result of the fire along the 4500 block of Cheyenne Street. Several explosions were heard by neighbors before flames were sighted. Special to Pahrump Valley Times 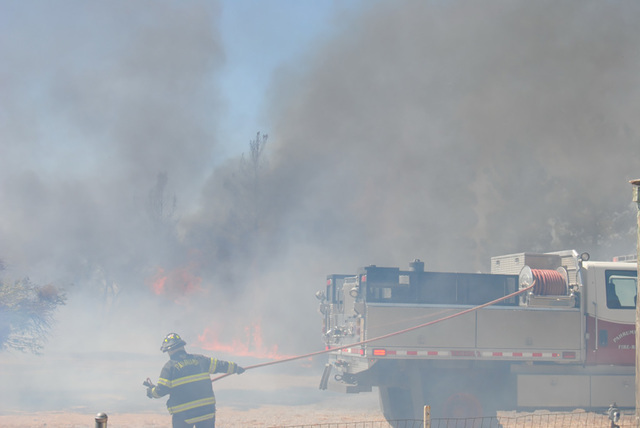 Fire crews were hampered by gusty winds Monday morning after a fire broke out on East Gamebird Road. Chief Scott Lewis said a large raven which landed on an energized power line was the cause of the blaze just after 10 a.m. No injuries were reported, but a wellhouse on the property was destroyed. Special to the Pahrump Valley Times

Pahrump Valley Fire and Rescue crews responded to a structure fire just after 3:30 Monday afternoon on the south end of town.

Fire Chief Scott Lewis said his crews were dispatched to a residence along the 4500 block of Cheyenne after neighbors reported hearing a series of explosions at the occupied debris-strewn home.

“We were dispatched for a report of a structure fire and while en route, there were reports of numerous explosions,” Lewis said. “Upon arrival, we found a heavy fire condition at the rear of the property including a single-wide manufactured structure that had extended to other closely located vehicles, including an RV and several other disabled vehicles.”

“The winds we experienced actually started secondary fires on Pawnee Street, which included both rubbish and brush fires,” he said. “We split the forces up and sent an engine and a tender truck to Pawnee to protect additional exposures. We also committed Engine 1 and a water tender to the Cheyenne address to assist in the primary fire attack as well as exposure protection of the vehicles at the rear of the yard.”

The volume of debris and brush at the residence provided additional fuel for the fire to consume.

Lewis noted that a thorough investigation is underway to determine the exact cause of the explosions and subsequent fire which created black, billowing smoke throughout the area.

“It is my understanding that the occupants were inside of the main residence resting at the time of the fire,” he said. “They said that the structure at the rear of the property was intermittently used for storage more than anything else. We are looking long and hard at what may have been stored in there.”

Lewis also said that it’s too early to speculate what may have been the cause.

“There are a lot of things to consider, such as numerous personal property stored throughout the rear of the yard as well as multiple families living at the primary residence. There’s a lot to digest regarding the investigation.”

Earlier in the day, Lewis said fire crews were dispatched to the 1000 block East Gamebird Road, for what was originally reported as an electric transformer fire.

“Upon arrival, crews found that they had a ground-cover fire extending onto at least one other property,” he said. “It covered approximately a half-acre on the primary property, including large mature trees. The fire also took out a well-house. The investigation revealed it was not a transformer problem but a bird had landed on the lines and essentially caused the fire. There was a local power outage and Valley Electric Association crews were working diligently to resecure power in that area.”

On Saturday two pedestrians were transported to Desert View Hospital following two separate collisions with a car and a bicycle.

Lewis said crews were dispatched to the area of Lola Lane and Highway 372 just before 2 a.m.

Also on Saturday, fire crews responded to a brush fire in the area of Red Butte and Ogallala streets, near the former Willow Creek golf course.

“Upon arrival, we found a brush fire running along the golf course,” he said. “There were no immediate exposures and a fire was extinguished in short order. The cause of that fire is suspect in nature.”

The following day, Lewis said fire crews were summoned to the Walmart parking lot after dispatchers received reports of a fuel spill just before 1 p.m.

“Upon arrival, we found a malfunction of a reserve fuel tank,” Lewis said. “The fuel tank was designed to fill the primary tank but ended up spilling approximately 10 gallons of fuel on the ground. Spill control was put into place and the spill quickly was mitigated.”